Having spent eight years watching House, we're both more or less fully qualified doctors. Get us a crash-cart, STAT!


Matt: Do you think you've actually learned anything medical from the show? It still amazes me that the show can be so technical and filled with medical jargon and yet still be entertaining to the uninitiated.

Ed: There are certainly medical terms I'm familiar with now. Pulminary embolism. Contusion. Sarcoidosis. (Someone always thinks it's sarcoidosis. It's the new lupus.) I heard Dr Drew interviewed recently (who is apparently a real doctor, despite being known by his first name) and he said that House drives him nuts because the things presented as medical breakthroughs are actually perfectly commonplace. So like at the start of season three when House cures the guy's vegetative state with a Cortisol injection, any doctor would do the same. It'd be the first thing they'd think of.

Which raises an interesting question: I know they have doctors on as consultants and whatnot, but in order for House to make believable breakthroughs, don't they have to be REAL ones, and how are the writers coming up with so many? 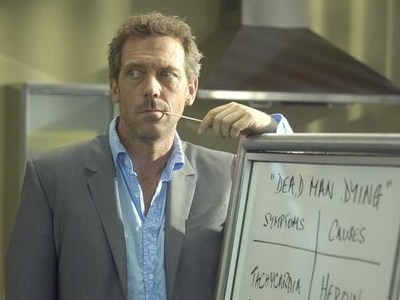 Matt: There is actually an excellent blog which reviews the medicine in each show. It's really interesting; Dr Drew (if that IS his real name) is right - most of the time the solution is something that would have been explored early on. The real bugbear though - not just in this blog but for a mate of mine who is a real-life clever surgeon-doctor person - is that all the characters do everything. General consensus is that it's ridiculous for the Diagnostics team to then treat the patient AND then also be the ones to perform surgery on them. I'm no Dean of Medicine, but I can see his point.

I don't think they're real breakthroughs in each episode though - in general, the solution isn't that a new cure has to be found, it's just identifying the illness when it has coincided with something else that has happened to the patient. So it'd be a pulmonary disease that will present differently because...oh, did we mention? The guy got shot in the heart when he was 12. Or something like that. You can spot them as well throughout the episodes - things like a patient having a metal plate in his brain and therefore they can't get an MRI which would, presumably, give them the correct diagnosis straight away. The writers often seem to make the diagnosis a challenge for the team, rather than make it a rare illness or something.

For me, the clever writing shows when, at the very end of every episode, I'm totally there with House thinking "Oh my god - of COURSE it's a cerebral vasospasm!" even though I have no idea what one of those is. It's some brilliant writing that makes you excited about a revelation you don't understand. 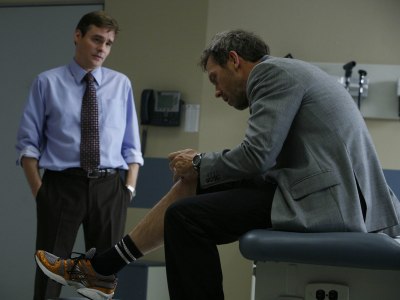 A clear case of legular scaboplasty, treated by picking at it till it bleeds.

Matt: Even after all this talk about the show being refreshing, I think we've both felt that the show has been feeling a little more tired in these past couple of seasons. Do you think it should have ended sooner that it is or can it still pull off a rare 'brilliant' finale?

Ed: I think it can definitely pull off something great, but it's certainly ending at the right time, put it that way. Last season and this were a bit disappointing overall, and I think they realise there's not much further the character can go.

Matt: The penultimate episode had easily some of the best acting in the whole show - especially Wilson breaking down in the car. And that ending was heartbreaking.

Ed: The bit where he has to go back to jail was an insanely good bit of plotting.

Matt: Kind of harrowing too, but all the way through it I couldn't help thinking "Can't Wilson just own up to this and take the heat?" The only evidence they had against House was that his name was on the tickets - if Wilson had been a bit more quick-thinking, he could have taken the blame, got a quick slap on the wrist (no more than that - these are the actions of a grieving, dying man, after all) and still get to spend his remaining time with House. Stupid Wilson. 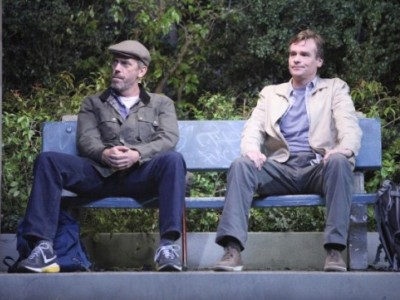 Matt: So, ahead of the actual finale - how would you like to see the show end? What's on your finale wishlist?

Ed: I say last episode has to be House and Wilson on the run, Thelma and Louise style.

Also, I want Kutner to be a ghost. Not some bullshit flashback or hallucination: an actual ghost, with a sheet over him, floating around and going "ooooooooo!" From the synopsis I've seen, they're going to be treating a drug-addicted patient, which makes House question his own life etc etc. Makes it unlikely that Wilson will actually be dead I suppose, given that it presumably takes place straight away.

Matt: For me, the big running theme is House vs God. I'd quite like that to come into play. The only way for the finale to be a fitting end to the whole show is if it addresses the big question and get all existential on House's ass. I want there to be some element that might suggest to House that there's a slim chance that he might be wrong about the whole 'no afterlife' thing - to have something that he can't explain...only for him then to have been right all along. Like if he could cheat death, or cheat Wilson's death or something.

Ed: This might be an opportune time for me to show you this. 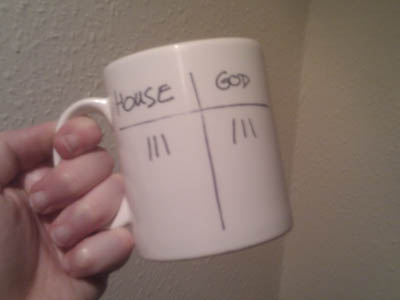 I had it custom-made and I stand by that decision.

Matt: You said somewhere before that House shouldn't be happy at the end of the show, but I think, more importantly than that, he should 'win'. Because that's what he always does. He should be presented with some big problem/dilemma and find a smart way to get out of it with a moment to spare. House checkmates God.

Obviously I'm not hoping for some overblown deus ex machina moment, and he doesn't have to have a happy ending, but something like the last show's finale was great. Work himself up over a problem, drive a car through the wall and then end up on a beach somewhere like he doesn't care. That's House all over.

In part three we'll take a look at the series finale, after we've both watched it. (While holding each other and crying.)
More:  House  Parliament Of House  Hugh Laurie  Sky 1  FOX
Follow us on Twitter @The_Shiznit for more fun features, film reviews and occasional commentary on what the best type of crisps are.
We are using Patreon to cover our hosting fees. So please consider chucking a few digital pennies our way by clicking on this link. Thanks!