You'll all have heard of The Shiznit's Project Mayhem, no doubt. Show Fight Club in a cinema and get people to do stuff for it and bring photos along. That's all well and good, but here's something much more earthy, more real. The journey of two men who each decided to watch four seasons of Mad Men in a concentrated period, then talk about it a bit. We give you Project Mad Men. #projectmadmen


In the spring of 2012, two men embarked on the same mission. Unbeknownst to each other, they had decided to watch all four seasons of Mad Men in advance of the season five premiere at the end of March. One had seen them all once before, one had not.

As anyone familiar with the Sterling Cooper family will recognise, sustained viewing presents you with questions. With each seeking enlightenment and guidance, one man said to the other: "Shall we email each other about Mad Men a bit then turn it into a feature?"

The other man straightened his tie, drained his whiskey tumbler, and said: "Yeah, all right then."
Ali: I've basically spent all day laughing at Matthew Weiner's son being called Marten Holden Weiner.

Ed: How do you pronounce Weiner? Is it Weener or Whiner? How much would this detail contribute to how much he got bullied at school, I wonder?

Ali: It's got to be Weiner as in 'weener', if only because it makes the discovery of his son's middle name all the more amazing. 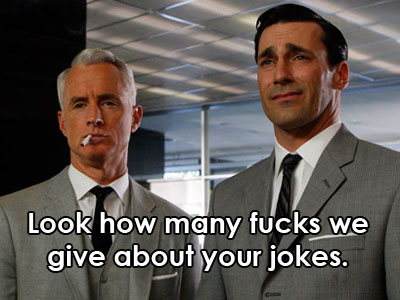 Ali: How much of an impression did Mad Men make on you? Because I'll be honest, after I burned through all four seasons in a month, I'm basically channelling Don Draper (and failing, obviously) in everything I do; the way I dress, the way I drink, the way I love the ladies. It's terrifying, really. No show has ever had this effect on me.

And by 'terrifying', obviously I mean 'pathetic'.

Ed: I do remember cursorily dismissing someone at work once in what struck me at the time as a Draper-like manner, despite having no authority to do so. Otherwise it's just the Scotch at 10am.

I like the way they're able to function perfectly well and make important decisions after like three belts of whiskey in the morning. And drive cars. I would be a ridiculous, stumbling mess after that.

Ali: That's why they're called 'Mad Men'. They're so bloody zany!

It's tragic the lengths I'll go to in my efforts to Draperize my life. At a recent poker night - an extremely classy one, you understand - we attempted to make and drink some Old-Fashioneds. Cue a last-minute dash around the Tesco Metro in Hammersmith Broadway and me asking every off licence in a five-mile radius if they had any Angostura bitters (despite not actually knowing what they were). In the end, we had to make do with a bottle of liqueur we bought from a Polish shop, because it had the word 'Biteres' on it. That's basically the same thing, except it tasted like soil and I felt like a right old Pete Campbell. 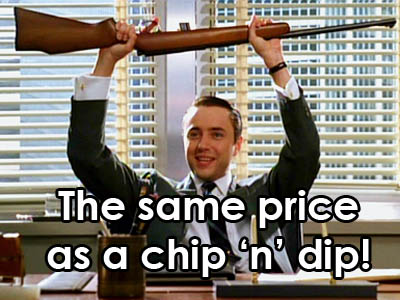 Ali: What do you love about Mad Men?

Ed: I love the fact that it's so much cleverererer than I am. Every time something subtle or nuanced happens, I feel like there are about three other levels of meaning on which I'm failing to appreciate it.

And I love the fact that I thought I knew loads about the 60s through being a Beatles fan and having read about it, but in fact I knew nothing, because I'd never considered the people who worked office jobs and lived normal lives, rather than dancing naked in fields off their mash on acid, and how they experienced all the social change. Don's occasional interactions with the counterculture (which seems to be largely something happening to other people until he stumbles upon it from time to time) are just brilliant: like with the beatnik guy in "Babylon", season one. Don goes to the beat poet place and doesn't even try to pretend he fits in; just wears his suit and tie and sits there like a hero, telling the guy to go get a job.

But the ironic thing is, Don dresses and acts like a businessman but he's incredibly creative; quite possibly a genius. He sees things a different way from other people. He would actually make a much better hippy than the hippies. 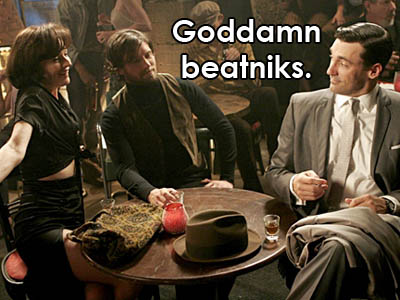 Ali: Personally, I love that it's all about the world of work. Usually in programmes, a character's job is almost an afterthought - unless they're a psychic detective or zombie window cleaner or something. Every episode is usually spent trying and failing to explain why said character isn't actually at work when they should be. I never quite buy it; that "Don't any of you people have jobs?" factor.

Mad Men, on the other hand, is all about business. I love that the show's writers don't shy away from openly discussing the mechanics of how the advertising business works - the snappy abbreviations, the accounts, the creative, the finance, the pitch meetings. It fascinates me in a way I never thought possible - it's actually made me respect the advertising industry. Only those cool guys in the 60s, though. I don't think the Go Compare singer has much in common with the chaps at Sterling Cooper.

Furthermore, I love that Don Draper IS his job. Everything he does is reflected in his work to some degree, and vice versa. Not in that awful, Slumdog Millionaire-style contrived way, where Life Experience A directly influences Work Assignment B, but in a far more subtle manner - you always feel the character is listening and learning and growing ever more complex.

Ed: And there's a reason why he is his job: he didn't exist before it. His identity was a blank slate and his work defines it totally: it's the only place in his life where he is truly Don Draper and there's no trace of Dick. (Snigger.) 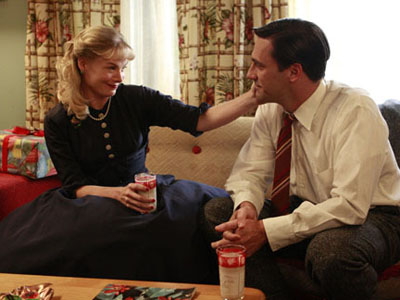 When he's in California he's all Dick.

Ali: And of course, Jon Hamm is so brilliant at keeping all this contained just beneath the surface, it's utterly mesmerising to watch him in action.

Ed: Look at the season four episode where you flashback to when he got the job at Sterling Cooper, and he was a fur salesman badgering Roger for an interview. You've never seen him even slightly unsure of himself before, but he plays the body language in such a subtly different way. At that point, before Henry Cavill got the gig, I decided Hamm should play Superman in Man of Steel, because you saw in just one scene that he could play Superman and Clark Kent. (I later went off the idea.)

Ali: You're bang on about the flashback episode. Young Don/Dick scenes are fantastic, because the way in which Jon Hamm differentiates between his past and present self are incredibly well done - the change in demeanour is astounding. You can tell from his facial expressions alone he is not yet the Don we know and love/loathe.

Also, I happen to think goofball Jon Hamm is just as wonderful as deadly serious Jon Hamm, and the scene in which he starts laughing in Kristen Wiig's face during sex in Bridesmaids kills me every time.

And for the record, Jon Hamm is too good for Superman. Superman doesn't smoke.

Ed: True, but he does have a secret identity.

In part two of Project Mad Men, we'll address such pivotal issues as why Pete Campbell banged the German au pair, how Mad Men deals with the key cultural events of the 60s, and the size of Joan's rack. Join us again later this week.
More:  Mad Men  Jon Hamm  Jessica Pare  Christina Hendricks  Vincent Kartheiser  Elisabeth Moss  Alison Brie  Project Mad Men  AMC  Sky Atlantic  Netflix
Follow us on Twitter @The_Shiznit for more fun features, film reviews and occasional commentary on what the best type of crisps are.
We are using Patreon to cover our hosting fees. So please consider chucking a few digital pennies our way by clicking on this link. Thanks!