There are two types of people in this world: people who are Don Draper, and people who aren't. In part two of Project Mad Men we focus on the second lot. Losers.


Ali: We've talked a lot about Don, which makes it sound like Mad Men is a one-man show, when it's anything but. Who's your favourite Non-Draper?

Ed: Salvatore Romano for the first three seasons. I liked the fact that if he worked in an office with you or me now, we would just presume he was gay. I'd pretty much take it as read, in fact. But back then, no one even considered it. His whole arc was so deftly written; introducing little details here and there rather than hammering it home. The scene where he acts out the Ann-Margret bit for his wife in their bedroom and you see in her eyes that she suddenly realises he's gay is just sublime. It's like a perfect little one-act play. 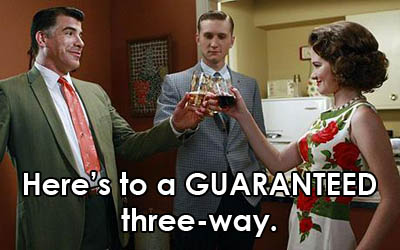 Ed: How about you for the other characters?

Ali: My favourite Non-Draper is Peter Campbell. One of my favourite things about Mad Men is how the writers steadfastly refuse to create archetypal characters, and no one is left in any particular pigeonhole. The complexity of Don is there for all to see, but it's less obvious in the way Weiner and co have written Pete's character arc. I'm sure I wasn't alone in thinking he was the cookie-cutter snivelling villain in season one, and we were told us much by Bert Cooper that he was only hired because of who his parents were. But as the show progresses, Pete becomes less and less of a villain and more of a naive, petty young man, who craves Draper's approval and will do anything - including threatening Don's existence - to do it.

Even when taking the characters in different directions than you think, Weiner and co (honk honk) don't rest on their laurels. Season three is Pete's best. Just when you think he's actually an all right kind of guy, he bangs an au pair. Shit, you think, and we're back to square one. But then there's that superb scene where he all but breaks down in front of his wife and 'confesses' ("Trudy... don't ever leave town without me again"). It shows maturity, sure, not in the finger-pointing, 'This is how he should behave' kind of way, but in a way unique to Pete. He's still Pete the cheat, but he's not the same guy you knew in season one. And why would he be? That was three years ago. 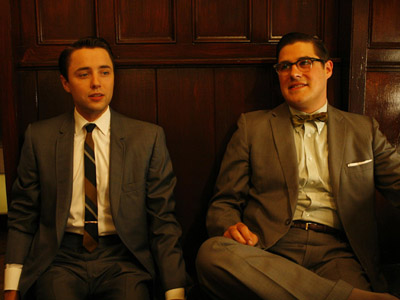 Ed: With the banging the au pair thing, what do you think Pete's motivation is at first, when he offers to sort out the ruined dress? Seemed to me that he was initially just doing a genuinely altruistic thing, though he wouldn't process it as such. Then when he got it to the store and the woman wouldn't let him exchange it, it provoked his natural sense of entitlement to anything he wants. When he gave it back to the girl, I didn't think he especially wanted to sleep with her; it was more just that he felt he deserved to.

Ali: I think the answer to any question about Pete's motivation is 'What would Don do?', which incidentally, would make for a brilliant bracelet or tattoo. There are seeds of him wanting to 'do the right thing' in that episode, trying to better himself and be chivalrous, but ultimately his default setting when ruffled is 'seek and destroy' and he resorts to type, even though he's not really into it.

Although the writers are always careful not to have characters play to type, the characters themselves often strive to be stereotypical versions of themselves - Pete the slick, sharp-suited businessman, Roger the playboy, Peggy the prick-kicking female copywriter. It's down to the writers to deflate that, and they always do.

What do you think of Peggy as a character? I think it's quite interesting that Matthew Weiner says Mad Men is basically about Peggy as much as it is Don. I think we can both agree that her 'fat' make-up at the end of season one was fucking atrocious, right? 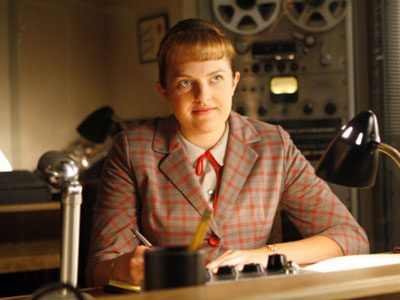 Ed: I think Peggy is there to show women's progress, which is obvious I guess. The main way they do this is in the friction between her and Joan, who has carved out some power for herself by doing exactly what men want her to, ie make them think she wants to sleep with them, and she hates Peggy for being able to succeed on her own terms in a way Joan never thought possible, even outshining the men. (She's a better creative than Kinsey for example, who's actually a bit of a clodhopper.)

I have a hypothesis about Don and Peggy: Don is not a sexist in the way that the rest of them are. He just cares about the work. He considers women his equals: it's just that none has brought him any worthwhile ideas before Peggy did.

Ali: My favourite bits are when Don bangs his secretaries.

I fear these contributions of mine are surface gloss only.

Ed: Surface gloss is most welcome. I'll bring it down to your level, if you like: my, Joan's got a big rack, hasn't she?

Ali: I'm sure I can find a Hemingway quote that's some way relevant (as long as it's on the first page on one of his books that has that preview thing on Amazon).

Ed: Lane Pryce I love too. I read an interview with Jared Harris where he said he found the character by imagining that Lane grew up lower-middle class in Liverpool or Manchester, and had his accent drummed out of him at public school, which I thought was a perfect interpretation. Remember the scene where his wife says "it's nothing like London here" and he says "Quite right. We've been here a year and no one's asked me where I went to school yet"? 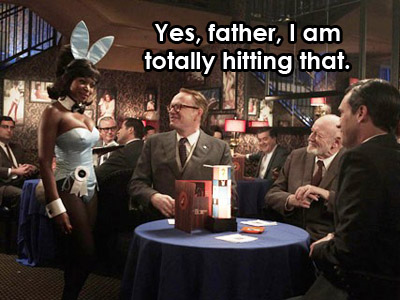 Ed: Let us speak of love. I think the only actual love story in it is Roger and Joan's. They seem to really love each other in quite a touching way. These are men who never find women challenging, because the only ones they meet are programmed to be doormats, professionally and socially. When they do meet one they fall for them hard. Don does for Faye, certainly, and I think Pete does for Peggy, though he wouldn't recognise it as such.

Ali: I think Roger and Joan is going to be the ongoing love story that every programme ever made is required to have - the 'Pam and Jim' of Mad Men, if you will. (Does that make Pete the Dwight? And Harry the Toby? I've confused myself.) As it happens, I think they make an interesting couple and I'm way more invested in those two getting together than I am, say, Peggy and Pete, or even Peggy and Don. Towards the end of season three (I think), Joan calls Roger after she'd left Sterling Cooper and they share a really simple but heartfelt phone conversation - even from that back-and-forth, you know they're better off with each other. But alas, we know that will never be - not only because of husbands, wives and baby drama still to come, but because the show wouldn't have a proper love story otherwise. Not unless we have to pretend we all give a shit about Harry's wife. Shut up, Jennifer. No one cares.

Ed: Peggy and Don must never be allowed to get together. It's the worst possible thing they could do with the series.

What do you reckon to it when they bring in key cultural events as backdrops, like the Kennedy assassination or the Montgomery riots? It's showing the changing face of America in microcosm, I guess, but does it ever seem a bit forced to you? I can never quite make up my mind. 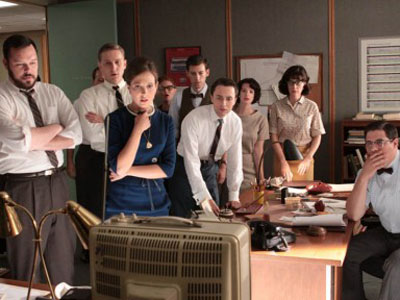 Ali: Contextualising the storylines with real world events works pretty well for me. They're rolled out pretty sparingly and usually always affect the plot in a real way - it's not just like everyone stops and goes "Oh no, Martin Luther King was shot!" and then Ken Cosgrove resumes trying to pull a girl's skirt down. The Nixon angle in season one was interesting in relation to Don's drive and moral compass, as was the plane crash in season two (which affects Pete in a pretty major way) and I thought the Kennedy episode in season three was fascinating. You couldn't really set a show in New York in '63 and not have characters mention it, so I have no problem with it.

I have far more of a problem with a few of the lazy devices used to shoehorn a bit more plot in. I think the worst episode I've seen is the opener of season three, where Don just daydreams the entire scene of his birth but stands there like he's watching some amateur street theatre or something. Also not keen on using Don's diary to use voiceover to explain his mental state - Mad Men has always been good at showing, not telling. It has its faults, but I still love it - haven't seen a bad episode yet. Although the one where they all break in to stare at Bert's period painting is a bit crummy.

Ed: You only think that because you didn't appreciate it on as many levels as I did. It was actually an allegory for ... for ... the Suffragette movement. I can't believe you didn't spot that.

In the concluding part of Project Mad Men this weekend, we'll look ahead to season five and ask the question on everyone's lips: when will Bert Cooper be revealed as a killer robot from the future?
More:  Mad Men  Jon Hamm  Jessica Pare  Christina Hendricks  Vincent Kartheiser  Elisabeth Moss  Alison Brie  Project Mad Men  AMC  Sky Atlantic  Netflix
Follow us on Twitter @The_Shiznit for more fun features, film reviews and occasional commentary on what the best type of crisps are.
We are using Patreon to cover our hosting fees. So please consider chucking a few digital pennies our way by clicking on this link. Thanks!