Quote quiz: Shia LaBeouf philosophy or just a load of old shit we made up?

Shia LaBeouf has outdone himself in the last 30 days, first by plagiarising artist Daniel Clowes in his short film, then by plagiarising various famous apologies in response. Is it performance art of bellendery on a hitherto unparalleled scale? An interview with Bleeding Cool suggests the latter, so we offer you a quiz to see if you can spot the genuine Shia LaBeouf quote from the cod-philosophical twaddle we just made up.


First, LaBeouf enraged critics when it turned out his debut short film, titled 'HowardCantour.com', was lifted almost word for word from Daniel Clowes' story, 'Justin M Damiano'. Then, when he was busted, a contrite LaBeouf offered several apologies via his Twitter feed, until it was discovered that his apologies were plagiarised too - some from famous apologies (including Tiger Woods') and some from Yahoo! Answers for shits and giggles.

With the possibility of a lawsuit hanging in the balance, LaBeouf then took his apology to the sky, hiring a skywriter to write the message 'I AM SORRY DANIEL CLOWES' over Los Angeles. Surely this humble gesture would be the end of the matter? YOU DON'T KNOW SHIA LABEOUF, SON. 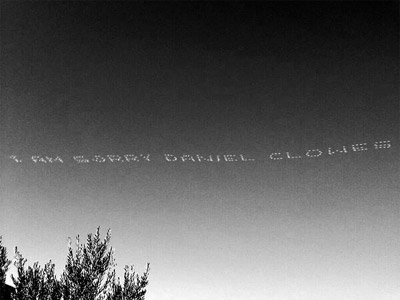 
Writer Rich Johnston from Bleeding Cool still had Shia LaBeouf's email address on file, possibly from back when he was the star of Transformers: Revenge Of The Fallen and before he was an internationally renowned creative genius. Unbelievably, LaBeouf replied to Johnston's email and a brief dialogue began, littered with amazingly idiotic quotes that appear to be LaBeouf's attempt at justifying his light-fingered word filching.

The interview - which you can read in full here - is too good to miss, but before you check it out, we'd like to see if you can guess which of the quotes below are genuine: which were said by Shia LaBeouf and which are just a load of bollocks we just invented off the top of our heads? The answers are waiting for you at the bottom.

1. Shia LaBeouf. It should be pointed out that this is his reasoning as to why he shouldn't face criticism for copying another writer's work, word for word. Because everyone's copying stuff because God made it all first.

2. Just A Load Of Old Shit We Made Up. I'm counting on him googling 'artsy-sounding apologies' at a later date and using it himself, though.

3. Shia LaBeouf. And yes, creation should, if creation doesn't want to get his ass sued by the writer of Ghost World.

4. Shia LaBeouf. Unbelievably. This is way dumber than anything we made up on this page so you might as well give up now.

5. Just A Load Of Old Shit We Made Up. But we were totally channelling him when we made it up.

6. Shia LaBeouf. Well someone just watched Now You See Me.

7. Shia LaBeouf. The great thinker of our time.

8. Just A Load Of Old Shit We Made Up. Although it is actually true.

9. Just A Load Of Old Shit We Made Up. Sorry. I desperately wanted this one to be Shia LaBeouf, immediately after I typed it out.

10. Shia LaBeouf. Obviously. Because all philosophical debates about the concept of authorship and intellectual property end with one or more party declaring "Thug life" before dropping the mic.

More:  Shia LaBeouf  Daniel Clowes  Quiz
Follow us on Twitter @The_Shiznit for more fun features, film reviews and occasional commentary on what the best type of crisps are.
We are using Patreon to cover our hosting fees. So please consider chucking a few digital pennies our way by clicking on this link. Thanks!