Rant: Why 3D movies are a total con

James Cameron conquered the world with it. Pixar and DreamWorks are enamoured with it. Steven Spielberg has adopted it as his new plaything. The future of cinema, we are told, is three dazzling dimensions. Why, then, does the idea of a whole new crop of 3D blockbusters elicit a big, flat shrug from audiences?

Because 3D is a gimmick. It died out in the '50s when it was dismissed as a novelty, it jumped the shark in the '80s (literally, in the case of Jaws 3-D) after a succession of ghastly slasher sequels and it'll fade into obscurity in the new millennium too.

Why? Because cinema works just fine in 2D, thank you. The extra dimension might evoke 'oohs' and 'aahs' at first, but it deprives from the fine art of composition - everything has to be in focus and In Your Face. Yes, as a technical achievement, 3D can be impressive. But it's the movies themselves that matter - and that's where the house of cards comes tumbling down.

Some of the worst culprits so far? The Final Destination: people die predictable deaths... in 3D! G-Force: Nicolas Cage is a guinea pig... in 3D! My Bloody Valentine: a killer nails a midget to the ceiling with a pickaxe... in 3D! How did we ever survive without it? Sure, there are other, more distinguished candidates, but movies like Up connected because of story, artistry and character - not because of technical trickery.

And before I'm accused of avoiding the big blue elephant in the room, let's talk Avatar; the alluring floozy that kick-started Hollywood's new obsession. Granted, Pandora was one hell of a vacation spot, but James Cameron spent 14 years and something shy of $300m waiting for technology to catch up to his vision. Who else is likely to devote that much passion to a new project when they can just knock out another Saw sequel in 3D on the cheap? 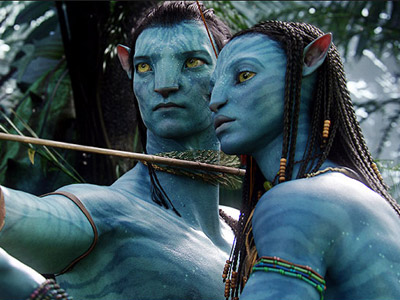 Guess what colour my balls are, baby.

How convenient, too, that cinema's new "game changer" also requires audiences to pay extra for the privilege? After Avatar made 20th Century Fox a dirty great stack of green, thanks in part to higher ticket prices, Warner Bros smelt blood and ordered Clash Of The Titans and the new Harry Potter to be refitted in 3D - in Titans' case, after shooting had already wrapped.

There's no creative reasoning behind that decision, it's purely financial. Starting from this week, 3D tickets for IMAX in the US have been bumped up to $20. Each. Try and bring your own glasses and you'll still have to pay for new ones. Why? Err... we'll get back to you. And for what? Some half-hearted wand-waving and sword-swinging? Good thing Clash is getting some positive write-ups. Oh wait, no it isn't.

Roger Ebert has it right when he says any director worth his salt adding 3D to his movie "would be like a novelist choosing a distracting typeface." The last thing cinema needs right now is for Michael Bay's movies to be even more visually incomprehensible. 3D shouldn't be considered another toy to play with. You won't see people like Paul Thomas Anderson or the Coen brothers using 3D just because.

Chances are, you like me are part of a generation who saw many of their favourite films on a grubby old VHS, tracking lines and all. Yet the memories of those movies can still be recalled in crystal clear detail, correct? Quality shines through, whether you're watching in two, three or five dimensions. 3D is the future of cinema, you say? Balls. The game hasn't changed - it's just now we're the ones being played.

This article originally appeared in TotalFilm.com
More:  3D  Avatar  Clash Of The Titans  Harry Potter
Follow us on Twitter @The_Shiznit for more fun features, film reviews and occasional commentary on what the best type of crisps are.
We are using Patreon to cover our hosting fees. So please consider chucking a few digital pennies our way by clicking on this link. Thanks!