These ex-agents may be suffering from old age, but their shrewd marketing department clearly has its finger on the pulse of today's youth. #ROFL #YOLO #TheseAreAllThingsThatYoungPeopleSay


When Red first introduced the hilarious idea of aging spies coming out of retirement to fight a common enemy, I'm sure I wasn't alone in thinking "It's going to take more than one film to fully explore this concept". And now, as luck would have it, a sequel is on its way promising even more geriantics. Look, here are some posters if you don't believe me: 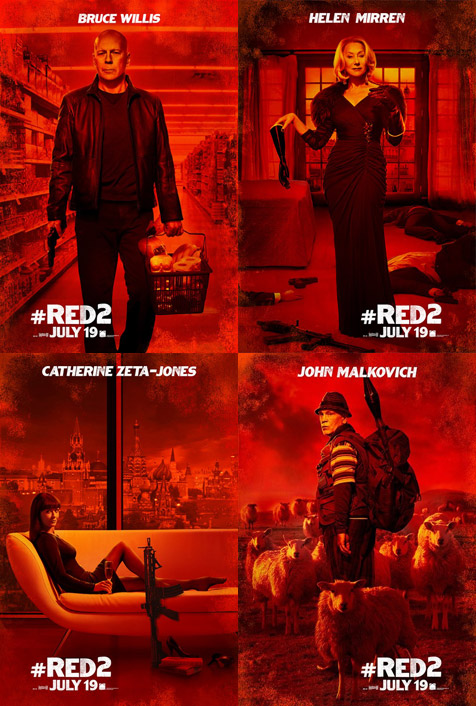 Perhaps even more surprising than Catherine Zeta Jones selling herself short by joining the cast is the posters' genius logo. Take a closer look and see what those clever studio bods have 'tagged' to the start of the movie's title:

That, my friends, is what youngsters call a 'hashtag'. For those, uninitiated in the world of social media, this basically guarantees that everyone on Twitter will now call the film #Red2 instead of just the boring and frankly obsolete Red 2. Soon enough, people won’t be able to move on Twitter without seeing #Red2 filling up their streams like those funny green numbers in The Matrix. What the studio has done here is effectively ensure that #Red2 will go 'vile' and become a 'memm'.

But coming to this final design was no easy process. I spoke to a representative from DC Entertainment who talked me through the previous designs they had before settling on this final, bold and innovative idea.
Facebook like

"This was actually going to be the final logo because our research showed that more people Facebooked than Twittered. We even mocked up posters ready to start distributing but then, at the last moment, we showed it to Bruce Willis who was confused because it wasn't red. He basically made us change it."
Reddit upvote

"This seemed like an obvious choice because Reddit already shares three letters of the film's title [The first three, in case you can’t spot them – Ed]. But no matter how hard we tried, we couldn’t get it to work in the title. Red-2-dit? Redd2t? Redditto? It just didn’t make sense."
LinkedIn spam

"We actually built a whole viral marketing campaign based around LinkedIn because everyone obviously loves to receive those emails. We created a fictitious spy agency as a company and sent emails asking people to join the network. Unfortunately everyone just ignored them all so it went completely unnoticed. Eventually we just kinda forgot to keep the profile updated so we gave up on it."
A fascinating insight into developing a successful logo, I'm sure you'll agree. What's next? VIDEO posters? With clips from the film? And a voiceover? That can play on TV and before other films at the cine- oh.

More:  Red 2  Bruce Willis  Helen Mirren  John Malkovich
Follow us on Twitter @The_Shiznit for more fun features, film reviews and occasional commentary on what the best type of crisps are.
We are using Patreon to cover our hosting fees. So please consider chucking a few digital pennies our way by clicking on this link. Thanks!