Review: The review of my review of I Give It A Year

A new website called Existimatum.com has launched which promises to rate and rank movie reviews - not the movies themselves, but the reviews of the movies. Their tagline is as lofty as their ideals: 'Quis custodiet ipsos custodes?' translates as 'Who watches the watchmen?' Which is hilarious, because the site reads like it was written by a spambot.


Existimatum announced themselves on the scene by spam-replying as many movie industry types as possible on Twitter - me included - highlighting the fact that their work had been put under the microscope. If their goal was to appeal to the ego of the film writer, it worked: frankly the thought of an external regulator validating my writing and ranking me among my peers made me hiccup with giddiness. If nothing else, it might throw some light on a few of the second-rate bloggers and reviewers I took a swing at in my last rant.

It's obvious Existimatum.com is still in its infancy. At present, only four films have been chosen, each with a few dozen film reviews listed and scored - not just with star ratings, but with proper written analysis too. Some of the review reviews have a bigger word count than the reviews they're reviewing. It's all very strange. Critics reacted at first with bemusement. Robbie Collin of The Telegraph assumed the site was satirical in nature. Whoever is editing Existimatum - and I'm imagining a dude in a Rorschach mask sitting at a computer - has a unique way with words and it's not always clear whether he or she is being sarcastic or genuine. It's like staring into a fun-house mirror. 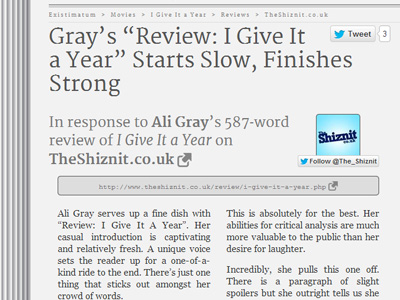 Seriously. Is this a joke? Guys? I get jokes! Haha! Guys?


Anyways, my review of British romcom I Give It A Year had been ranked and rated, and although it wasn't called "A Silky Smooth Read" like Joe Cunningham's review over on HeyUGuys, it seems the review reviewers enjoyed my review. However, I have a few points of contention that I'd like to address, and I figured the best way to do that would be to review the review of my review, which you can read in full here.

The review reviewer also shows a lack of perspicacity early doors by referring to my review as a "crowd of words".

The second of six paragraphs - all displayed in a serif font which is pleasing to the eye - also makes an error by claiming "Gray boldly states that she [he] could not care less about a film's quality as long as it makes her [him] laugh." Not true. In my review, I claim that plot, characters and cast are secondary to how effective the humour is, not the overall quality of the film. Again, Existimatum have misunderstood my intention (and gender).

In the third paragraph of the review of my review (linked at the top of the page to avoid confusion, complete with an icon that makes it clear the user is leaving the page to go to an external site) Existimatum's editor uses superior prose to describe how I don't focus solely on the above point. It continues with a humdinger of a fourth paragraph, the best yet, which expertly cuts to the core of the matter: how my critical analysis shines through despite the alleged problems found in the second paragraph.

Paragraph five of the review of my review is only okay.

The summation of the review of my review is odd, because it claims that my review shows I have a "unique voice" but doesn't specify what's unique about it, and that "that alone means something" but again, doesn't specify what that means. The brief mention of my review not being up to "awards material" is frustratingly vague as to what awards it was in the running for.

Finally, the sign-off "There are many worse reviews out there. There are also many better" is something you say when you've started writing a review of a review and you don't really know what you're doing or why you're doing it and you just need to end it without really committing to a worthwhile opinion.

My Quality Of Writing was given a star rating of 4/5, which I won't contest, while my review was rated 4.5/5 in Reasonableness, a mercurial quality which doesn't always come easily. However, I was docked points for Spoiler Avoidance with a mark of 3.5/5, despite a complete lack of spoilers. I will graciously accept the rating of 4/5 for Presentation.

Overall, Existimatum's review of my review is a frustrating read, not only because the title claims my review "Starts Slow" when the first paragraph lauds my first paragraph as "casual", "captivating" and "relatively fresh", but because the rest of it feels like it was written by either a) someone who thinks they're performing a genuinely useful public service but who has realised halfway through that analysis of analysis is a colossally meaningless undertaking, or b) horse_ebooks. Ali(stair) Gray


I am genuinely hoping to see much more of Existimatum soon.

More:  Review  Existimatum  I Give It A Year  Wait What
Follow us on Twitter @The_Shiznit for more fun features, film reviews and occasional commentary on what the best type of crisps are.
We are using Patreon to cover our hosting fees. So please consider chucking a few digital pennies our way by clicking on this link. Thanks!