Probably for just this one time, we're branching out into restaurant reviews. It's cool though, the 'restaurant' in question was on TV so it's still kind of relevant.


I've lived in London for a good couple of months now - long enough that I no longer care about touristy things and tut at people taking photos or studying Tube maps and generally getting in my way. I even caught myself saying "Angus Steakhouse is just for tourists" the other day.

I do however still get a bit excited when I see something on telly and realise it was filmed close by. I live in Clapham, so you can imagine my joy when I discovered Channel 4's fly-on-the-wall documentary The Fried Chicken Shop: Life in a Day was filmed at Roosters Spot on Clapham High Street.

This offered up a unique opportunity to me – someone who's grown up in the countryside and needed a car just to get a pint of milk. I could actually get somewhere I've seen on the telly within ten minutes of leaving my front door. You can probably see where this is going. Any excuse for chicken, huh? 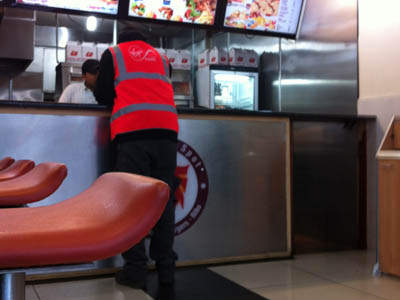 This guy wanted his wings "not too spicy bruv".

This past Saturday, then, I decided to indulge in lunch at Clapham's favourite fast food restaurant that isn't McDonalds, Greggs, or KFC. I wanted some of the 'magic' that was conveyed to me on TV. I wanted to bump into Rayon and Reece arguing over headgear, exclaiming: "You've got a fucking ginormous head bruv! Your head is huuuge."

I was one of only three customers. One did have a spectacular beard and a scruffy suitcase while another was being very specific about the spiciness of his wings, but nothing you’d really call 'TV friendly'. Granted, I perhaps would have had better results had I stumbled in there at 1 in the morning after a night out, but this was an experience I wanted to savour so 1 o'clock on a Saturday had to do.

Having come highly recommended by a drunken patron on the show, I opted for the chicken wrap meal, hoping it'd be like a KFC Twister. It was, and a damn sight cheaper too: £4 with a can of Pepsi and generous serving of chips can't be sniffed at. 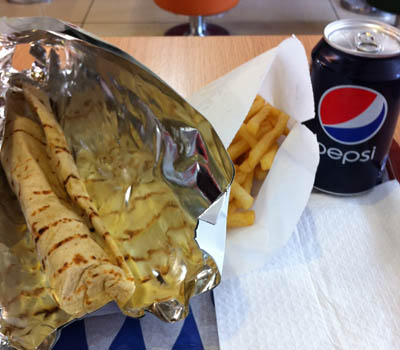 Note: wasn't as spicy as the show had led me to believe.

I took my time eating my delicious wrap, hoping one of the 'stars’ of the show would wander in. They didn't. It was annoyingly quiet to be honest. It was as if my telly had lied to me. I was expecting the place to be teeming with fans of the show, all hoping to get their chicken on, desperate to bump into one of the regulars. But no, just a few people popping in for a crafty wing, giving precisely zero shits their favourite fried chicken shop had been on TV.

So, with mixed emotions; disappointed by the lack of the support the place had but at the same time very happy with my meal, I put my rubbish in the bin, nodded my appreciation to the guy behind the counter (who wasn't on the show), pulled on my coat and left. I stunk of chicken for the rest of the day. But I live in hope Channel 4 make a documentary set in a kebab shop in Balham.

More:  The Fried Chicken Shop Life In A Day  Random  Channel 4
Follow us on Twitter @The_Shiznit for more fun features, film reviews and occasional commentary on what the best type of crisps are.
We are using Patreon to cover our hosting fees. So please consider chucking a few digital pennies our way by clicking on this link. Thanks!