Geeks across the globe reconvened in San Diego this weekend for their annual meeting of dressing up and playing with toys and arguing over which superpower is the awesomest. Haha NERDS. Anyway, here's a round-up of all the super-cool and important film and TV stuff that happened.


Shortly after releasing the first trailer for Aquaman, DC announced that a remake is underway.

A cosplayer turned up in a fully functional Transformer costume that was so good Paramount Pictures subsequently cancelled all promotion of Bumblebee over the weekend and is now "reconsidering" the release of the film.

At various points over the weekend, Idris Elba, Jake Gyllenhaal, Chris Pine, Kit Harrington, Tom Hiddleston and James Corden were all announced as the star of the new Crow reboot.

Following the firing of James Gunn, Marvel announced that the new director of Guardians Of The Galaxy 3 will be Roman Polanski because "we checked and thankfully he’s never been on Twitter".

14 new movies about the Joker have been announced. Three of them are shooting from the same script.

Jeremy Renner turned up in his full Hawkeye costume, but no one noticed. 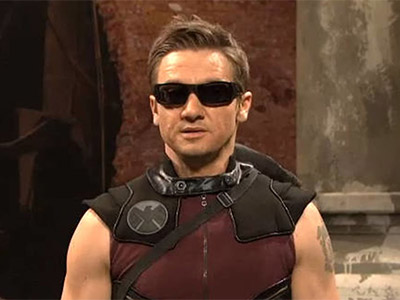 There were no pictures, so here's some other Hawkeye cosplayer instead.


Marvel announced that the official title for Avengers 4 is Avengers: Here We Go Again.

The cast of Downton Abbey turned up to do a Q&A about the newly announced movie, but they just looked visibly confused for a bit and went home again.

A trailer for a new JJ Abrams-produced film was shown, called This is Definitely Not A New Cloverfield Film, and because of the Abrams connection, some are speculating that it might actually be a new Cloverfield film.

A brand new trailer was released for 2012’s Ghost Rider: Spirit Of Vengeance, prompting some people in the crowd to suggest that it was better than the original trailer and they "probably would have gone to see the film" had this one been released.

New trailers for both Godzilla: King Of The Monsters and The Walking Dead: Season 9 were shown and they turned out to be the same trailer, revealing a previously unknown crossover event.

Following other superhero prequel shows like Gotham and Krypton, a new TV show Web was announced, following the adventures of the spider that bit Peter Parker before it became radioactive.

Fans of the upcoming Venom were treated to a new Comic-Con-exclusive clip from the film, which just showed Tom Hardy wearing a black Spider-Man costume and doing funny voices to himself in the mirror. 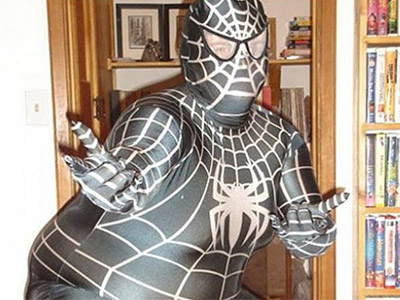 
Bruce Willis turned up to field questions about Shyamalan’s Unbreakable sequel Glass, but he would only answer when addressed as 'Bruno' and refused to answer any question that wasn’t about his music career.

Game Of Thrones is being rebooted ahead of the last season coming to TV. It will be a "shot-for-shot remake of the original show" with all of the original cast reprising their characters.

A Babylon 5 reunion event took place only after someone realised that all the cast were there individually just for fun.

The new Doctor Who trailer was met with stunned silence after it became apparent that the BBC has digitally erased all boobs from the show so as not to upset anyone.


All caught up? Great. Haha NERDS!

More:  Comic-Con  Marvel  DC  Batman
Follow us on Twitter @The_Shiznit for more fun features, film reviews and occasional commentary on what the best type of crisps are.
We are using Patreon to cover our hosting fees. So please consider chucking a few digital pennies our way by clicking on this link. Thanks!