Seven things that should happen in House season eight

House season eight starts Thursday night, 10pm, Sky 1. It's looking like it'll be the last season, so what needs to happen? What loose ends need to be tied up? Ask us: we've been watching it ever since everyone was like "OMFG that's Hugh Laurie! He's being an American, for crying out loud!"


Arguably I care about what they do with House a bit too much. But it's been my favourite show ever since I caught the first season on Channel 5. I'm emotionally invested. If the following seven things don't happen, I'll ... I'll ... well, probably just buy the Blu-ray boxset, to be honest. But I won't mean it when I do.
1. He should stay in prison for a bit

We all know by now he's starting the season in jail for the whole car-through-wall thing. I presume he'll be there for one episode, like when he was in the psychiatric hospital, then out again and back at the hospital in time for episode 2. Otherwise there's no show, right?

See, I don't think so. We've long ago reached a stage where House the character is the most important thing. We'd follow what he did whether he practised medicine or not. Leave him in chokey for a few episodes, I say, or let him out but don't go back to the hospital for a bit. See what happens. It'd be risky but interesting to watch.

Mind you, this is largely academic given that they've already shot the first few episodes and they know how long he'll be in there. Wait, why am I bothering with this again?
2. Stephen Fry should be in it

Somewhere. Just briefly. Doesn't even have to be any longer than his cameo in A Fish Called Wanda - he just needs to pop up, call House "m'colleague" and sod off out of it.

3. Foreman should just fuck off

Why doesn't the bloke do something or get another job? Why doesn't he get caught stealing a car or something, proving House was right all along? Ever since he developed the whole 'bored with all your shit' attitude towards House (ie about THREE SEASONS AGO) he's been dull. Up your game, mate.

If he's not careful, people will stop making fanvids of him set to Taylor Swift songs altogether.
4. The ghost of Kutner should come back

This would be awesome. Why have there never been more ghosts in House? Like, not a hallucination: an actual ghost. In fact, why aren't there ghosts in more shows in general? You know, like Match of the Day 2. Or Crimewatch. 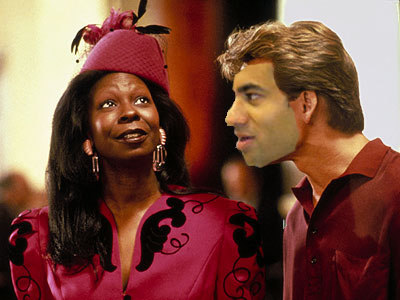 "Scuse me, did you see a doctor around here somewhere? Unshaven, walks with a cane? HELLO?"
5. Cameron shouldn't

Besides, she's doing this now. Uh, no, Cameron, you're OK, just stay there. What you're doing looks ... great? Yep. No, we'll call you!
6. They should address the fact that Chase was Billy Kennedy in Neighbours

Sorry, but it's been an elephant in the room for seven years now. Everyone knows it, and no one says it. At some point this season when Chase comes up with some shitheel theory, like it's lupus or something, House should just say, "Yeah, fuck off back to Yabby Creek and take your diagnosis with you, Bouncer!"

They could maybe punch up the dialogue a bit, obviously.

Not to mention the fact that he's a WIFE-BEATER.
7. This should happen in the final episode

You'd presume there's got to be some big emotional breakdown scene where he finally admits how much he hates himself, that being right all the time isn't enough and he just wants to be loved or whatever. This is fine. You know that's coming at some point. But the key thing is that he should not be happy when it all ends. Any kind of happy, hey-he-just-needed-to-find-the-right-girl resolution for the character would ignore his complexity.

So the final episode should be this. Wilson gets some kind of disease. House can't figure it out in time to save him and Wilson dies. Then House hates himself more than ever and can't go on without his only friend, so he knocks back a good fifty vicodin and drifts off peacefully. Yes, I have basically just written House fan fiction. Deal with it.

They're welcome to this storyline. I still haven't heard back from the producers of Bob the Builder so I'm guessing they don't want it.

More:  House  Hugh Laurie  Jennifer Morrison  Jesse Spencer  Omar Epps  Top 10
Follow us on Twitter @The_Shiznit for more fun features, film reviews and occasional commentary on what the best type of crisps are.
We are using Patreon to cover our hosting fees. So please consider chucking a few digital pennies our way by clicking on this link. Thanks!