Should actors be forced to watch their own movies?

Hey Mr Actor-person, sir. If you're willing to take a huge vat of money in exchange for two hours' work, at least put the effort in to watch the results afterwards. What's that? No, you can't charge overtime for it.


I've always found it interesting when actors say they can't watch themselves onscreen. Here I am photobombing every photo taken within 50ft of me and yet these people - nay, these celebs - find their own acting too embarrassing to sit through.

And yet there has been a recent epidemic of smug shrugging in Hollywood that goes far beyond simple modesty. Because, even if you respect the apologetic honesty with which some actors confess they did a piece-of-shit movie purely for the money, it's particularly aggravating if they admit they haven't even bothered to watch it afterwards.

In a recent insightful interview with Collider, Hugo Weaving denounced his involvement in the Transfomers franchise as being "meaningless" to him. And not only has he not watched the films, he never saw a script and has never even met Michael Bay. Here is his long comment/apology/confession in full:

"
"
"That's a weird job for me because it honestly was a two-hour voice job, initially. I was doing a play and I actually didn't have time, anyway. It was one of the only things I've ever done where I had no knowledge of it, I didn't care about it, I didn't think about it. They wanted me to do it. In one way, I regret that bit. I don't regret doing it, but I very rarely do something if it's meaningless. It was meaningless to me, honestly.

"I don't mean that in any nasty way. I did it. It was a two-hour voice job, while I was doing other things. Of course, it's a massive film that's made masses of money. I just happened to be the voice of one of the iconic villainous characters. But, my link to that and to Michael Bay is so minimal. I have never met him. I was never on set. I've seen his face on Skype. I know nothing about him, really.

"I just went in and did it. I never read the script. I just have my lines, and I don't know what they mean. That sounds absolutely pathetic! I've never done anything like that, in my life. It's hard to say any more about it than that, really."
Let's just read that one bit again: 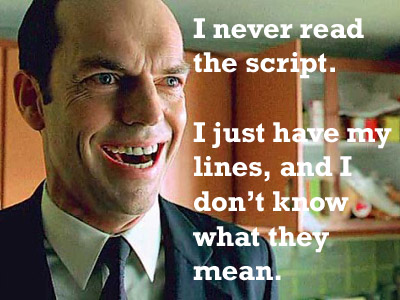 Frankly, it's baffling to me that there even exists a filmmaking process in which an actor can have a huge part in a film without caring one jot about the starting script or the end product. But, just to be clear, that's Hugo Weaving regretting his decision to appear in the Transformers movies... three times. That's three times he read lines for a film he knew nothing about. He might seem doubtful about his decision now, but it's not as though he didn't have plenty of chances to raise a hand and question it at some point over the four-year period it took to make these films.

And then there's Paul Bettany, who last week had this to say about his role as Tony Stark's compu-butler Jarvis:

"
"
I feel like a pirate. This is robbery. I walk in, I say some lines on a piece of paper for two hours, and then they give me a bag of money and I leave and I go about my day. I sort of feel guilty, because at least acting can be exhausting, with long hours… but I do nothing! And I've never seen one of them. 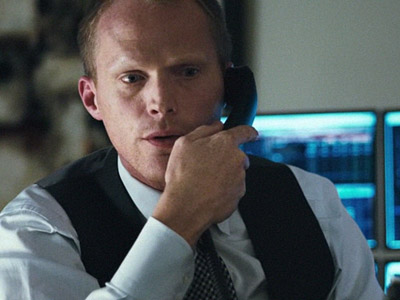 
Presumably, by extension, this means that Bettany has also never watched Avengers Assemble, the third highest grossing movie of all time - making him practically the only person left in the world who hasn't seen it. Even if these films are not "his thing", as Bettany later states in that same interview, they are generally considered to be pretty good, they have heralded in a new era of comic-book films and he is in them. What, he can't spare two hours at a time to check out the most successful films on his CV?

And it's not even voiceover work that actors are brushing aside. In another interview published last week, Bond-botherer Judi Dench was asked about her role in Clint Eastwood's bore-opic, J. Edgar:

"
"
"What's it like? I suppose I should see it."
I'm not going to lie, Dame Judi - it's not good. Maybe if you made more of an effort to watch your own films, you'd develop a better sense of what jobs to turn down.

Who knows what films are currently being released that won't be watched by their own stars? What's the bet that, in a year or two, Ben Affleck will admit "Yeah, I never watched Argo. I know I was supposed to after directing it and starring in it and everything, but... it just seemed too long"?

More:  Hugo Weaving  Paul Bettany  Judi Dench  Serious Corner
Follow us on Twitter @The_Shiznit for more fun features, film reviews and occasional commentary on what the best type of crisps are.
We are using Patreon to cover our hosting fees. So please consider chucking a few digital pennies our way by clicking on this link. Thanks!