How long must you wait before revealing a spoiler? If you're Alan Sugar, the answer is RAH RAH I'M BLADDY ALAN SUGAR I COULD BUY YOU IF I WANT, but if you're a mere human being, there are rules that must be obeyed. Warning: this article contains spoilers. No, really.


Something called 'The Apprentice' starts on something called 'TV' soon, so the East End's favourite son Alan Sugar decided to guest-edit the Radio Times – they didn't invite him to, he just barged into the office, sat in the editor's chair and said, "This is shit, change it." Then Nick Hewer looked at the existing editor and she exploded in a cloud of dust and vapours.

Anyway, every section of the magazine gives Sugar the chance to stick his bearded oar in, including the Film section, where Alan lists his favourite movies and why. So, media magnate Alan Sugar: why do you like Ron Howard's A Beautiful Mind so much? 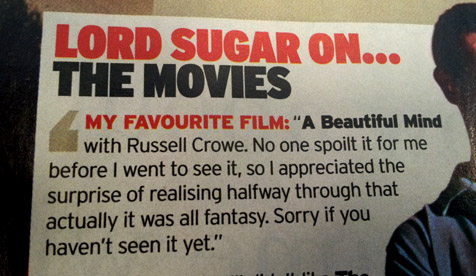 This is quintessential Sugar: a brazen middle-finger, chucked to any readers who might have made the mistake of thinking Sir Alan gives a tuppenny shit about the things you love. I adore the casual, offhand way he discloses the entire crux of the movie, then half-heartedly apologises to the Radio Times' readers, despite revealing it was precisely his lack of said information that made the film such a joy. He might as well have wiped his bum on the magazine. For all we know, he did. He guest-edited it.

I tweeted the above picture, thinking it was hilarious for the manner in which he casually ruins the film, only for people to reply to me saying I'd just ruined A Beautiful Mind for them. Damn you, Sugar! Your asshattery is infectious! Fair enough, I'd made much the same mistake as he had – albeit on a much smaller scale, and with much less facial hair – but the touchy issue of spoilers is clearly still a hot-button issue for some.
What we need is a hard and fast set of spoiler rules so we're all on the same page. Here's what I'm proposing:

There should be a 10-year period after a film's release, during which it is improper to reveal a spoiler unprompted. Once that period has expired, fans can rightly claim that any offended party has had a decade to catch up and has no right to be upset.

If a spoiler is uttered during those 10 years, the offended party can legally kill the spoiler with hammers. The offended party may wish to spoil something significant in the spoiler's life in retaliation, like the results of an AIDS test. This may not always be possible.

During the embargo, those desperate to talk about spoilers in films may do so, but only within signposted, quarantined safe zones. If any offended party reads a spoiler divulged under these circumstances, they are giant idiot babies and you may mock them.
That's pretty watertight, right? 10 years seems like a pretty fair amount of time to sit on a spoiler. I'm not suggesting we all hold spoiler reveal parties for the 10-year anniversary of Saw in 2014 or anything, but if there are still people getting upset over the fact you revealed that Bruce Willis is a ghost in The Sixth Sense today, you need foundation for your argument. A Beautiful Mind was released in 2001, so as much as I dislike the idea, Sir Alan Sugar can say whatever the hell he wants. 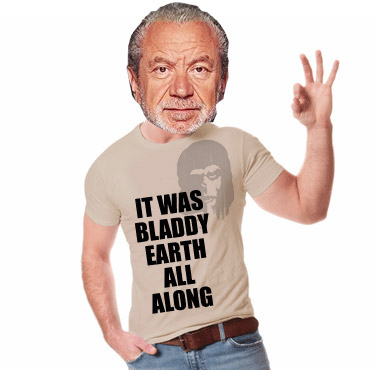 
And if you don't believe that there are still people getting their panties in a twist over hearing the secret of The Crying Game or getting angry that you accidentally assumed they knew that Kevin Spacey was Keyser Soze, then heed this cautionary tale. My brother once struck up a conversation with his wife about King Kong, only to find she was appalled that he'd ruined it for her by divulging that Kong falls off the Empire State Building at the end. A spoiler that was well-known before World War II had even started.

Be warned. These people are out there. Stick to the rules. Remember the motto: "If 10 years hath passed, I may spoil your ass."

More:  A Beautiful Mind  Radio Times  Ron Howard  Alan Sugar  Top10
Follow us on Twitter @The_Shiznit for more fun features, film reviews and occasional commentary on what the best type of crisps are.
We are using Patreon to cover our hosting fees. So please consider chucking a few digital pennies our way by clicking on this link. Thanks!