Spider-Man's cast list grows; would you just cast him already?

Last week, the internet was absolutely certain that Billy Elliot was going to be cast as the new Spider-Man. Now, it's saying Kick-Ass and Chekov are in the running, too. Damn you internet, make up your mind!

I am an impatient man. I once kicked a hole in my bedroom ceiling because I had to wait for my brother to finish his go on the computer. I come close to putting my fist through my work monitor every time that little spinning wheel starts laughing at me. I tire of football 'transfer sagas' before they've even begun. I'm not much fun at surprise parties, either.

And I hate, hate movies that cycle through an entire warehouse of hopefuls before deciding on the most bland, generic actor for the role. It's the very definition of tedium. And my impatient-sense is tingling with Sony's new Spider-Man reboot, due in 2012.

I get it, it's a prestigious role for any young actor, and the studio has to get it right. But in the few months since the project has been announced, around a dozen or so young actors have officially been "in the frame", stretching the very definition of the phrase 'short list'. 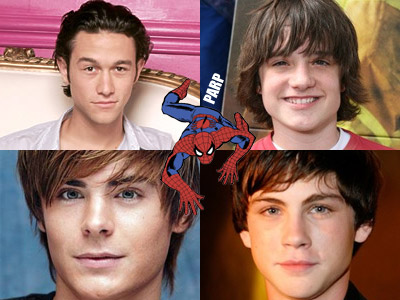 First we were told Joseph Gordon-Levitt was a shoe-in, even though he's 30 next year. Then The Sun made up a story about Zac Efron, because they're idiots. Next, we were told Percy Jackson actor Logan Lerman had the role "locked". Then we were assured the field had been narrowed down to five young actors, including Josh Hutcherson and Andrew Garfield. My suggestion of growing a Culkin foetus to order was roundly ignored.

This week, there's been some new activity at least, but we're going round in circles - Spider-Man is getting caught in his own web. Jamie Bell was said to be the front-runner, and some sites even claimed he had been cast. Fine. Get on with it. I can make peace with a dancing Northern fairy playing the coolest superhero ever who isn't Batman. I'm a tolerant chap, if a little impatient. Now give me my damn Spider-Man movie.

But today? Damn you, today. The LA Times are claiming there are two new boys on the casting couch: Kick-Ass's Aaron Johnson and Star Trek's Anton Yelchin. All fine actors, but Lord, give me strength. If there was a way to put all of these guys into a blender and mush them into one person, I'd happily hit 'frappe'. Of course, it could be done, but I'm not sure they'd agree to get in, so we'd be back to square one.

Of course, all of this is moot, because really, no one gives a shit who plays Peter Parker, just like no one really gives a shit that this new movie is a reboot. The film is called Spider-Man, not Peter Parker's Zany Schooldays. Just find a fresh-faced youngster who can dress down as a nerd, flip off some trite one-liners and who looks good in spandex. And make sure he's old enough so it doesn't sound weird when you ask him to wear spandex.

I hope I'm not alone in thinking most Hollywood actors under 25 are pretty much interchangeable, with few exceptions. Their faces look like the generic base models for creating a customisable character in videogames, and you just know there are studios out there who wish casting their movie was that easy. "Can we make his jaw wider? Raise those eyebrows a little. Decrease the Hispanics by 12%. Guys, we've got our Peter Parker!"

In short? Just hire Jamie Bell and get the fuck on with it. And someone tell Barcelona to hurry up and buy Fabregas.

More:  Spider-Man  Jamie Bell  Anton Yelchin  Aaron Johnson
Follow us on Twitter @The_Shiznit for more fun features, film reviews and occasional commentary on what the best type of crisps are.
We are using Patreon to cover our hosting fees. So please consider chucking a few digital pennies our way by clicking on this link. Thanks!