Suicide Squad, DC and the Warner Bros war against coherence

It should be abundantly clear now to anyone with even a passing interest in superhero movies that the concept of the "shared universe" should be feared. Credit to Marvel: they took a big risk, did their groundwork and built up their shared universe by releasing not one but four successful individual franchises, before bringing them together like a corporate executive doing an overbite and interlocking his fingers in the universal sign language for 'synergy'. Everyone else saw The Avengers' box-office success and thought, 'Yeah, we'll have a bit of that. But sod all that hard work!' And thus, the very blueprint for superhero movies was torn up, sellotaped back together and plonked on the desks of finance departments throughout Hollywood.


This weekend, I watched two thirds of the DC Cinematic Universe. Unlike most critics, I was actually a fan of Man Of Steel: Zack Snyder managed to make an exciting and visceral movie featuring one of the most boring heroes in the history of comic-books. (It might help that I purposely avoided all pre-release marketing). It is clear to me now, having watched Suicide Squad and Batman V Superman: Dawn Of Justice over 72 hours (not actual running time) that the best movie in the DC Cinematic Universe didn't even know it was in a shared universe at all. Famously, Man Of Steel was scripted, shot and halfway through production when The Avengers broke the bank. No cameos. No postscripts. No random characters literally appearing out of nowhere in red metal suits to spout gibberish in an angry cloud. Everything else that has followed has been a panicked reaction to someone else's success, but Man Of Steel was essentially a standalone movie; a flawed movie, but one with a beginning, middle and end. What a luxury that feels like now.

Suicide Squad, as I'm sure you're all well aware, performed a similar trick to Batman V Superman this weekend, managing to break the August opening weekend record while enraging critics around the world (the Rotten Tomatoes consensus currently stands at 25%). Never has it been more obvious that a movie's marketing is now considered more important than the movie itself. Cut a few awesome trailers to Bohemian Rhapsody and you'll have fans lining up round the block, prepared to firebomb the offices of a reviews aggregator to defend a movie they haven't even seen. The problem is, trailers are supposed to be a series of unconnected scenes set to cool music - but that description shouldn't also apply to the feature itself. How telling is it that Warner Bros reportedly brought in the same company that cut Suicide Squad's trailers to try and fix the edit of the finished film? "Make it more like our marketing" just became an acceptable studio note, and that should terrify you. 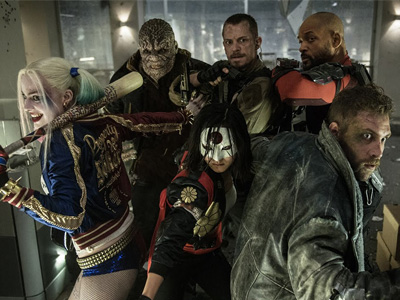 
Who knows who to blame for Suicide Squad's abject failure to perform even the most basic tasks asked of a movie? Director David Ayer said the version you see in cinemas is his cut, but he speaks with the credulity of a man being held at gunpoint. It doesn't matter who stuck the fatal knife of Suicide Squad's death by a thousand cuts: the finished film, which thousands of people have put their name to, is borderline unwatchable. It is an assault on the basic principles of cinema: that movies are supposed to have plots that are communicated to audiences, and that characters should have defined goals. It succeeds in its goal to open up the DCCU to all manner of shady criminals. It shoehorns in The Joker. Ben Affleck's Batman is there, fulfilling his contractual obligation. All very exciting. Except by God, Suicide Squad is one of the most incoherent, butchered stories I've seen on screen in a long time.

Here's an example of the scars on the screenplay, which, by the way, was written in six weeks and then shot on the hoof. The movie starts with Amanda Waller putting together Task Force X, a motley crew of expendable criminals. Why? Some nonsense about a response to the threat of "the next Superman" being a terrorist (never mind that of the eight members of the Suicide Squad, only one is actually a 'meta-human', and one of them is called 'Captain Boomerang'). Using in-movie logic, the only real reason for the squad to exist is to fix a problem of its own making, when team member Enchantress goes rogue. She's the movie's villain, by the way, who boasts of creating a "machine" (never explained) to teach humans a lesson (later described as a "swirling circle of trash", we are never told exactly what this light show is or why it's dangerous). If memory serves, we also get two scenes of Enchantress leaving the squad in different ways, one of which is repeated twice. 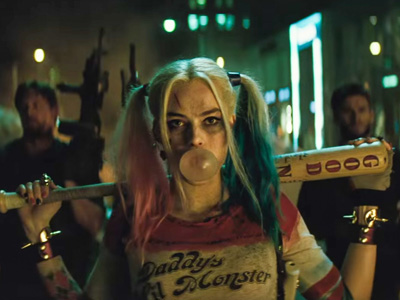 There is, however, a scene in which Margot Robbie gets dressed.


And then there's the Joker. Ha indeed! If Heath Ledger's Joker was said to cut through The Dark Knight like the shark in Jaws, Jared Leto flaps through Suicide Squad like the seal in Andre. There is no prefix to the word '-tagonist' that adequately describes his role here. He's not a proper villain, having almost no effect on the A-plot of the movie, but it's far from an extended cameo: he's on literally all the marketing! I get it, he's an agent of chaos! So damaged, very twisted! No mere narrative through-line for the Clown Prince of Crime! It is clear that he played a much larger, more consequential role in an earlier version; at some point in the editing room, David Ayer - or whoever was working on that week's cut of the movie - blatantly thought 'Fuck it: as long as he's in the movie in some form, it doesn't matter'. The Joker is not a character in this movie. He is a 3D recreation of images that Warner suits realised they wanted to put in the marketing. Used properly, Leto could have been Suicide Squad's sole redeeming feature. As it is, he's a trailer to a movie which doesn't currently exist.

Suicide Squad left a sour taste in my mouth so I figured I'd try to wash it away with a viewing of Batman V Superman, which was actually more like biting off my tongue. The version I watched was the standard, much maligned, decidedly non-Ultimate 142 minute edition i.e. the version that everyone ragged on for being - you guessed it - incoherent and incomprehensible. For what it's worth, I didn't find BvS quite as objectionable as Suicide Squad, but it suffers from the exact same problems: huge, tanker-sized holes in the story, massive logic leaps and characters who randomly go awol during important scenes. Amy Adams literally spends the entire last act throwing a spear in some water, then realising that actually, she quite needs the spear, then trying and failing to get the spear back. If this was a mission in a videogame, you'd sack it off and watch a movie instead.

These story problems, I'm told, are fixed in the Ultimate Edition, which adds 30 hot minutes of sexy expository bonus footage. Who signed off on this business model? Did I miss the meeting where consumers all agreed that actually, we're totally cool with this? Studios should uphold themselves to one law and one law only: the version of the movie they release in the cinema, which people pay the most money for, should be the definitive version of that movie. This isn't the videogame industry, where you can ship games unfinished and patch them on day one. This is a form of punishment for eager cinemagoers who desperately want to see the movie they've been defending online for the past few months on the biggest screen possible. You don't get to do a Director's Cut unless you're Ridley Scott or Terry Gilliam or Michael Cimino, or you're fighting decades of wrong by releasing your movie as it was originally meant to be seen. Preferably not 16 weeks after its theatrical run. 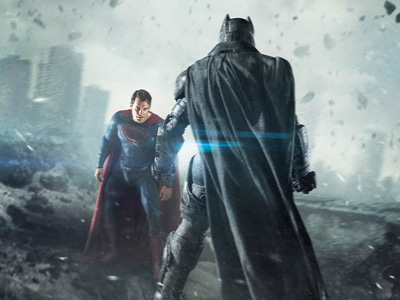 
Mark my words: Suicide Squad will get the same Extended Edition treatment, reinstating extra footage that might have originally explained little things like why characters are going where they're going and why they're doing what they're doing. This trick is a tacit admission that story doesn't matter in the DC Cinematic Universe: it can be fixed in post-post. The marketing now sets the agenda, the movie follows suit, and the home entertainment release fills in the holes: that appears to be the DC model. Fuck you if you can't follow their movies: they're not for critics, they're for fans - but only the fans who pay twice to watch the studio clumsily fix their own mistakes.

More:  Suicide Squad  Batman V Superman  Batman  Superman  DC  David Ayer  Some Bullshit
Follow us on Twitter @The_Shiznit for more fun features, film reviews and occasional commentary on what the best type of crisps are.
We are using Patreon to cover our hosting fees. So please consider chucking a few digital pennies our way by clicking on this link. Thanks!