Quentin Tarantino has been flapping his lip about returning to finally finish what he started with Kill Bill. Can the man not write a full movie from start to finish?

Ever since Tarantino apologetically sliced Kill Bill into two movies, he's been talking up their reunion in a DVD spectacular called The Whole Bloody Affair - both Vol. 1 and Vol. 2 spliced together. You'd think it'd be a simple matter of Ctrl+A, Ctrl+C, Ctrl+V, but apparently not: there's a-tinkerin' to be done.

"I'm not going to monkey around with the movie itself, but we've actually done a whole new section for the anime as the last thing [we added]. I actually wrote a much longer script for the anime section during O-Ren's revenge chapter. Remember the guy with the long hair that kills her father? It's like, what happened to that dude? Well, I wrote it and it was the biggest, most elaborate thing I wrote - her taking him down." 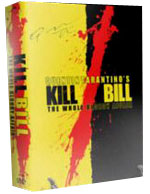 This says everything about what terrible self-control Quentin Tarantino has - he's his own worst nightmare. The man simply doesn't know when to put his pen down. Some people are just in love with their sounds of their own voice; Tarantino has a hard-on for his own words.

It started with Kill Bill, his total lack of self-censure making the movie over-long and over-talkative - did we really need that Superman analogy in the final act? Then came Grindhouse, which spiralled into a four hour marathon and promptly died on its arse at the box-office, leading to separate (and extended) releases for both Robert Rodriguez's Planet Terror and Tarantino's Death Proof.

Hell, even his CSI episode ran long; producers had no choice but to let him write a double episode. And he filled that with Grissom telling long-winded anecdotes about Roy Rodgers and Tony Curtis' non-sequitors.

Now not only is he talking up an Inglourious Basterds prequel - surprise surprise, he simply didn't have enough reel to shoot everything he wanted to - but he's talking about going back to an old project to make a few finishing touches? George Lucas, anyone?

The frustrating thing is, Death Proof excepted, I love Tarantino's films and I'll probably buy the Kill Bill special edition - I sold my individual DVDs of both movies when I learned about The Whole Bloody Affair: four years ago. The prospect of a Basterds origin movie sounds great too, but only because the first film was so lacking in that department. I am helplessly, hopelessly devoted to the man, but I'm finding his lack of self-control a little too transparent of late.

Anyone with me on this one?

More:  Quentin Tarantino  Kill Bill
Follow us on Twitter @The_Shiznit for more fun features, film reviews and occasional commentary on what the best type of crisps are.
We are using Patreon to cover our hosting fees. So please consider chucking a few digital pennies our way by clicking on this link. Thanks!