Ten things I learned from the annual Oscar nominee photo

It's my favourite time of year: the day when all 1,084 Oscar nominees gather together for their annual photo, then rush the all you can eat buffet in an attempt to get the best chicken nuggets from the dinner lady. Meryl Streep has become exceedingly efficient at it.


One of my favourite things about the Academy Awards is the sheer volume of famous people in one room at the one time: the concentrated star power in the Kodak Theatre on Oscar night could charge an iPad for, like, two hours. The annual nominees luncheon photo is always a fun occasion; possibly the only time the guy who was co-nominated for best sound editing could ever share a hemisphere with George Clooney. Here's the pic.


Here are ten things I've discovered from gazing endlessly at this picture. See if you can spot the bonus Jon Favreau lookalike, too.


1. This is almost certainly not an accident 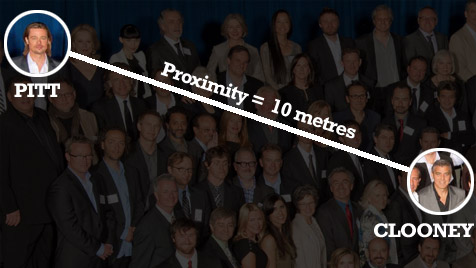 Notice that notorious bum-chums Brad Pitt and George Clooney are not seated next to each other. There is absolutely no chance that this was their choice. Any good school photographer knows, you don't seat the two biggest pranksters next to each other in the annual photo, unless you want unwanted middle fingers, belming or cocks viewed through open flies. "Hur, hur... MoneyBALLS, right George?" Yeah, to the back row with you, Pitt.
2. These two assholes will never amount to anything 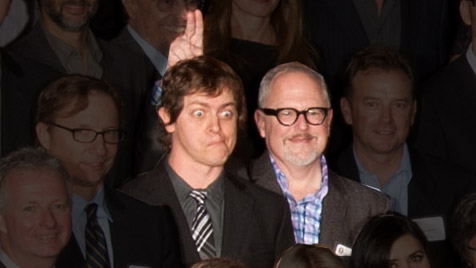 Fuck you, you guys. You think bunny ears are funny? You think pulling a stupid face at the annual Oscar luncheon is endearing? I've got news for you, Brandon Oldenberg and William Joyce, creators of so-called Oscar-nominated short film The Fantastic Flying Books of Mr. Morris Lessmore: Meryl Streep HATES you guys. She told us so. Clooney is SO over you. You're out on your asses. You'll never amount to anything in this town.
3. This guy. This fucking guy 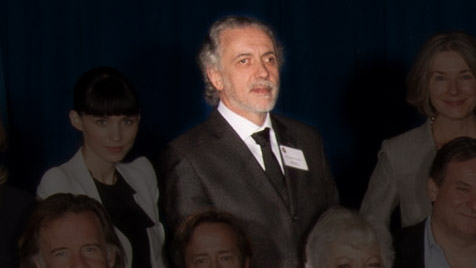 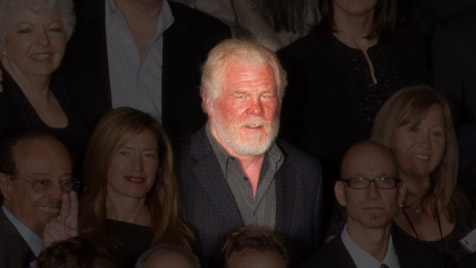 I fail to believe that Nick Nolte, Oscar-nominated for his incredible supporting role in Warrior, is rocking this Arctic face-fuzz for comfort reasons. I'm predicting either a Lifetime Christmas movie is in the works, or he's back on the meth again.
5. The camera guy from True Lies is going places 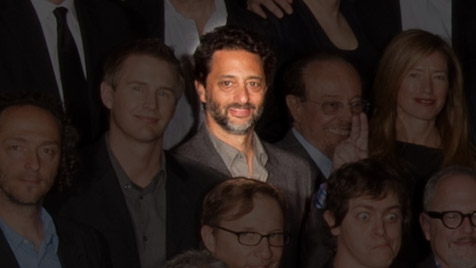 Imagine my surprise when I spotted Faisal, the special agent/camera operator from True Lies, tucked away in the Oscar luncheon photo behind those two assholes playing silly buggers. Imagine my further surprise when I discovered that said True Lies camera operator was Grant Heslov, writer of The Ides Of March and three-time Oscar-nominee. Richard from Congo finally came good! Six years ago!
6. These three guys are having a sex-off 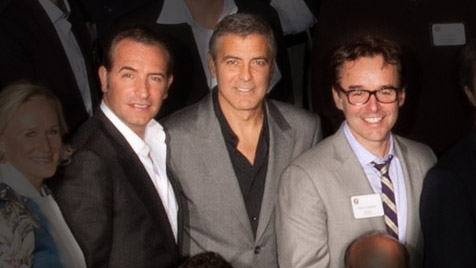 Obviously Clooney strode into the room as cock of the walk, but he has serious competition from Jean Dujardin, who has mastered the raised eyebrow after months of training from Dwayne Johnson. Unbeknowst to him, director/producer Chris Columbus has been dragged into a 'hottest male' competition and damn near walks away with it with his laid back, 'Harry Potter goes to prep school' style. A three-way draw.
7. Michelle Williams is literally an elf 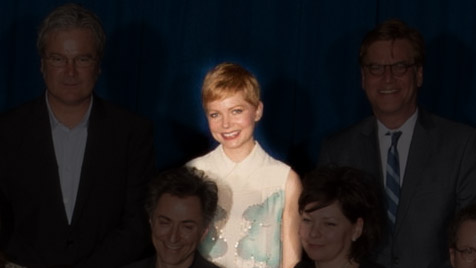 I'm not sure if it's just down to Gore Verbinki and Aaron Sorkin being huge specimens of men, but Michelle Williams looks like being an amazing actress when she finally grows into a human-sized adult.
8. This lady wore the wrong dress 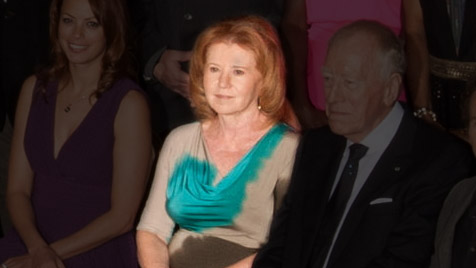 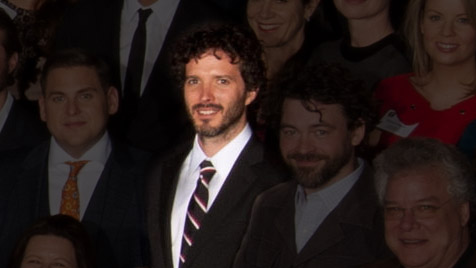 I already knew Bret McKenzie of Flight Of The Conchords fame had been nominated for an Oscar due to his fine work on The Muppets soundtrack, but sometimes it's just nice to be reminded by seeing him rubbing shoulders with the great and good. And Jonah Hill.
10. What's Dean got to do, got to do with it? 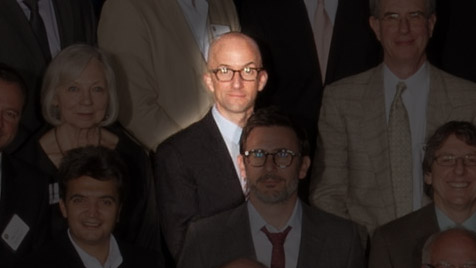 So, the rumours were true: Community's Dean Pelton aka Jim Rash really DID co-write The Descendants. The fact he didn't turn up to this event wearing full-on Carmen Miranda/Rio carnival costume makes us think that TV has been lying to us all this time.

Thanks to Deadline.com for the photo and place names.
More:  Oscars
Follow us on Twitter @The_Shiznit for more fun features, film reviews and occasional commentary on what the best type of crisps are.
We are using Patreon to cover our hosting fees. So please consider chucking a few digital pennies our way by clicking on this link. Thanks!