I love Demolition Man dearly, despite it quite probably being Not A Very Good film. It's as lovable as it is laughable, and has the unique characteristic of being dated on two levels – in both its 'present day' scenes in 1996 and its futuristic setting of 2032. In the oeuvre of Sly, however – and yes, I did just use the word 'oeuvre' in relation to Sylvester Stallone – it represents the end of an era; a time before the action movie became completely self-aware. Truly Demolition Man is the last hurrah for the so-called 'high-octane' one man army action movies of the mid-nineties, and it goes out with a bang, not a whimper.


Literally. If I remember correctly from the Sky Movies special I watched back in 1993, Demolition Man kicks off with one of the largest controlled explosions ever committed to film. Sylvester Stallone's character, John Spartan, is nicknamed the 'Demolition Man' due to his knack of accidentally (on purpose) blowing shit up to Get The Job Done (*salutes*). In trying to apprehend Wesley Snipes' villain, Simon Phoenix, Spartan gets the blame for the implosion of an entire warehouse – and the subsequent death of "twenty to thirty" innocent hostages. WHOOPS, MY BAD.


The bonkers thing is, this gigantic warehouse is demolished for real – and it's an absolutely GIGANTIC explosion – but it's such an unimportant part of the movie. You'd think that kind of pyrotechnics might have been saved for the finale, but director Marco Brambilla shoots his bolt pretty early. At any rate, it sets the bar impossibly high for the rest of the movie.

Remember, this was 1993 and CGI wasn't quite up to the task of simulating believable sequences like this – in fact, the explosion used for the movie's finale (i.e. the one that should have been truly spectacular) is computer-generated and looks about ten per cent as impressive. Back in the early nineties, the only way to up the action stakes was to do this sort of stuff for real and hope no one got killed. Shortly, CG would prove to be safer and more cost-effective than practical effects; Demolition Man is one of the last movies in which real firepower actually counted for something.

After the huge, needless opening explosion, we see John Spartan cryogenically frozen and skip forward 36 years to get to the story proper. You can tell it's set in the future, because the 'E's in the title treatment don't have downstrokes – a sure sign of a civilisation that has lost its way.

What kind of society would allow a font like this?


Demolition Man's concept is really solid – a fish out of water action comedy that occasionally touches on some pretty hefty themes and has a bloody good stab at satire. With Snipes' villain on the loose, Stallone's thawed cop – who would have been considered 'traditional' even back in his own era – is frequently called 'caveman', 'primate' and 'savage' by his new colleagues, and Sly plays up to his cro-magnon persona by taking great delight in vulgarity and physical violence. It's a role that continues to suit him well: the warhorse who never knows when to quit. 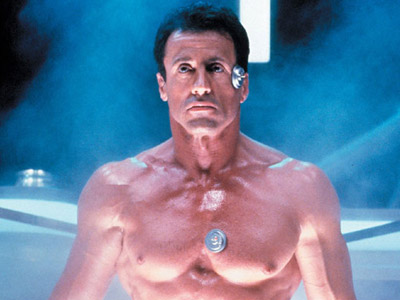 The warhorse with weird nipples who never knows when to quit.


Instantly, you come to recognise Demolition Man as the kind of movie that just doesn't get made any more – the 15-rated action movie. Maybe I'm old fashioned, but I take great pleasure in hearing a man call another man 'motherfucker'. This was from an era before 12 year-olds were the lifeblood of the industry, where swearing was big and clever and damn well par for the course. The odd 'fuck' never killed anyone – even if Spartan and co are fined every time they drop an F-bomb. 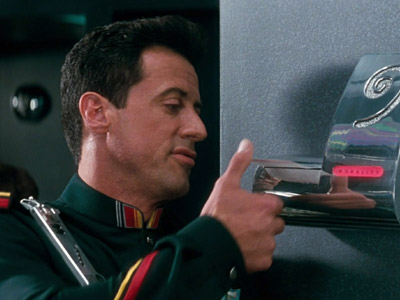 
That recurring joke is one of many comic episodes Spartan embarks on in 2032, and Stallone shows he does have the chops to handle comedy (intentional and unintentional). Spartan's love of quipping does not go unregistered, coldly analysed by Sandra Bullock's cop, and any time Sly's supercop isn't punching someone in the face, the script goes to great lengths to set him up with gag after gag. During his cryo-freeze, Simon Phoenix is implanted with knowledge of martial arts and terrorist tactics. John Spartan is taught how to knit.

It's bizarre to think how Demolition Man could have panned out. Stallone's role was apparently offered to both Steven Seagal and Jean-Claude Van Damme – neither of whom ever displayed great comfort with comedic roles. Part of me thinks that studios of the time used rising B-list stars like Van Damme and Seagal as back-ups to better negotiate a deal with the star they really wanted. The competition between Hollywood hunks was indeed fierce – Sly even manages a dig at Arnie's highly ludicruous political aspirations, although I think it's probably fair to say Schwarzenegger got the last word on that one.

Jackie Chan was an early front-runner to play Simon Phoenix, which I cannot see working at all – Wesley Snipes completely makes the role his own. Phoenix is an awful villain on paper – a mindless psycho with no particular agenda other than chaos, and for the most part he doesn't even have a sidekick or group of henchmen to boss around, meaning he talks to himself for vast portions of the movie. A by-product of being a total nutter, I guess. Maybe he's lonely.

However, Wesley Snipes does a fantastic job fleshing him out. He has a wicked cackle and a great swagger about him – none of which you suspect was in the script. You sense that Snipes was really given free reign to be as bonkers as he wished. I don't think I've actually seen any of his movies in which he looks like he's having quite as much fun. (Probably all that tax he was embezzling). One thing I will say is that Simon Phoenix can't dress for shit. An orange vest with dungarees? Is there a deleted scene in which he murders a dutch lesbian? 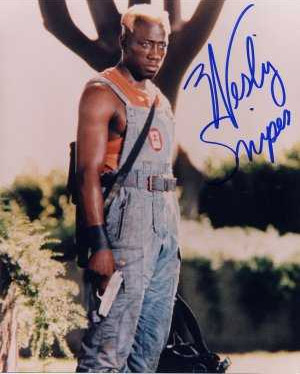 So proud of the look, he put his name on it for all eternity.

Talking of deleted scenes, I'm imagining there's a fair few gathering dust in a vault somewhere (waiting for the 2032 holo-disc special edition re-release, I'll wager). Lots of Demolition Man simply makes no sense. The first thing Spartan mentions after his meltdown is his concern for his wife, who died in a massive earthquake, apparently. It can't have bothered him that much, because in about 48 hours time, he's digi-boning Sandra Bullock via the medium of sex hat. His daughter also gets one mention and is never followed-up on, presumably because that shit would be too depressing when there are entire city blocks to destroy and jokes about seashells to be made. It's weird, because the character has no need for a wife and daughter – it'd have been perfectly fine, and a lot less weird, if he just had no family whatsoever. Maybe Sly don't play that way. 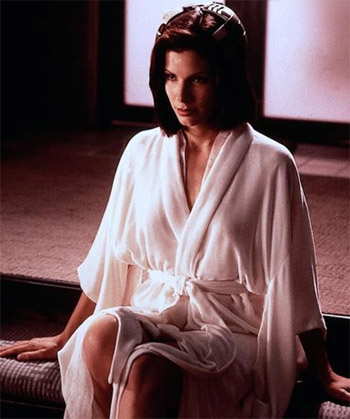 Or maybe he just wanted to bang Sandra Bullock.


Demolition Man devolves into the usual nonsense before long – desperately awful one-liners ("Cocteau's plan went up in smoke!"), monologuing villains, Denis Leary doing a bit on freedom of speech for some reason – but before it gets there, it has a lot of fun. It sort of feels like the last days of Rome – a completely decadent orgy of mayhem and destruction and running away from explosions without an ironic wink. It really is a shame they don't make movies like this any more, but that's probably more the fault of self-reflexive smugfest Last Action Hero, which stomped into the action movie yard, kicked everyone else's balls over the fence and coiled off a giant turd on the playground. Thanks again, President Schwarzenegger.

Now, to play us out with the Demolition Man theme tune, Sting, who I can only assume was the coolest person available at the time.

Thanks to The Prince Charles Cinema in Leicester Square for screening Demolition Man, despite polite society's wishes.
More:  Terribrill  Sylvester Stallone  Demolition Man  Wesley Snipes  Sandra Bullock
Follow us on Twitter @The_Shiznit for more fun features, film reviews and occasional commentary on what the best type of crisps are.
We are using Patreon to cover our hosting fees. So please consider chucking a few digital pennies our way by clicking on this link. Thanks!