Terribrill: Masters Of The Universe

Forget '80s nostalgia: I don't think there was EVER a time when making a live-action He-Man movie was considered a good idea. The kids cartoon - which, let's face it, none of us have watched in decades for fear of discovering just how shoddy and completely balls it actually was - is basically the same dumb story, over and over. The characters are barely even one-dimensional: there's a bowl-cutted himbo with a big sword who's constantly fighting an angry skeleton to save a sorceress dressed like a peacock. Why? Because kids are idiots, that's why. They'll sit open-mouthed and gawp at this stupid shit every Saturday morning, so it stands to reason they'd pay good pocket money to go see the movie, too.


Here's the thing: kiddie cartoons age badly and fade in the memory, but movies last forever. Masters Of The Universe is a brilliant example of what happens when men with the money greenlight a sure-fire financial success, then realise they actually have to make it to get paid. Live-action He-Man was always going to be a backfire: the story is still boneheaded, only now it has to be filmed for real, while the characters still suck, and now the filmmakers had to find actors shameless enough to dress like berks and spout dialogue that'd make George Lucas circa 1999 cringe.

You discover pretty soon in Masters Of The Universe that director Gary Goddard (feature credits before and after He-Man: zero) obviously realised the same thing. For starters, He-Man is barely in it. You suspect that's because Dolph Lundgren has about as much charisma as... well, as Ivan Drago. Striding around set, oiled up and wearing a giant leather nappy, he cuts a fine action hero figure, but every time he opens his mouth, actual, fully-formed turds fall out. I swear sometimes you can see him squinting at cue cards. The end credits reveal he had a speech coach, who I'm presuming has long since committed suicide from shame. 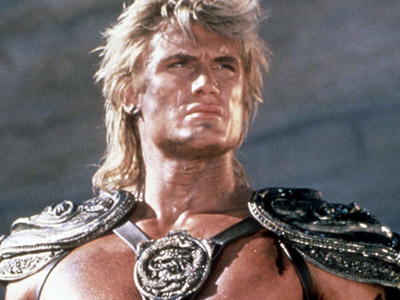 DOLPH SEE BIRD BUT IT FLY AWAY


With the movie shot both on He-Man's home planet of Eternia and Earth, Dolph's screen-time is dwarfed by the human characters who he must save. Courteney Cox is perfectly acceptable as damsel in distress Julie (even if her sleepwear would have been considered frigid in the Victorian era), but she's lumped with a boring boyfriend, Kevin, who finds the movie's macguffin - a cosmic key that acts as a wormhole between worlds and doubles as a totally radical synthesizer, dude. (*air keytar solo*)

At one point, when the movie requires Kevin to perform his own brand of heroics to save the day, he sulks and mumbles: "I can't... I'm just a keyboard player in a high-school band!" What tension! What emotion! And this guy gets more screen time than He-Man in his own movie. Even James Tolkan aka the bald, angry headmaster from Back To The Future, rivals Lundgren for minutes on screen. Tsk, slacker.

So, on one hand, you have Dolph Lundgren channeling Joey Tribbiani. On the other, you have Frank Langella, wearing the world's most uncomfortable Halloween costume, channeling Shakespeare. If you think I'm being dramatic, I'm not. Langella, hiding behind a prosthetic skull mask that never even pretends to be anything other than rubber, added lines from Richard III to give his character more gravitas. In an adaptation of He-Man. Starring Dolph Lundgren. It's utterly bizarre, but at least he's trying. 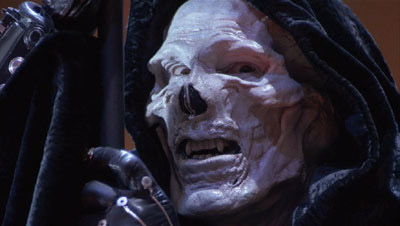 "Verily, mine is a face made from finest chewing gum, forsooth."


And then you have the characters from Eternia. For reasons unknown, the writers invented new villains for the movie (because apparently Ram-Man's fee would have been extortionate). Say hello, then, to evil henchmen like Karg (David Bowie if he got stuck in his Labyrinth for 400 years) and reptilian Saurod (the alien from V dressed as Darth Vader). These were pre-CG days so prosthetics were the only way to create them, but you can tell that the actors inside the costumes were uncomfortable as hell, and IMDB's trivia corroborates that, reading like a catalogue of misery/hilarity. 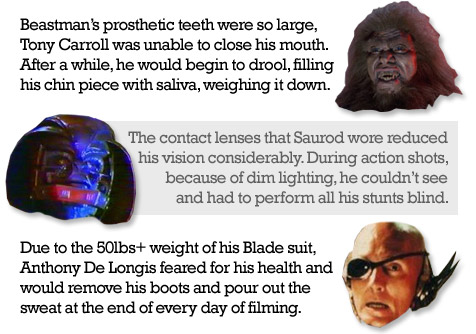 Obviously the idea of having little floating ghost Orko in a live-action movie was ridiculous, so they replaced the character with a small, dwarf-like creature called Gwildor, who looks like Ain't It Cool's Harry Knowles in miniature. Gwildor is supposed to be the movie's comic relief, which he achieves, but only because his rubber mask is so poorly fitted, every line comes out looking like "BA BA BA BA BA BA". They never did master lips, those prosthetics guys. 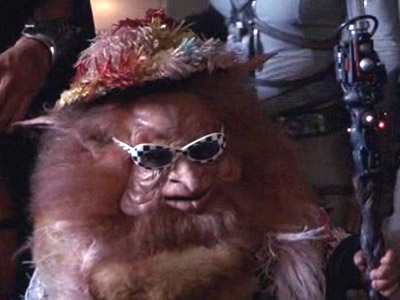 Fashion, on the other hand, they nailed.


Yes, Masters Of The Universe is one of those wonderful movies that has absolutely no idea how ridiculous it is. It's so camp it'd make Kenny Everett blush (Man At Arms' bushy moustache alone has been known to inspire all-night raves), but it's played straight as an arrow. This leads to cracking lines like "Tell me about the loneliness of good, He-Man... Is it equal to the loneliness of evil?" and "I ache to SMASH YOU OUT OF EXISTENCE!"

Still, you have to hand it to Frank Langella's Skeletor: he certainly wasn't lacking in confidence. Misplaced confidence, but still.

More:  Terribrill  Masters Of The Universe  He-Man  Dolph Lundgren  Courteney Cox
Follow us on Twitter @The_Shiznit for more fun features, film reviews and occasional commentary on what the best type of crisps are.
We are using Patreon to cover our hosting fees. So please consider chucking a few digital pennies our way by clicking on this link. Thanks!