The 10 dumbest things about Green Lantern

The words of a dullard, ladies and gentleman. This is the main problem with Green Lantern as a movie – if you're going to give your lead character the ability to literally create anything he can imagine, you'd better make sure your writers have some pretty mind-blowing tricks up their sleeves.

And not just, you know, giant fists. Or brick walls. Or catapults. Or a chainsaw. Or a pair of giant springs. Or another, even bigger, fist.

In other words, the only things Hal conjures with his power ring are the kind of things that were easily illustrated in a 1940s comic-book. Not once does Hal imagine anything genuinely surprisingly or incredible. The closest he comes to projecting something truly memorable is when he lands a crashing helicopter on a giant Hot Wheels track, which then wheels around a party, almost killing several dignitaries. Yeah, maybe it's best he doesn't exert himself too much.

Also, I'm expecting a scene on the DVD where Hal imagines himself with a green, 10-foot cock. Because it'd be the first thing any of us would do. 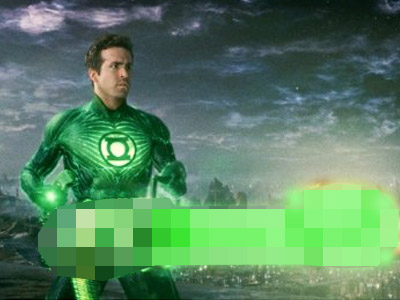 "I KNOW, RIGHT?"
How do you defeat the forces of fear?

According to Green Lantern, you fly it into space, where you punch it so hard in the face, it careens into the Sun. Spoiler alert!
Soft corps

We're told several times by all manner of fish chickens and red aliens that the Green Lantern Corps are the mightiest warriors in the universe, and that they number over 3,600. Impressive, right? Together, you'd figure they'd be an unbeatable foe.

But when Parallax rears his ugly head, how many Lanterns does Sinestro send to defeat him? Four. FOUR. After that, they basically admit defeat and wait for the universe to be destroyed. Question: couldn't a few more of the 3,596 Lanterns left have put in a few extra shifts and tackled this evil foe together before they totally stopped giving a fuck?

Even at the climax of the movie, when Hal is busy punching Parallax into the Sun, none of the Lanterns are present, except for Sinestro, Tomar-Re and Kilowog, who just kind of float over to Hal after he's finished vanquishing evil. Couldn't be bothered to help, guys? "Yeah, me and the guys were going to step in and help but we thought you were doing such a great job, we'd leave you to it. Also I have a dead leg." 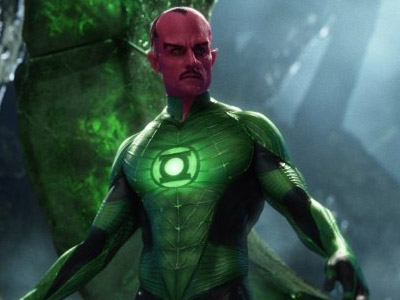 "And a cold."
All hail the Guardians

Apparently the keepers of peace in the universe were designed on a PSone and speak in a language which their own lips are unable to render convincingly. Bow before them!
A c**t of many colours

Green, we are told, is the colour of willpower. Why? It just is: SHUT UP. But yellow? That's the colour of fear. OOOH. But wait, isn't green made by mixing yellow with blue? So what's blue in this universe's colour palette? I'm going to say 'horniness'. Also, pink is 'hungry', orange is 'mistrust of pigeons' and turquoise is 'that feeling you get when standing in front of a cupboard when you forget what you went to the cupboard for'. 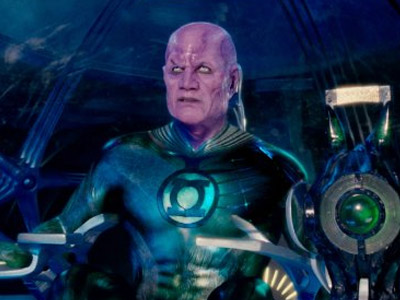 You don't even want to know what this guy is all about.
More:  Dumbest  Green Lantern  Ryan Reynolds  Blake Lively  Mark Strong  Martin Campbell  Peter Sarsgaard
Follow us on Twitter @The_Shiznit for more fun features, film reviews and occasional commentary on what the best type of crisps are.
We are using Patreon to cover our hosting fees. So please consider chucking a few digital pennies our way by clicking on this link. Thanks!
« Previous Page