Rise Of The Planet Of The Apes dragged its knuckles into cinemas a few weeks ago, meeting with almost universal acclaim. And rightly so, it's a lot of fun. But just because a movie is good doesn't mean it can't be as dumb as a pile of sticks, with plot holes big enough to float the Titanic through. In 3D.


I wasn't expecting much from Rise, partly due to the uninspiring cast and slightly cartoonish effects, but mainly because the trailers seemed like they were giving away all the best bits. Fortunately the whole turned out to be more than the sum of it's parts - which is lucky because some of those parts were the cack-handed science and gibberish plot.

With that in mind, here's our rundown of moments when the scriptwriters took a step back from their Macbooks, pulled down their shorts and literally flung the plot at the screen. Well, not literally but that's what all the kids are saying these days. Some fairly massive spoilers ahead, so don't say you weren't warned...
X-Ape Origins: Caesar 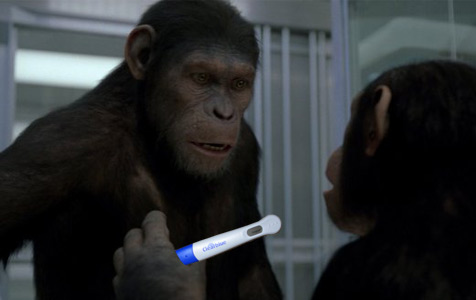 Not saying it's highly improbable for the animal handlers and scientists at the research lab to miss a pregnant chimp, but... wait that's exactly what I'm saying. The logistics involved in not noticing a pregnant anything are huge - moreso in this case as the scientists would have been keeping Bright Eyes under observation for the effects of the drug. Also: did she eat the afterbirth?
James Franco's PowerPoint presentation 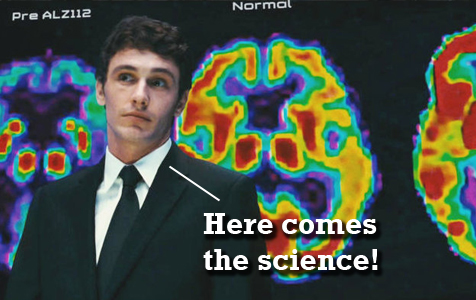 If we learnt anything from Rise, it's that scientists will blag research funds based on any old flimsy result. And it very nearly worked; the assembled investors were about to fork over millions of dollars when Franco's prize chimp crashed the party - hotly pursued by a security guard who seemed way too trigger-happy in a room full of people whose suits probably cost more than his house.
Less than meets the eye 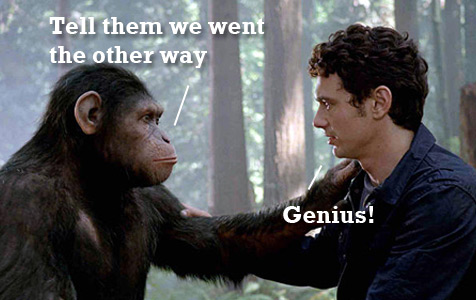 Caesar has two objectives: 1) escape into the woods, 2) rut in the woods. How else is he going to raise an army to conquer Earth? But apes have a similar pregnancy cycle to humans: 225 days. That's over 7 months for the humans - with their helicopters and heat vision and guns - to hunt a bunch of creatures who have no weapons, and whose diet now consists primarily of squirrels and pine cones. Not exactly Moses, Caesar.
The Emperor's Old Clothes 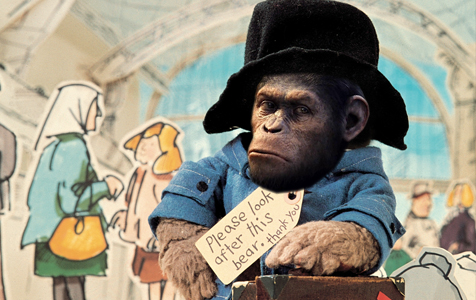 It may just be a personal bugbear, but Caesar keeping his clothes when he's meant to be ingratiating himself into Brian Cox's Miserable World of Monkeys smacks of the filmmakers realising nobody would be able to tell him apart from the other chimps. And if he loves clothes so much why didn't he ask James Franco to bring him some more, instead of sitting about in rags like a skank?
James Franco's Boss 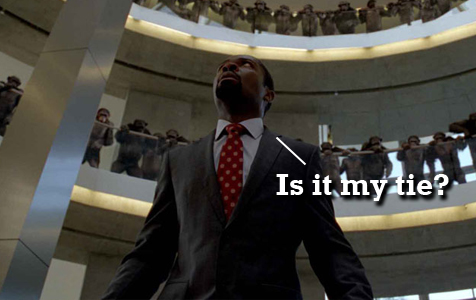 When James Franco's boss isn't bossing people about, he loves nothing better than bossing around the laws of science, nature and health & safety. And when that all goes tits up, he'll quite happily jump in a police helicopter and boss them about too. LIKE A BOSS. Apart from to have something happen to a prominent character; why did the police helicopter come to pick him up again?
More:  Rise Of The Planet Of The Apes  Monkeys  Dumbest
Follow us on Twitter @The_Shiznit for more fun features, film reviews and occasional commentary on what the best type of crisps are.
We are using Patreon to cover our hosting fees. So please consider chucking a few digital pennies our way by clicking on this link. Thanks!
Next Page »