Happy the man who spends his Saturday afternoons browsing his local charity shop for DVDs with his head tilted to one side. But even happier the man who can turn that experience into a competition against his friends, and a compulsion to own and catalogue things into sweet, satisfying victory. We give you: The £10 DVD Bargain Challenge. (*dramatic opera crescendo*)


The second-hand DVD store is a place where you'll find men like us. We like to look at DVDs. We like to own them, caress them gently and arrange them into alphabetical order. And we like to find BARGAINS.

Pre-used DVDs are dirt-cheap these days, particularly since Blu-rays took off, and you can usually get yourself a pretty solid selection without spending much more than a tenner. In the spirit of celebration, we've set each other a challenge: Rob, Ali, Matt, Luke and I will, over the course of the next five weeks, each spend £10 on second-hand DVDs, justify our choices here, and invite the others to pass comment and mark us out of 10. The winner will receive the admiration of his peers, and some funny looks from the people behind the counter. 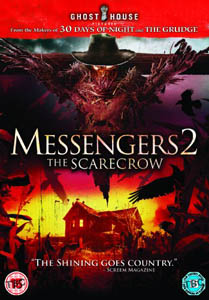 Any trawl through a second-hand DVD store - or in this case, the 99p store, in amongst the bin liners, One Direction calendars and bottles of bleach - will turn up hundreds of straight-to-DVD horror films with titles like this. But the wonderful thing is the surprises they'll throw up.

I got this home and stuck it on to find it starred Daryl from The Walking Dead, and was a better film than it had any right to be. Schlocky, by-numbers fare, with a healthy dose of gratuitous, Channel 5-style nudity, but with a perfect understanding of the beats and false-start shocks you're supposed to hit in horror, and a monster that looks far more authentic than the $500 or so it obviously cost to put together. 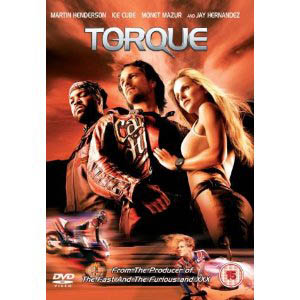 You'll also find a decent bundle of generic action flicks, and nothing says DVD bargain bin more than (a) motorbike/car-racing films and (b) rappers-turned-actors. I was drawn in by the simplicity of the title on the spine, and was delighted to discover that Torque starred Ice Cube as its main villain. I've got to say it was a good day.

Then I watched 20 minutes of it a week later. That was not a good day. 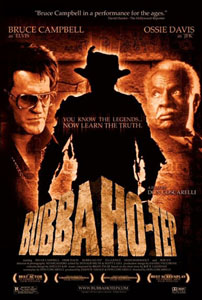 Honestly, I just wanted to find out what the fuck it was. From what I could glean from the box, Bubba Ho-Tep is about Elvis in a nursing home fighting a reanimated Egyptian mummy, along with his sidekick, an old black guy who claims to be John F Kennedy. It was also released in a two-disc special edition packed with extra features, which suggests that there was a demand for this. I later found out that it has a 78% rating on Rotten Tomatoes. This was too fascinating a prospect to pass up.

My favourite bit is the ending: Elvis thinks he's killed the mummy by setting fire to it then, of course, it springs up again. So he sets fire to it. Again. That seems to do the trick. 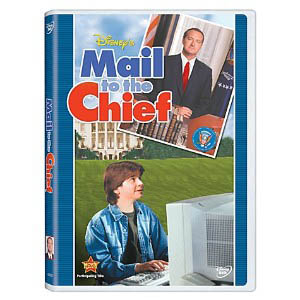 A precocious kid who posts on a political messageboard turns out to have been talking to the President (Randy Quaid), who is logged in under a pseudonym hoping to understand the ordinary voter. My reason for choosing this Disney straight-to-DVDer was simple: I looked at the cover and knew, with absolute, total certainty, that whoever wrote it came up with the title before the plot. 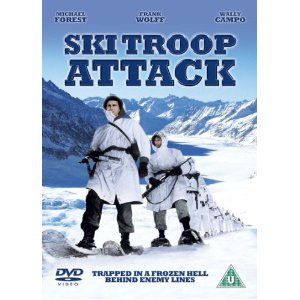 This is a 1960 Roger Corman movie, as it turns out, which was a little disappointing, as from the title on the spine I'd imagined a gleefully daft 80s action straight-to-DVDer. Still, it's the story of two US GIs pursued by a German ski troop during World War Two, and I've seen very few films with that plot that weren't a success. And it only cost 50p. 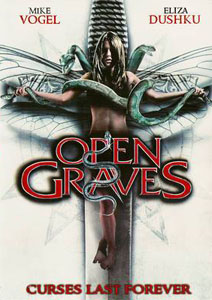 My other choice from the 99p store, I can't help but regret my purchase of Open Graves to some degree. While it begins promisingly enough, with a quick helping of folk having their fingernails removed by the Spanish Inquisition in the 15th century, it then focuses mainly on a group of good-looking American teenagers being systematically killed in various unpleasant ways by an unseen malevolent supernatural force. I mean, whoever thought that was a good template for a horror movie? 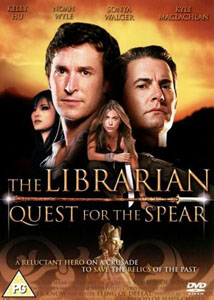 Some of my favourite DVDs to come across in a second-hand store are the ones that make you think: "Hang on, isn't that just [insert name of extremely popular big-budget film] done on the cheap?" As I picked up The Librarian: Quest for the Spear and read the back, it became clear that I had chanced upon the Lidl Indiana Jones.

Noah Wyle (Asda own-brand Harrison Ford) is a bookish archaeologist who has to find the three pieces of the Spear of Destiny before some evil types do because it holds the key to the universe or whatever. A sexy/feisty girl in combat trousers and a vest top helps him out and probably sits on his face every now and then. Kyle MacLachlan, I'm guessing from his scowl on the cover, is the leader of the evil guys. At the time (2004) there hadn't been an Indiana Jones film for about 15 years, so why not make another one without spending a lot of cash? Makes sense to me.
The verdict

Ali: A mixed bag, I'll say that much. I can't argue with the purchase of Torque for just £1.50 (and yes, Ice Cube DOES say "Fuck the police") and I think you've nailed Mail To The Chief - any movie with Randy Quaid and a pun as a title is okay by me. However, you've massively overpaid for John Carter Of The Temple Of Doom (that shit should be on the pound saver menu) and you lose points for clearly having never heard of Bruce Campbell's Elvis monster movie Bubba Ho-Tep. Sorry, I'm just a traditionalist like that. 7/10

Matt: Ali's right, you lose points for not knowing what Bubba Ho-Tep is - and yet you regain some kudos for scoring it at just £2, which is an impressive purchase. Also, if we're rating this based on how interesting your selection is, I'm afraid I'm going to have to dock points for Torque just because I swear I see at least seven copies in every bargain DVD place I ever visit. Mail to the Chief, however, is a remarkable find - a film so confident in its winning title, it has completely dispensed with any teasing taglines. And good work on finding Noah Wyle playing an action adventurer. Also, extra points awarded for Eliza Dushku. Just because. 7/10

Luke: I concur with Ali and Matt - you shouldn't tell people involved in competitive scoring loosely based on film knowledge that you haven't heard of Bruce Campbell's last decent film. If this really was Come Dine With Me that would be the equivalent of trying to entertain a black guest by belching ragtime songs in their face. Besides that, this is an impressive opener in both the price/item and good/guilty pleasure stakes. Ski Troop Attack sounds particularly amazing, as does Kyle Maclachlan's Quest For Dignity. Clearly the desolation of a place once voted "Britain's Worst Street" has, ironically, afforded you an advantage in this budget DVD purchasing contest. 8/10

Rob: I'm not sure if it's a good thing or a bad thing that the only films I've heard of on this eclectic list are Torque and Bubba Ho-Tep. Still, you can't fault a mere 50 pence for a Roger Corman 'classic'. But I have to agree with Ali in saying you greatly overpaid for the very poor man's Indiana Jones knock-off. It might star that bloke from ER and the bad guy from The Flintstones but £2.50 is a little much. However, you redeem points for getting change from a pound coin on two occasions and of course, Mail to the Chief, a film that's jumped straight to the top of my curiosity list. Combine it with Santa With Muscles and you've got yourself a cracking rainy Sunday afternoon. 7/10
Total score:
29/40 + 7 bonus points for buying 7 DVDs = 36

My mission is at an end. I have earned the scorn of my peers through not having heard of a film in which Elvis fights a mummy. Also, Luke has seen fit to diss my hood, meaning I now have to shank him in a postcode war or something. (*throws up unconvincing gang sign*) What I've gained in knowledge and entertainment hours, I've lost in self-esteem. But is this not the gauntlet we run as second-hand DVD purchasers? Are we not staking our very souls on our choices?

No, that's talking it up a bit, frankly. Still, let's see how the rest of Team Shiznit get on, starting next week.

More:  DVD Bargain Challenge
Follow us on Twitter @The_Shiznit for more fun features, film reviews and occasional commentary on what the best type of crisps are.
We are using Patreon to cover our hosting fees. So please consider chucking a few digital pennies our way by clicking on this link. Thanks!