For the second week of our £10 DVD Bargain Challenge (*dramatic opera crescendo*), I decided to go down the charity shop route. Along with card shops and banks, my local town knows a thing or two about charity shops. Plenty of potential then to sniff out a cheap bargain, and help cure cancer, £1.50 at a time. Plus, I distinctly remember seeing District 9 on Blu-ray for £1.80 at The Cats Protection a few months back and was hoping it was still there.


Problem number one: The Cats Protection was closed. At 3pm on a Friday afternoon. Problem number two: so was Oxfam. They might only run on a volunteer basis but this was just silly. But the closure of one of the big time players in the charity shop world wasn't going to stand in my way of finding a plethora of DVDs of questionable quality.
Locations: Cancer Research, Age UK, St. Neots, Cambridgeshire. The 99p Store, Huntingdon
Amount Spent: £9.97
Number of DVDs bought: Five 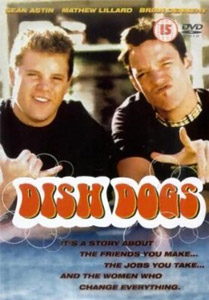 It wasn't until I'd left Age UK that I thought perhaps I'd over-paid for DVDs I'd never heard of. But I imagine charity shops don't have much in the way of a refund policy.

So then, Dish Dogs; It stars a pre-Lord Of The Rings Sean Astin and a post-Scream Matthew Lillard as two friends who travel California going town-to-town, taking jobs in restaurants as dish washers while questioning their love-lives, discussing philosophy, and surfing. And, well, that's it. Shannon Elizabeth crops up as a stripper and almost immediately gets them out, which is nice. It feels like a spiritual sequel to California Man, but Sean Astin does come across as a little autistic. 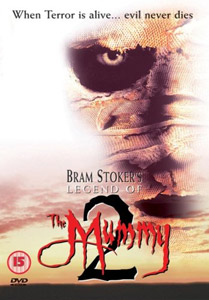 This one was still in its cellophane wrapping, which had me wondering how this unused DVD found its way into a charity shop; an unwanted present perhaps? Maybe someone won it for coming last in a quiz. But upon watching it, I can see why the previous owner didn't bother to un-wrap it.

My god, the acting, the script, the dialogue, it's all just terrible. A cliché group of teenagers, one for each social clique, disturb an Aztec mummy they're studying... and you can guess the rest. This is B-movie horror of the lowest order and I struggle to see what Bram Stoker's affiliation is to it either. But it does list an 'animated menu' and 'scene selection' as special features. Really gives you the sense they're trying their best, doesn't it? 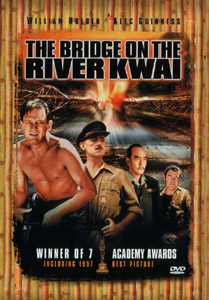 I might have overspent on a couple of my choices, but I can guarantee no-one else found a film that not only starred Obi Wan bloody Kenobi, but won seven Oscars and is preserved in the United States Library of Congress National Film Registry. All this for half the price of a low-rent comedy starring a hobbit and Shaggy from Scooby Doo.

From that famous tune whistled by the PoWs, to Alec Guinness getting slapped around the face with The Geneva Convention, it's all very, prim, proper, and most of all, shows the power of good old British morale. A genuine iconic piece of cinematic history... for a quid fifty. It almost makes you want to salute the flag. 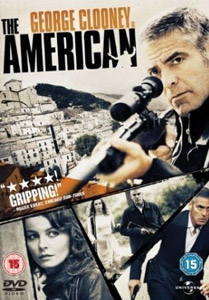 This is the ace up my sleeve - a George Clooney film that's less than two years old on sale for less than a bottle of motorway service station water. It's the true meaning of charity shops. Yay to helping cure cancer.

Having been on my 'to see' list since it came out, The American won't be making a return journey to the charity shops like the others will be (guess which ones will). The film opens with a bearded, content-looking Clooney sat at the foot of a bed, sipping whiskey, with a naked woman stretched out behind him. I imagine this isn't too detached from reality. 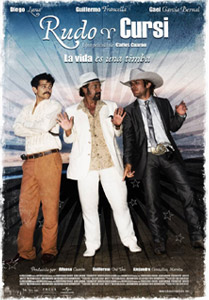 I had £1.03 left in my £10 budget, so this was a purchase made out of sheer desperation more than anything - and I wasn't holding out too much hope for it. This was one of ten copies of it in my local 99p Store.

Starring Diego Luna and Gael Garcia Bernal, directed by Carlos Cuaron and produced by Alejandro Gonzalez Inarritu, Alfonso Cuaron and Guillermo del Toro, this is an impressive who's who of the Mexican film industry. From what it seems, they've come together to make a Spanish-language football comedy. What's astonishing is this was only made in 2008. I'll assume they were doing a favour for Carlos 'brother of Alfonso' Cuaron.
The verdict:

Ali: An eclectic mix, certainly, but I think you've overpaid for the shit ones (Dish Dogs looks like the cinematic equivalent of actually doing dishes) and underestimated how often The Bridge On The River Kwai is on TV at Christmas. The American is a nice find but is probably 'little-seen' for a reason i.e. it's ponderous and poncy and doesn't have many gunfights or Expendables in it. Also, £3 for that awful Mummy movie? You've been had. I probably had more of an input into the screenplay than Bram Stoker did. I was going to give you 6/10 but then I saw Matthew Lillard's hideous face and soul patch, and I thought, 'Fuck you, Matthew Lillard'. 5/10

Matt: My first thought is that you'll be hard-pressed to find a bargain in charity shop these days. Where you've paid £2.99 for Dish Dogs and Legend Of The Mummy 2, you could have probably got two higher-profile movies from your average supermarket basement bin. Still, The American for £1.50 is an awesome find, and probably shows up the ignorance of whoever put it on the shelf. I'm pretty sure Bram Stoker's Legend Of The Mummy is one of those free DVDs you used to get when buying a cheap DVD player bundle, which came with 10 crappy films in the box. In which case, £2.99 is definitely a massive overspend. Also, Rudo & Cursi sounds like a comedy about two swearing Mexican bandits so... um... well done? I'd give you a score of five out of 10 but I'm too scared of seeming like a massive bastard, so here you go: 5.5/10

Luke: I sympathise with you Rob, because I'll probably have to resort to the local charity shops too due to the lack of a convenient CEX or pound store. So well done for making the most of what was surely a shitty selection comprised of unwanted gifts and whatever Nan had on her video shelf. But I must protest at the use of the phrase "gets them out" with regard to Shannon Elizabeth: gets what out exactly? This ain't no guessing game yo. Clooney and Guinness add a much needed double-bill of charm and class, and they were purchased for a good combined price. If only you'd been more frugal elsewhere - blowing over half your budget on a mummy film and Bottom Rung With Matthew Lillard shows a dangerously cavalier attitude to guilty pleasures, especially as you can buy BS's Legend Of The Mummy 2 on Amazon for 1p + £1.26 postage. Which means someone valued the cost of an envelope and a stamp at ONE HUNDRED AND TWENTY SIX times the worth of the film you'd be receiving in it. So in conclusion: you should have bought all ten copies of Rudo & Cursi. 6/10

Ed: I'm certainly a fan of your overall approach. You've spent well on The Bridge On The River Kwai and The American, both of which are, like, proper, serious and good. I think your other choices betray the tough decision we'll all have to make at some point, though: how to spend the change when we've bought the good stuff already. I'll give you horror points for Legend Of The Mummy 2, though it's overpriced, but £3 is far too much to pay to see Shannon Elizabeth's rack again, and as for Rudo & Cursi: given that the Mexican film industry consists of three guys in Tijuana using a Nokia N95 to shoot videos of themselves performing $50 abortions in the back of a van, "an impressive who's who" of it is no great shakes for me. 6/10
Total score:
22.5/40 + 5 bonus points for buying 5 DVDs = 27.5

Well, it seems this experiment has done little more than illustrate I can't be trusted with a £10 note in an over-priced charity shop. And as a consequence, I've been belittled by my 'colleagues' for my brash frivolity (fuck you, by the way). But I'm still going to blame Matthew shitting Lillard and that bastard of a mummy. Back to the charity shop you go.

Let's see how my fellow Shizniteers get on in the coming weeks.