The 10 most unbelievable, most exhausting, jazz-handiest moments from The Greatest Showman

Hugh Jackman has spent his adult life trying to make musicals happen. Remember when he hosted the Oscars in 2009 and proudly proclaimed “Musicals are back!” even though they weren't, in fact, back? Remember when his musical Las Vegas crime thriller Viva Laughlin got shelved after two episodes, and then when you subsequently realised *that* was the rage that was really driving Wolverine? Well, musicals are properly back thanks to La La Land, which had nothing to do with Hugh Jackman, so now Hugh Jackman is doing a musical to prove to everyone that Hugh Jackman and musicals belong together. The Greatest Showman isn't as good as La La Land, obviously, even if it does share the same, uh [checks notes] lyricists, but it is good for one thing: a big, fat injection of industrial grade cheese into the bloodstream. Here are the best bits. 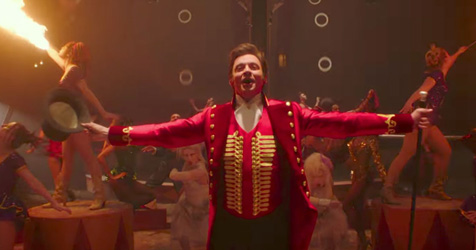 Is "songtage" a thing? A song montage? I'm making it a thing, in honour of brave Hugh Jackman, pioneer of the songtage. The opening 20 minutes of The Greatest Showman are basically one overlong montage set to music, starting with a young actor fantasising about how he might possibly turn into Hugh Jackman in later life. Wouldn't you know it: he does! Hilariously, the songtage expertly portrays the passing of time by abruptly cutting from a 12-year-old kid to 49-year-old Hugh Jackman with slightly shaggier hair. Dreams can come true! Maybe you too will turn into Hugh Jackman mid-song!
Any scene where Hugh Jackman is wearing a hat 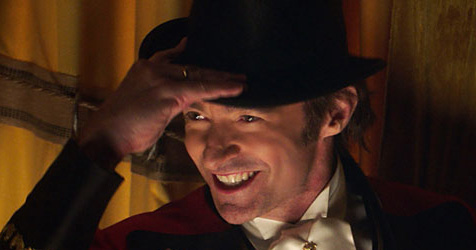 Hugh Jackman wears the shit out of his ringmaster hat. He caresses it lovingly, like he does his wife, Deborra-Lee. He strokes it sensually, like he does his wife, Deborra-Lee. When the cameras weren't rolling, I wouldn't be surprised if he had full intercourse with that hat, being sure to give it a rinse before he popped it back on his head. Musical lovers, you may think there is a limit to the number of times Hugh Jackman can eye-fuck his audience while lasciviously rubbing the rim of his hat. The Greatest Showman is here to prove you wrong.
The scene where he and Zac Efron have rough sex on a bar 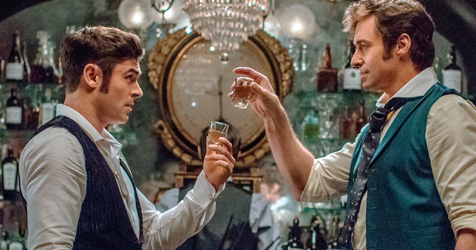 Through song and dance, obviously. Efron plays James Bailey, Barnum's business partner and full-time tent erector. The scene in which Jackman plies Efron with shots and begs him to work with him is full of lines like “Come with me and take the ride / I'll take you to the other side”. It stops just short of having Jackman drink the shots from Zac Efron's belly button. There's so much aggressive hat rim rubbing in this scene I started to feel faint.
Zac & Zendaya: a very modern old-timey love story 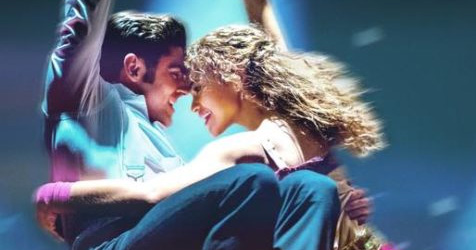 The Greatest Showman tries its hand at a bit of racial politics by having Efron's character fall in love with a trapeze artist who is (*adjusts monocle*) mixed race! Society won't, and don't approve of this union! Racism sucks, as does the exploitation of the disfigured and the disabled - but racism sure sucks! The only problem is, Zac Efron and Zendaya fall in love via longing glances and script directions only, not actual words or human interactions - in fact, I'm pretty sure the only words they utter to each other are their names. Then, hilariously, they enjoy one [1] hand-hold until a disapproving glance causes them to 'break up', in silence, about eight seconds after they 'got together'. Come for the forbidden romance, stay for the duet on the trapeze. Z&Z4EVA.
Hugh Jackman almost has an affair 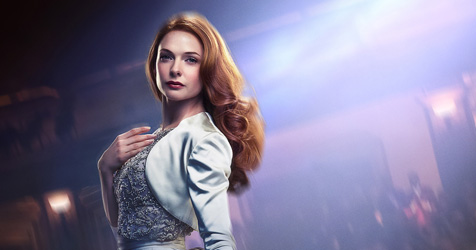 One section of the movie sees Barnum become besotted with Rebecca Ferguson's character Jenny Lind, billed as “the world's greatest opera singer”, who doesn't sing opera and isn't that great. Married as he is, I enjoyed these scenes because I thought the film might take a darker turn if Jackman took the plunge, so to speak. Edge! Flaws! A frisson of excitement! Alas, no affair, because that would not align well with Hugh Jackman's new sexless PG family man brand. The Hugh Jackman of The Greatest Showman doesn't have any genitals at all, he's like a smooth action figure down there, and he literally gets Michelle Williams pregnant by dancing at her.
The freaks do some dance-fighting 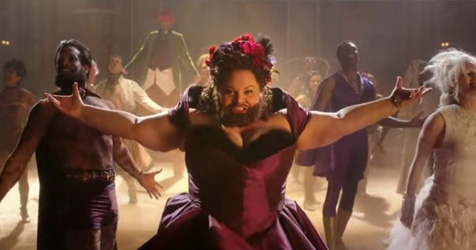 Everything in The Greatest Showman is a dance-something. Lot of hyphenated action in this movie. Characters don't walk, they dance-walk. They don't talk, they dance-talk. So it stands to reason when Barnum's menagerie of freaks is set upon by an angry mob, they don't just fight, they dance-fight with a 5-6-7-8 and a song in their angry blood. There is an alternate cut of this scene, where the mostly effete and physically ailing circus performers get battered into freakpaste by the mob, but not in this movie, not in The Greatest Showman, where everything must be done in perfect 4-4 rhythm. You can't even take a dump in Barnum's toilet unless you do it while tapping your feet.
The Queen Victoria scene 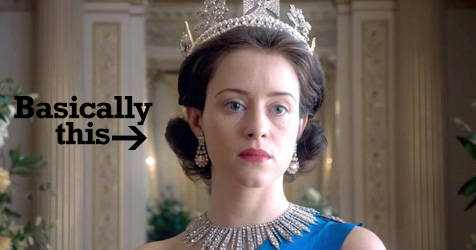 There exists, as a centerpiece of this movie, a bizarre scene so drunk on its own piss I had to double check I wasn't hallucinating it - a scene where Barnum and his freaks meet the Queen. Okay then! I mean, it's Queen Victoria, even though she looks and speaks and has a dog like Queen Elizabeth, but okay! Someone's been watching The Crown! Barnum's little midget performer steps out of line with a bit of PG-friendly New York banter aimed at the Queen, and for a second it looks like no monocle in the room will go un-dropped, but Blackadder Queenie eventually breaks into a haw-haw-haw, then everyone starts to laugh, all laughing like fucking maniacs, then the scene cuts away from this mad hysteria with a jolt, leaving you questioning whether it ever even happened at all.
The short guy wasn't short enough 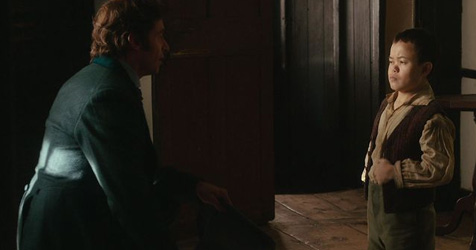 Just an FYI, for the role of pint-sized performer 'Tom Thumb', the filmmakers did the right thing and hired Sam Hunmphrey, a dwarf actor with an actual genetic disposition for authenticity, instead of going the 'Gary Oldman on his knees' route that so many films (okay, one specific film) go down. Except, even at 127cm tall, the actor wasn't considered small enough, so according to the movie's IMDB trivia, he still had to shuffle around on his knees, and then the movie's effects team ended up CGing his actual legs off. Which does put a dampener on the whole authenticity/sensitivity thing.
The bit where Jackman channels Alan Partridge 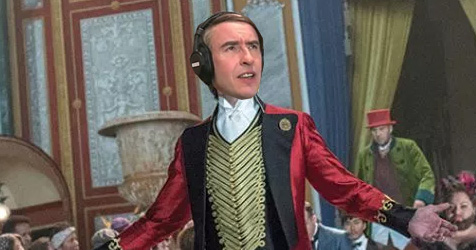 Look, I love Hugh Jackman's devotion to the twin mediums of song and dance. I love that he's aiming for stardom in the truest sense of the word: genuine screen presence à la Cary Grant or Fred Astaire. But even the staunchest Jackman apologists will have to admit there's a significant chunk of Alan Partridge in the DNA of this performance. There's one specific scene, where Jackman is singing the blues while looking over framed newspaper clippings of his past achievements, when suddenly the focus shifts and it's Jackman's face reflected in the glass, only he's singing too loud *and* too high. It's the perfect cross between Partridge's valiant attempt at singing ‘Close To You' to his valentine in the wrong key, and Alan falling foul of his limited vocal range during the Knowing Me Knowing You ABBA medley, relying on volume when he can't hack the pitch. All it's missing is an "Aha!" and some finger guns.
The realisation that PT Barnum was probably actually a massive prick 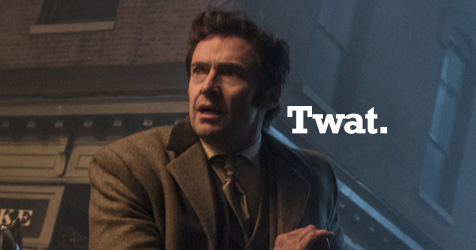 For all of the movie's singing and dancing and dance-fighting and sex-dancing, you eventually realise that Barnum basically learns nothing throughout, and essentially fails upwards the entire movie. He gets his first massive bank loan based on a fraud that is never spoken of again, he exploits his freaks by blackmailing them and selling them all the same “humbug” about being loved, he exploits his audience by faking most of the freakery, then when high society comes calling, he shuns the performers who made him a star, sacks off his wife and daughter, loses all his money and fucks his entire empire. Then, when it's all burned to shit, his freaks forgive him, his wife takes him back, the critic who hated him suddenly becomes his best mate and his business partner stumps up the cash to revive the circus. Barnum rises again, like a phoenix from the flames who had to borrow money from all the other phoenixes! Musicals are back!

More:  The Greatest Showman  Hugh Jackman  Musicals  Top10
Follow us on Twitter @The_Shiznit for more fun features, film reviews and occasional commentary on what the best type of crisps are.
We are using Patreon to cover our hosting fees. So please consider chucking a few digital pennies our way by clicking on this link. Thanks!