This week sees the release of Adam Sandler's Jack And Jill, in which the comedian plays both a man AND his crazy twin sister. We're not saying it's going to be terrible, but we are saying that it's surely a low-point in the career of a man who, these days, has more misses than hits. As we once did with Nicolas Cage, let's plot Adam Sandler's movie career in matrix form. Ah, the hell with it: Jack And Jill looks terrible.


As Adam Sandler's career presses on, with well over a billion dollars of box-office to his name, it's hard to believe he's a man who once commanded, if not critical respect, then at least a begrudging admiration. He's a man who packaged his own goofy schtick - his dumb manchild persona, prone to churlish outbursts of anger - and made it accessible to millions. The Wedding Singer? Happy Gilmore? Billy Madison? LOLfests, every one. Then he made Little Nicky and all of that went to Hell.

The frustrating thing is that every once in a while, Sandler will put in a great performance in a serious role - like Paul Thomas Anderson's Punch-Drunk Love, or Judd Apatow's Funny People - forcing you to reassess the rest of his work to see if you were just being a humourless dick. Usually, he follows up said critical hit with a total turd, confirming that, no, you weren't. Funny People marked a turning point, you felt - in it, he played an ageing comedian who was tired of making shitty lowbrow comedies. "This is incredible!" said everyone. "There's no way he can go back to making lowbrow crap after this!"

Then he made Jack And Jill and all of that went to Hell.

Because Adam Sandler's career is so sporadically entertaining, I thought he made the perfect candidate for the matrix treatment. So, here's his full spread, minus the odd cameo (funnily enough, I missed Bob Saget's Dirty Work, and his Coneheads appearance is too brief to rate seriously). Feel free to tell me I'm wrong in the comments. 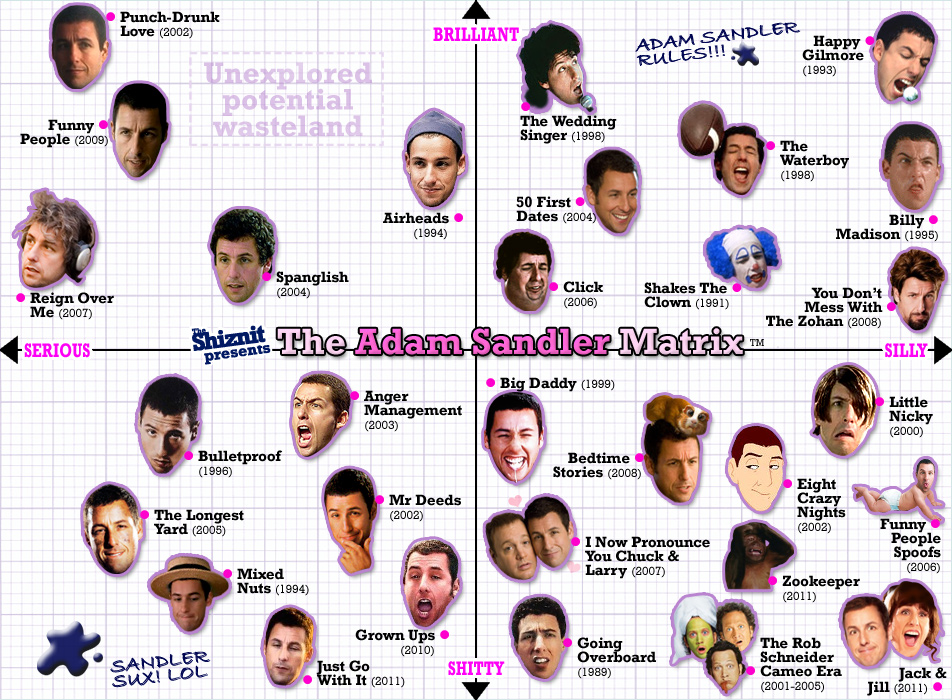 
So what does the future hold for Adam Sandler? That shitty/silly quadrant is getting too crowded for my liking, and the irony of Jack And Jill being even shittier than the fake Funny People spoofs almost reversed the polarity of the entire matrix. Well, there's I Hate You, Dad to come in 2012 (potential indicator of quality: Vanilla Ice is making a cameo), plus animation Hotel Transylvania (starring Kevin James as the voice of Frankenstein!) so there's no sign of a return to form any time soon.

More:  Adam Sandler  Jack And Jill  Matrix
Follow us on Twitter @The_Shiznit for more fun features, film reviews and occasional commentary on what the best type of crisps are.
We are using Patreon to cover our hosting fees. So please consider chucking a few digital pennies our way by clicking on this link. Thanks!