It's been 10 years and yet an Apprentice has still not managed to get the coveted Christmas No. 1. To improve his chances, Lord Sugar has widened the pool to 20 prospective "partners", thereby giving me 20 chances to swear at the TV on a Wednesday evening.


So what happened in episode 1?

There's 20 briefcase wankers this year and there's no way I can be bothered to learn all of their names. There's a woman who looks like Joely Richardson and a man who looks like Ben Kingsley. One man is not wearing any socks. There is Steven who is a social worker and whom my nan would describe as very "festive". We also meet Felipe, an unashamed third-person-bigger-upper which makes him an early favourite.
The task

It's "selling", because what else? It's exactly what the bank makes you do when you go in for a business loan.

But first – the teams need a name. The gents go for typically masculine names that are barely disguised nicknames for their penises – Viper, Thor's Hammer, Wang-Corp... Eventually they decide on "Summit". Could they not think of summit better? (I know, right?)

The girls settle on Decadence, which makes them sound like a lap-dancing club. The feminist cause is set back another 100 years when Project Manager Sarah (Joely Richardson) decides all her team members must wear short skirts on the task tomorrow and I want to twist my ovaries up in despair. 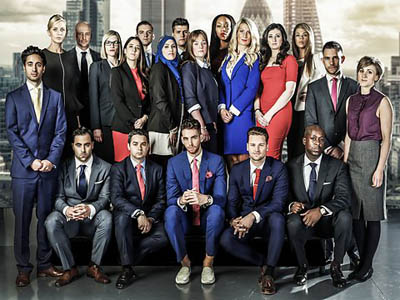 Wasn't kidding about the no-socks thing.


The teams are given a pile of junk and the impossible task of selling it all in a few hours because business is that easy, folks. Sarah has a brainwave of selling chopped lemons to make more money, which is only slightly better than ordering her girls out on to the streets to suck strangers off.

Sockless Wanker sums up everything he learnt at business school – "If you add value, you can sell it for more" – and practically guarantees his new position at Amstrad, marching into Whole Foods to buy overpriced guacamole to smear onto some hotdogs. Felipe starts to get a sweat on, and wonders if Felipe has bought enough cheese for the hotdogs. I have a feeling this may come into play later on. I Camembert the tension.

There's an awful lot of running around in shiny suits and some talk of potatoes. Ella Jade with the sad eyes manages to barter up 10p for a sack of spuds, and Sassy Steven is pouting that no one wants to go the famous "mashed potato shop" in London. Sarah claims she can "sell ice to Eskimos", but fails to sell toilet brushes to the penguins at London Zoo, and wonders whether she can chop up potatoes into smaller bits and sell them instead.

The girls get the slight edge over the boys, but are told by Lord Sugar that Decadence is a shit name, so it's back to the drawing board. Their treat is some warm Cava up the London Eye, a trip that costs the princely sum of £29.50. They are really pushing the boat out this year.
Who got fired?

Felipe is sad Felipe has failed the first task, but manages to survive Lord Sugar's finger, as does Sockless Wanker. In the end, Chiles (Ben Kingsley) gets the chop and I didn't even get to make fun of his name.