The Apprentice: season 10, episode 11 recap: "Taking it to the Next Corporate Level"

I have heard that the Google recruitment process is made up of eight different interviews, in one of which the candidate is lead into an empty room and someone leaps out from behind a curtain, to gauge how they deal with stress. Faced with this, I think I would strike out and kill the person from behind the curtain with a blow to the oesophagus, and then presumably Google would immediately make me CEO, or something.

Yup, it's that part of The Apprentice when people nervously rethink their LinkedIn profile and wonder whether their employer is ever going to double-check that 100m swimming badge that they never actually got. It's interview week!

The remaining five candidates are put through four different interviews with various scoundrels Alan Sugar has picked up – there's Claudine, who does something in HR, Michael Soutar, and Claude. Good ol' Claude. Why we were denied the chance to see him rip apart Dapper James is something I will lament till the day I die.

Interestingly, the guy with the nice eyes who looks a bit like Noel Edmonds has been dropped in favour of 2012's winner, Ricky Martin, who's brought along his own green highlighter and still looks like that bloke from Erasure.

The first lie uncovered is Mike challenging Danyewl over his claims he was salesman of the year. Danyewl mentions something about hot tubs and my loud groans of exasperation drown out whatever happens next. Mike questions the other claims on Danyewl's CV but Dan refuses to admit he's exaggerated: "Even I envy me" (Little joke for you Spinal Tap fans out there).

Roisin starts to stumble at the first hurdle when Ricky challenges why an accountant would want to start a healthy, low-carb ready meal business. Green highlighter poised, he attempts a withering dismissal. "Lord Sugar's not looking for a new accountant," he sneers, making Roisin go a bit wet-eyed. That may be true, Ricky, but I doubt Sugar was also looking for an Andy Bell tribute act, and yet here we are.

Next up it's Bianca and Claude. Ah, Claude, the gentleman thug. He'll bop you on the nose and then take you out for crumpets. Bianca's business plan is something to do with coloured tights and shape wear, and it's one of those ideas that make you ask why hasn't someone else already thought of this? Claude immediately dismisses it, but that maybe because his girdle has been causing him gyp.

Mark tries to pitch his digital business idea that's something about the global hyper mega-net to Ricky, who then forces the Aussie into an elaborate role-play. Mark has to pretend to cold-call Ricky but it quickly becomes disturbing: after they exchange pleasantries about seeing each other at the country club and tell cute stories about their fake families, Ricky accuses Mark of sleeping with his imaginary wife at the Christmas party and is going to put the phone down on him because he's about to crash his fake-jet into the side of a mountain; try selling me advertising now, Mark!

The previously unbeatable Roisin is starting to unravel and admits to Claudine her experience of working in the food industry basically comes down to the fact she eats food once in a while. Her market research is essentially six people she stopped outside a supermarket and her friends and family, which is the same as someone going into stand-up because more than one person laughed at a joke they told in the pub once. Oh Roisin, I thought better of you.

Her final undoing comes against Mike, who says her idea of putting some kind of Play-Doh into ready meals instead of pasta isn't as unique as she claims and he promptly parades a variety of identical products already available in shops to prove that very point. Roisin is visibly defeated, and I can only speculate the reason why they didn't let Claude play the trump card is because he has already eaten enough souls that day – too many and he becomes dangerously powerful.

Like a naughty schoolboy being summoned to the Headmaster's office, Solomon readies himself for a lashing from Claude. Except – shock horror – Claude is actually being quite kind. Is Solomon, the enthusiastic little poppet the man to finally tame him? No. There's a brief tense pause and then Claude unleashes the beast; Solomon's business plan is only eight pages long and looks like it's been written in crayon: with his blood pressure about to go through the roof, Claude grabs the nearest heavy object to hurl at Solomon and it's like being in the trailer for Whiplash. My nerves are shredded and I know I'm going to have nightmares about Claude's biting "You're pathetic" for weeks. 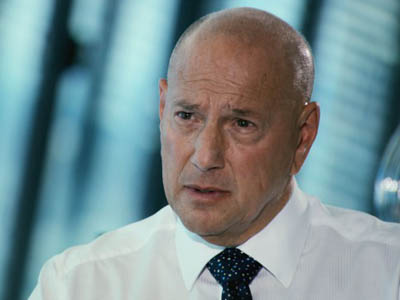 "I will eat your young."


Elsewhere, Danyewl is laying it on thick with Claudine, talking about his journey and finding the hero inside himself. If you look closely, you can actually see his beard growing with every passing minute; by the time he leaves the interview he looks like Tom Hanks in Cast Away.

Claudine appears to be doing a psych evaluation on the candidates without any of them realising; very subtly she picks apart Bianca's professional veneer, telling her she's "wearing a mask" and starts reaching for the ink blot cards. By the time Bianca reaches Ricky, she's so shaken up she breaks down in her interview. He cheers her up by singing "A Little Respect" and she manages to pull it back together and it's clear now that Bianca is just amazing, and I'm gutted I never noticed it before.

By now, I've shredded every cushion I own and am frantically looking for something to hold on to when it's Mark's turn to get both barrels from Claude. You can see it coming like a storm over the horizon: Claude narrows his eyes and goes the full R.Lee Ermey: "You worthless piece of scum, I hate you and you SMELL!" Except he doesn't. My own fear has filled in the blanks and he's actually SMILING at Mark, commending him on his answer. I can't hear the rest because I'm dry-heaving in the corner.

A wonderful thought then occurs – now that Nick's leaving, what if they replace him with Claude? The thought of him scowling the in background, mouthing "I'm going to fuck you up, sunshine" when a batch of soufflés fail to rise in cooking week suddenly makes all the bad thoughts go away.

Whilst the candidates go for a lie-down and a bottle of gin, the Rottweilers pitch for their favourite candidates – why couldn't they have been this nice at the time?! Claude and Lord Sugar seem particularly enamoured with Bianca's tights ideas and start swapping fan fiction they've found online. Mike is a little too pleased with himself for debunking Roisin's claims, presumably wondering what her ears would look like on a string around his neck. However, they all agree what a lovely person she is, so that's all right then.
Who got fired?

The candidates are called back and have to pitch their ideas AGAIN! With Bianca's hosiery still on his mind, Lord Sugar quickly fires Solomon for taking up space in the boardroom. There's little time to mourn before Sugar puts the gun-sights on Roisin, who feebly tries to cling on by bringing up her market research again – you know, the one that had all of six people in it. I give her props for trying but it's not enough, and she's despatched to the Taxi Cab of Despair.

There's still one more person to offload. Bianca's nodding furiously and Mark's hoping no one brings up Choke-gate again. Danyewl's beard has grown so much he looks like Cousin Itt and is still bleating on about those fucking hot tubs. If you love them so much, Danyewl, why don't you go and marry one?

It's "with regret" that Sugar decides to get rid of Danyewl, whose cab takes him to the nearest hot tub shop so he can fill one full with his salty tears.

So that's that. It's Mark and Bianca in the final, where they get to put into practice everything they have learned over the past 11 weeks, or rather demonstrate they also have party planning skills and pray that Danyewl doesn't fuck it up again. But we get to see Stephen again, so yay!