I know two weeks is a long time to wait for a recap, but it's taken this long for the police to cut through the chains tying me to the railings outside Lord Sugar's house, where I turned up on Sunday 21st in protest. Let's just say some things were yelled, some slogans were daubed in biohazardous material, but in the end no one got hurt. By now you should all know who won, and I AM NOT HAPPY ABOUT IT. Nevertheless, let's recap the night as it happened and see if anything I say will stand up in court.

Already I'm disappointed with Bianca – she gets the phone call from Frances to meet Lord Sugar at Bloomsbury Ballroom and she doesn't tell Mark to go to a completely different venue. For the finale the two remaining candidates must host a launch party for their business idea, including a presentation and promotional video, which once again just proves my earlier point about how the entire series up till now has just been watching people jump through hoops. What is this? Some kind of entertainment programme?

The previously fired contestants are brought back to work on Mark and Bianca's campaigns, and I don't know why everyone is talking about this bringing back memories of being picked last for PE, because I was always picked first for team sports. Unless I was on my period. Sadly, Stephen has not returned but at least I recognise at least half of them. The finalists take turns to pick until Sarah (Joely Richardson) is picked last and I in no way sympathise with her at all hahahahahaha looks who's last now, blondie!

Danyewl is still sharpening his knives for revenge against Mark: could tonight's final end in a hot-tub blood bath? Bianca talks through her tights idea and is keen to sell them at £35 a pair. My left eye starts to twitch – please say she's not serious. Who's going to wear them, Elton John? Felipe tries to pitch True Skin as the name of the product, because it is so very "sesss-ual", and reveals he wears tights under his suit because they make him feel like a Fat Daddy. 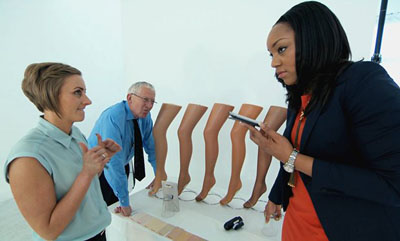 Fairly certain that about 30 seconds after this was taken, it became obvious why Nick Hewer had to leave.


On the other team, Mark is trying to explain his digital marketing idea; every one nods but still look a bit blank. Solomon totally gets it and thinks he should call the company Splash or Sponge. Mark slowly realises he's made a terrible mistake picking Solomon for his team.

Both teams carry out a spot of market research, although I would argue that if you're a day away from launch this is probably something you should have carried out earlier. Bianca is set on charging an extortionate amount for her tights and has completely ignored the key demographic of bank robbers from 80s films – that skin match technology could revolutionise the industry. Mark's team find a guy who runs a make-up school who pays £3000 A MONTH on digital marketing, so clearly I'm in the wrong business; I should just be knocking on people's doors talking about digital enterprise, SEOs, Twittering and facespace.

It's Day 2, and Bianca reveals the packaging for her magical tights. It looks like something you would pull out of the bargain big in Wilkinson's, missing only some dirty sellotape and superficial damage. She gets some unwelcome news whilst shooting her video with some bored-looking models that her team think the price is too high. She says she'll think about it and my eye-twitch gets worse; please don't self-sabotage this, Bianca.

Hopefully Mark will fall apart at his own undoing; his company is called ClimbOnline, so he's gone with the amazingly creative idea to film at a climbing wall. The actors are dressed as various people from the service industry, so there's a builder, a dentist and what I think is a dog walker clinging to a wall, nervously shouting their lines over their shoulders. It's a shame they didn't have a little Jack Russell being winched up alongside the dog walker, yapping in approval at ClimbOnline's low, low rates of service. I'd have signed up immediately.

During editing, Sanjay cuts together a moving montage of Mark nodding, which moves Mark to tears. Sarah, desperate to get some more screen time, just starts saying whatever comes into her head and claims the logo makes her think the company's called "Klimbbonleen". Mark pats her quietly on the head and goes back to hugging Sanjay.

Over in the Team Tights editing suite, Bianca makes it quite clear she doesn't give a shit about anyone else's opinions, so Lauren starts to shine up the sword Bianca is about to fall on, maintaining direct eye contact with Nick to show she thinks Bianca is making a huge error. This damn eye-twitch of mine refuses to stop.

It's now Day 3, and Mark is haunted by memories of him choking. Everyone tries to help by reminding him not to choke, just breathe and not choke and do anything but choke out there. Whilst he's hyperventilating he gives Solomon and Dapper James the task of providing the pre-pitch entertainment. Their idea is to dress up in full-body condom suits and mime climbing a ladder. Hello? Is that Sadler's Wells? I've got a new concept for you...

Lauren gives it one last go to try and convince Bianca to drop the price but she refutes her. By this point, my left eye is clamped shut. 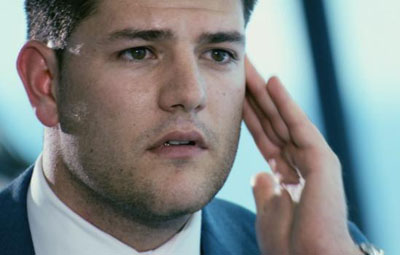 "Well tonight thank God it's them, INSTEAAAAD OF YOOOOUUU..."


Her pitch starts modestly with "This Girl Is On Fire", and the bored models return to stomp moodily around the guests. It's more than clear Bianca is ridiculously passionate about her tights, and as long as she lives no woman will ever have to wear the wrong coloured tights again. It's all going so well until she drops the price bomb: she's dropped it from £35 to £20. Everyone agrees it's a bit steep, and someone else points out she would have to manufacture over 200 different shades, which is also a bit steep. You've got to hand it to Bianca, she doesn't falter and stands firm. The tights are going to retail at £400 and she's going to go one better and make five thousand different shades! Take that, Sugar!

Mark's pitch begins with Solomon and James solemnly describing why the condom men are dancing like they've got a stabbing pain up their bums they're trying to run away from. It's something to do with getting on a digital ladder apparently. Mark starts to cough. His video plays and despite Sanjay's nodding montage it looks a little like a school project. He coughs a little more – is he going to choke?

No. It all goes quite smoothly despite the car crash of the first five minutes, until he ends with his bizarre analogy of "Let me be your front door". The front door to a digital ladder? Lord Sugar looks confused.

Judgement day is finally upon us. This is what we've been building to for three long, long months. Everyone troops back and Lord Sugar makes one final dig about Felipe buying that paper skeleton, ah ha ha ha. Ha. He flips through Bianca's tights samples, failing to notice a few have made it into Nick's pocket. He ponders why Bianca doesn't go for a broader market but he's just drawing out the conclusion to toy with us. Little is said on Mark's digital thing, other than the condom men.

Both finalists make their final pleas: Bianca wants us to live in a world where women can walk around with warm legs and Mark reckons he's just going to beat potential customers into submission. He then plays his ultimate dick move by dismissing Bianca's idea as being "niche" because it's just for women and the police are called because my neighbours can hear screaming.

And so begins Alan's final dance of the macabre, swaying one way and then the other and giving nothing away. On one hand, he's a product man, always has, always will be (despite mainly making money from property) but maybe he should take a gamble with Mark and SHUT UP ALAN JUST TELL US WHO'S WON.
Who got hired?

Mark. Mark won because Lord Sugar is a big stupid head and can't see that with a bit of hand-holding, Bianca's idea actually has legs.

My psychiatrist tells me it's time to stop now because it's time for art therapy, so I'm going to leave it there and not go into another rant about exactly why Lord Sugar was wrong and Mark was the biggest cunt to walk this earth (mainly because Lord Sugar's lawyers took all my threats very seriously). Mark won, Bianca didn't and we can all go back to our lives.

Did I ever tell you how much I dislike Rita Ora? When does The Voice start again?