The Apprentice: season 10, episode 5 recap: "The Road to Hell"

Thankfully this week's episode was much less dramatic. Following the sucker punch that was last week's triple firing, I don't think my heart could have taken it. However, it did mean we got the worst. Episode. Ever.


There's a game I like to play when I'm watching TV called "I've been there!", where I shout "I've been there!" whenever I see any place I've been to. Imagine my excitement when I saw the candidates assemble at the services of Junction 23 on the M25. So glamorous!

Standing on the tarmac, I'm hoping they'll have to run rival motorway cafes. Team Tenacity would run a gastro-hipster joint serving tea out of jam jars and Summit would open a Ginster's drive-thru. Lord Sugar has other ideas and instead it's Coach Tours week!

This should be good. It is not. For a good half an hour we just see people in the back of taxis talking about ticket prices. Everyone keeps on mentioning that there are 25 seats on a coach and I can't help but think this will be significant later on.

Danyewl, pub quiz extraordinaire, pushes to be PM of Team Tenacity and no one has the energy to stop the inevitable car crash, or should that be coach crash? He reckons tourists will pay £99.50 for a tour of the service stations of the M25 and a stale sandwich. Pamela and her sub-team march around Blenheim Palace and Aussie Mark manages to get a good deal on entry tickets; apparently this is what makes for prime-time TV. 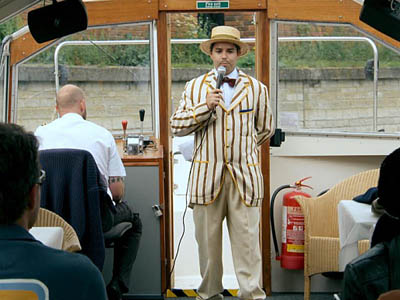 You can't help but think this would get him shot in Colombia.


Team Tenacity lay siege to Hever Castle, home to Anne Boleyn, whom James reckons would "totally be up for it". He manages to annoy everyone within a five-mile radius and his very existence makes a good argument for bringing back public executions.

Deals done, the tours start. Team Tenacity's goes quite well, which always makes for boring viewing. Who wants to see competence on The Apprentice? James appoints himself the King of the Coach and acts like the annoying show-off on every school trip, forcing people into sing-songs and telling everyone to give the toilets five minutes because he's absolutely wrecked them. LOL. If I were the coach driver I would have swerved off the side of the closest bridge to end it all.

Barely able to keep my eyes open, I force myself to watch until the end. Somehow Tenacity win because they had a bigger mark-up on their sandwiches and Summit spunked all their cash on stupid costumes. Having spent all the treat budget sending 30 people to Iceland last week, the winning team are treated to a Costa coffee and a go on the arcades at any service station within the M25.
Who got fired?

Despite James acting like a twat for the whole task, Sanjay brings back Bianca and lovely Jemma with the lovely hair who always sounds like she's on the brink of crying.

Lord Sugar does his usual dance around the houses before deciding Jemma's too nice for the competition and jabs her with the finger of fear and I want to cry with relief that it's all over. Next week they have to design a board game, which is an obvious business skill, isn't it?