Remember when Wednesdays were fun? When you could do as you wanted and not be a slave to the corporate machine? I miss those days.

Last week we were introduced to James' Big Dawg (not his cock) and Danyewl's Love Water. This week promised fighting, sniping and errr, jousting. I guess that's one way to settle a difference of opinion but I can't see it as the new Carnegie Method, to be honest.

The candidates are called to Lord Sugar's country pile, where he greets them wearing bunny slippers and a short dragon-print silk kimono. This week he has set them a series of fiendish tasks, each more devilish than the last, in the most depraved place in existence: the Royal Bath and West Show.

This week, the Apprenti (is that the correct plural?) must pick assorted products and pressurise the good people of Somerset into parting with their hard-earned cash. It's Country Fayre Week!

Team Tenacity begrudgingly make Felipe Project Manager, as if Fat Daddy never happened. James, whose shocking pink tie and pocket square make him look like he's off to Dapper Laughs' wedding, puts his balls on the line (his words, not mine) and Summit are beaten into submission by his bants into having him as PM.

The teams choose their products: the options are foldable wellies, bags made out of hats, and other stuff that wouldn't make the Innovations catalogue. Mark and Felipe go for the softly, softly approach when negotiating on price, ie they completely forget, and Mark claims to be a single man despite claiming last week he puts his pole in the ground whenever he can. James listens intently to the products his team have researched, and then ignores them completely. Somewhere in the distance, a bell starts tolling.

And so it's off to England's premiere rural event: Danyewl displays his usual course of subtlety when trying to pitch to sell the big ticket products, by mounting one of the vendors and screaming "But I've got passion!" over and over again. Both teams end up wanting to sell the hot tubs, and James loses out because he calls the guy Derek, when his name is Anthony. "If that's his attitude about what matters to him – a name – then sod him," says James, because there's nothing worse than people insisting you call them by their name and not one you've just made up. In an inspired executive decision that will probably in no way be relevant later, James decides not to tell his team in case it affects their morale, and instead chooses to lie and say he picked lawnmowers instead. Bless him, he's always thinking about other people. 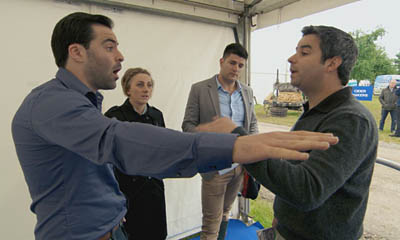 Rap battles: an increasingly useful tool for conflict resolution in the workplace.


As is becoming increasingly clear, Mark is a bit of a bully, and manages to persuade (read: pressurise) poor Felipe into letting him sell the hot tubs over Danyewl, and promises he won't take Felipe's lunch money this week. Danyewl does not take this news well, and we do not hear the end of it for the next half an hour. Mark gets busy charming the Milfs of Bath and manages a major coup by selling seven hot tubs in one fell swoop. Somerset is increasingly looking like an awesome place to live.

Meanwhile, James and Roisin, both rocking the "business country casual" look (Next clothing tucked into wellington boots), stand forlornly as people get on and off their lawnmowers, refusing to buy any. By mid-afternoon, Roisin's managed to flog one by promising the buyer her first-born child and now it's anyone's game. Not really, Mark's got this in the bag.

Unsurprisingly, Team Tenacity take the prize, and selling seven hot tubs means they come out of the boardroom unscathed, although Danyewl is still sulking and probably forever will be. Their treat is a disco dancing class with Christopher Biggins.

James continues to out-and-out lie and claim that he didn't want the hot tubs, and that his game plan was to flog lawnmowers all along. Roisin looks like she's about to burst under the strain of keeping James' secret and it all comes out how he got the guy's name wrong. Unable to talk himself out of this one, James just digs himself a bigger hole, "I didn't lie, I just didn't tell you. It was Derek's fault really. Anthony! I mean, Anthony's fault, Lord Booger. I mean Sugar!"
Who got fired?

James brings his former best mate Sanjay and that double-crossing Roisin back in with him for the final judgement, and launches into his redemption speech. "I'm in this big wide world on my own. Sometimes businessmen make mistakes. I need you to give me direction, Lord Sugar," etc etc.

Sugar is unimpressed and gives James the boot, meaning we are cruelly denied the bloodbath that would have been James going up against Claude.