I noticed the other day that A Question of Sport is still on TV. Literally still being broadcast on televisions. So as much as I would've been delighted if The Apprentice had been cancelled this year, I suppose it's understandable it's further down the list.

The gang head off to get their task from Lord Sugar, who isn't there. He appears instead as an augmented reality character on the front of a comic, presumably having been too busy tweeting this during the World Cup: 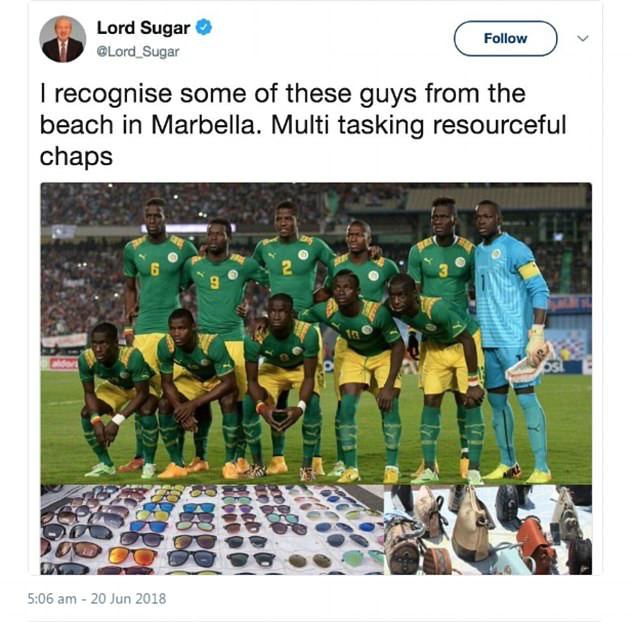 Sugar, who tweeted this during the World Cup,

tells them, in the barely-awake monotone of a man in his dressing gown reading aloud something he's just been emailed under the assurance that doing so means he won't have to come in today, that they must design and pitch a comic. It will need an AR thing on the cover and, I don't know, a free snake or something. He puts this strenuous business to an end and rings off, before resuming his plans to tweet this during the World Cup:

David, an accountant, who seems nice, writes stories sometimes so wants to be PM, but Frank, a man with a haircut, says "stop messing about and let me lead the team", and they actually do. On the girls' team Khadija volunteers because no one else wants it, which you admire until it becomes apparent that her management style amounts to shouting what's going to happen and then saying "Everyone happy?" No, since you ask, I have a low sense of self-worth and I'm worried about these dreams I keep having where it feels like I'm falling. Oh, you didn't want me to ... right, no, right, got it.

The boys do a space comic about a boy in space who does space things, and though I'm always the first to argue that the process (set tasks for which they're unqualified in an unrealistic timeframe, act surprised when it goes to shit) is more flawed than the contestants, they couldn't have been less creative if they'd actively destroyed something by hitting it with bin-lids. As always, the teams go off to what we're told are award-winning design studios and then make zero use of those studios' expertise, making you wonder why they didn't just do it in the park.

The girls go with the catchier "MC Go Johnny Go Go Go Go" as their title character, mainly because Khadija has shouted it, and then set about dismantling a premise that has at least some merit – a rapper who travels the world learning languages – by not including any examples of the issue's chosen language. I lose track of who is responsible for what, mainly because this is the first one I've seen this year and I don't know their names, plus we're still at that early stage when there are about six anonymous men with stubble who just sort of hang about in the background not saying anything, but there is a failure on the girls' part to follow through on the concept fully and a failure on the boys' to actually produce a comic that a human would do anything other than swat a bee with.

When they pitch, Khadija simply railroads the buyers' criticisms by saying they aren't true, and Kurran, filling this year's "Overconfident Telesales Manager with Slightly Eccentric Taste in Suits" slot, has agitated to lead a pitch because he feels it would be a grave error to leave him out, but dries up and forgets his PM's name. This being the era when video evidence of you doing something is no obstacle to your blithely insisting you didn't, of course, he later insists he was amazing.
The boardroom

When he enters the boardroom it's the first time so far we've seen Lord Sugar, the supposed face of the show, who also tweeted this during the World Cup,

on screen and we're about 40 minutes in. It might be that they're trying to reduce his screen time because he tweeted this during the World Cup:

He does a joke about Khadija being like a dictator. ("You were making a comic, not invading Poland": steady Alan.) Sabrina, who has been in her firing line the most, goes after her, saying she belittled and condescended rather than managed. Khadija comes back at her a bit, but to her credit ultimately says she'll take it on board.

I've asked here before why it is that, given these people have been successful, and so will have observed how peremptory management styles don't actually work, they then employ them on The Apprentice anyway. In Khadija's defence the situations where we see her barking orders are probably at the end of 10 minutes' unbroadcast discussion which goes nowhere because everyone's trying to best each other, not contribute. It is a flawed process, designed only to produce conflict, and has somehow got away with 14 years of this because of a public desire to witness arguments. I would argue that the normalising of aggressive conflict by reality shows has contributed to a national discourse in which winning the argument is thought more necessary than having a valid point. Yes, it's basically why we're leaving the EU. No one ever backs down. Lord Sugar didn't, only managing a reluctant and insincere apology after he tweeted this during the World Cup:

Anyway, the girls win easily.
Who got fired?

David is nice and normal and in the boardroom makes reasonable arguments as to why the task failed, taking on board his own failings but pointing out, without attacking them, how others' contributions weren't up to par either. You know, like a person would. He is of course fired because where's the fun in that.
Did he thank him?

Yes: a classic "under the breath while getting up" thanks. Good to see an outing for it this early on.

Next week: the teams go on LBC and shout at each other for three hours about whether Christians should have to bake gay cakes.