The death of Peggy Mitchell and "real" London

If Eastenders were realistic, there'd be no Peggy Mitchells. Hers is a London where a pub landlady can return after six years and be greeted warmly in the street by tens of people still living there, all bound together by family ties and regular community events, rather than vaguely recognising each other as the person they used to be on the same daily train commute with and avoiding eye contact. But that's not the point.


Like most soaps, Eastenders represents a Britain that Nigel Farage imagines existed right up until we joined the Common Market in 1973, and one we supposedly all long for. Everybody stays in the street they were born in, the exotic is thought suspicious and those who imagine a life elsewhere are flighty and unreliable. Even when conducting extramarital affairs people only sneak away two doors down to provide the cover of secrecy. They get jobs on the market or in the pub for which they are obviously overqualified or inexperienced, because the prospect of travelling three stops on the Tube twice a day is unthinkable.

These choices are made for narrative purposes, obviously, because it'd be crap if all the characters weren't around Albert Square during the day because they worked elsewhere (Bradley Branning, an exception who worked in the City, was roundly treated as some sort of shaman for doing so), or went off to university in Hull for three years and were seen only in the holidays, unable to fully participate in any storylines. But they also serve to present an idea of community in which a figure like Peggy Mitchell makes absolute sense. 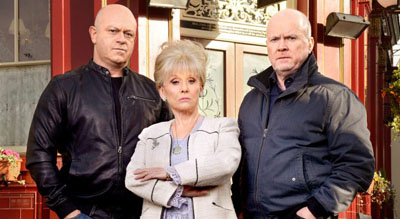 Like most proud Englishmen, I long for a Britain when mothers and their violent sons would stand and glare at passers-by in the street.


The soap pub is a construct of convenience: you need somewhere a lot of characters can be at once and would logically gather and converse, and in modern Britain that doesn't really exist. Communities in London are small, disparate, erected and collapsed as quickly as you leave a job and don't drink with your old colleagues on a Friday anymore, or your Sunday five-a-side team gives up the ghost because everyone has kids now. If the soap pub was simply run as most are in real life – by a series of rotating Australian bar staff you sort of recognise if you've been in more than five times and might even end up on nodding terms with – there'd be a missed opportunity to mythologise its status as a community beacon, so it needs to be run by someone who can step up to iconic classification. Like Danny Dyer.

Or Barbara Windsor, about as British an icon as you'll find, being a romantic totem of the Krays-era climb out of post-war austerity and later the champagne-and-cigars swinging London of the early 1960s. She was always perfect casting for what Eastenders strives to project: "real" London. This is largely a sentimental construct, much like the increasingly irrelevant idea that foreign-owned and comprised Premier League teams need a "British spine" of players to retain a local connection to the club, no matter that the fans are happy enough if everyone's Mexican as long as they win. But it's fair to say that Eastenders should at least attempt to maintain a tie with its setting's roots, even if in real life it would be populated entirely by hedge fund managers there for the school catchment area and quick journey into Liverpool Street, who never set foot in their local pub.

I didn't enjoy Peggy's last episode much: it ended abruptly, missed an opportunity for a satisfying tie-up by having her trick Phil and Grant far too easily into thinking she didn't have enough pills to do herself in, and didn't feature Ronnie or Roxy, always the best Mitchells, at all. 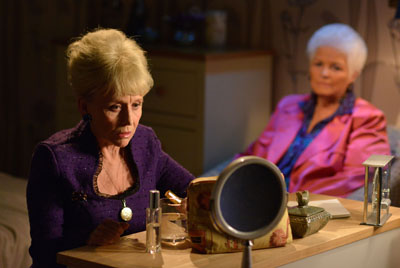 Also Pat Butcher was in it as a Force Ghost.


Much better was Friday's walk down memory lane as she and Phil took a tour around London in scenes that felt natural and semi-improvised. The transplanting of the action away from Albert Square removed the context of soap's anti-realism and gave it the air of two friends saying goodbye. You got a sense that this was a farewell to Windsor as well as Peggy, the streets they walked down looking like the Bethnal Green terraces where she grew up. ("Real" London, if you like.) Her accidental "knockers" joke was a pure Carry-On nod, nothing like Peggy.

Strong women are a consistent feature of soaps and have agency rarely seen in other forms of drama. They don't just react to treatment by men or act as foils; they instigate storylines and dominate them. While Peggy's final episode sold the character a little short, the framing of it didn't: the build-up, strategic spoilers in the press and iPlayer exclusive "Last Orders" content did her proud, leaving you in no doubt that this was significant, and that Eastenders remains culturally so. Even if it is out of step and unrepresentative of modern London, its most iconic characters transcend it, and can still make a mark on the public consciousness.

More:  Eastenders  Barbara Windsor  Ross Kemp  Steve McFadden
Follow us on Twitter @The_Shiznit for more fun features, film reviews and occasional commentary on what the best type of crisps are.
We are using Patreon to cover our hosting fees. So please consider chucking a few digital pennies our way by clicking on this link. Thanks!