Last week I went to a screening of Orange is the New Black season two's first episode. It was predictably great, as I'll outline in a review soon once I've deciphered the notes I made on a torn-up bit of an Ibuprofen packet having forgotten to bring a notepad. #journalism But the real joy of it was the Q&A featuring Jason Biggs.


For Jason Biggs, I have discovered, is the greatest of all the humans. Along with Taylor Schilling, Laura Prepon and Danielle Brooks, he answered 20 minutes' worth of questions afterwards (which didn't include the pretentious one about feminism I had ready to go until I realised how out of place it would be amongst the series of variations on "How much are you like your character?") and was brilliantly deadpan throughout.
On Larry's role in season two

"
"
I can't give too much away, but I guess after Larry dies in the third episode ...
On director Michael Trim

"
"
PREPON: For the pilot episode, our director, Michael Trim, was amazing. 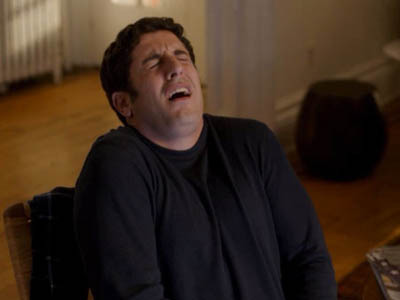 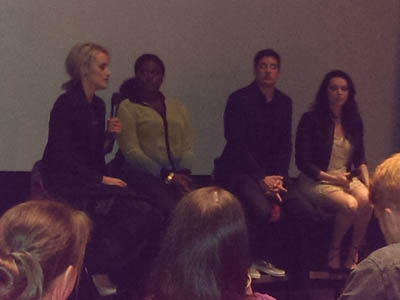 He even has eyes that shoot lasers.

"
"
Watching people pass microphones to each other. Always my favourite part of any evening.
On research for the part

"
"
I framed my wife. She's currently serving 15 months for embezzlement. And I draw a lot from that. I think she's going to want a divorce afterwards, but for now she's my wife, she's in there, I'm going to stand by her. As far as I know she ain't getting any in there, I'm not quite sure. 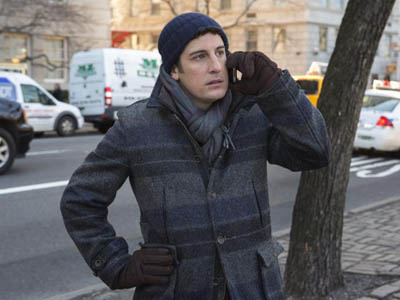 On his American Pie castmates' reaction to the show

"
"
I've spoken to some of my American Pie castmates and I haven't heard bad things from anybody. Literally everyone likes the show. They're really jealous of me, and that's what it's all about: making other actors around you feel jealous. It's a very competitive industry.
On working with Jodie Foster

"
"
I masturbated in front of her. I masturbacted. And masturbated.
Arguably, the laudable intentions of my planned question about feminism are coloured by my having focused here on the only male cast member present at a Q&A to promote a female-led show. It was a really good question, I promise, and barely included anything about their underwear. I can only apologise. Season two hits Netflix on Friday.

More:  Orange Is The New Black  Jason Biggs  Taylor Schilling  Laura Prepon  Danielle Brooks  Netflix
Follow us on Twitter @The_Shiznit for more fun features, film reviews and occasional commentary on what the best type of crisps are.
We are using Patreon to cover our hosting fees. So please consider chucking a few digital pennies our way by clicking on this link. Thanks!