"Come for the cynicism... stay for the subversion!" promises industry analyst Nikki Finke ahead of her Emmy Awards liveblog - or "live-snark". You want subversion? You want the evening turned on its head? You've got it: Finke posted a picture of host Neil Patrick Harris UPSIDE DOWN. Take that! More depressingly awful put-downs after the jump.


If you want a decent understanding of the inner workings of Hollywood, then Nikki Finke's blog, Deadline.com, is a good place to start. Go there, read a couple of her self-congratulatory posts on box-office predictions and catty industry inside jokes, then vow to never go back. Finke is one of the worst type of people in Hollywood: so incredibly egocentric and vain, she'd literally cease to exist if she ever stopped writing about herself (the irony being that if she did ever disappear into the ether, she'd still have to rematerialise to say "TOLDJA!").

Finke is currently on a 19-week vacation following a feud with her boss, Jay Penske, who acquired Deadline.com in 2009 and Variety last October, and had the gall to not offer Nikki a job. Nonetheless, Finke still files her Sunday box-office reports ("This place would fall apart without me!" she probably says, as she's writing) and she couldn't resist returning to her keyboard to eviscerate the Emmys, like a female, semi-respectable, equally vulgar Perez Hilton. "Warning! Not for the easily offended or the ridiculously naïve!" begins the veritable snarkfest. Hold on to your sides...

Finke is apparently no fan of host Neil Patrick Harris. "Yawn," she writes, in italics to emphasise her devastating and original put-down. "Pathetic, isn't it, that only one guy in Hollywood is funny at awards time – and he's not even a writer? It's lame. If this is the high point of tonight, then this live-snark will be a live-suicide." One can only hope.

But then, after Harris makes a joke about Jimmy Fallon's tap-dancing being "far too gay", Finke shoots herself in the foot:

"
"
"Not 15 minutes gone and already pornography and homosexuality mentioned... I've said it before and I'll say it again: No wonder half of America hates Hollywood."
Yes, those twin pillars of hate: people fucking and gay guys. Also, saying "half of America" hates something is not an insult, because that implies the opposite is also true. You dolt.

"
"
"[Long sigh] Someone get him back on drugs or alcohol or both."
Yeah, fuck that former drug addict and alcoholic! He hasn't made any decent films in ages so he deserves everything he gets! Side note: anyone who writes [sigh] or (*rolls eyes*) or any other passive-aggressive text substitute for being disinterested can honestly go and get fucked.

Another area in which Nikki Finke excels is needlessly ragging on young female artists. Thus, she uses Julia Louis-Dreyfus' win for Veep as a platform to spew her hatred at the likes of Lena Dunham, a talented actress so young and hip, she must look at Finke with puzzled indifference, much like a bored young student would stare at a trilobite on a field trip. 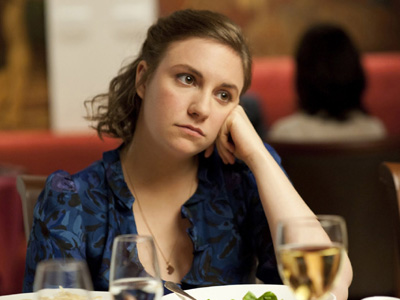 "
"
"The only good thing about Louis-Dreyfus winning is that horrid Lena Dunham didn't for a show that not only isn't a comedy but isn't even a dramedy. It's just needless nudity."
Whatever, Grandma. Note also the sly dig at Louis-Dreyfus, a comedian who has been crushing it for over 30 years but doesn't even get as much as a "well done". There's no room for congratulations in a "live-snark"!

There is, however, plenty of room for fat jokes. 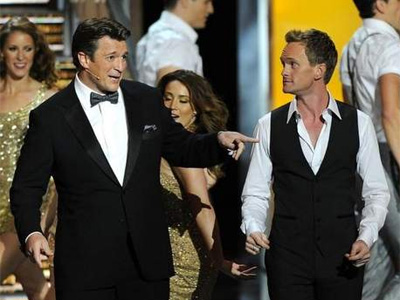 And what does Nikki Finke look like? Oh, that's right, she's a notorious hermit who doesn't allow photographs of herself to be released because she prefers to "live-snark" people from behind a veil of anonymity. That sound you can hear is the pot calling the kettle fat.

"
"
"I don't get Mindy Kaling. Why is TV filled with so many unfunny funnywomen?"
The Mindy Project is probably the funniest show on US TV right now. Nikki Finke's idea of comedy is a picture of Neil Patrick Harris that has been turned upside down. The answer to her question is in there somewhere. 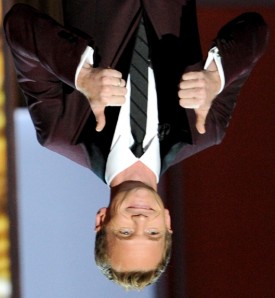 So now his thumbs are pointing... down? Finke, you've done it again!

The night's biggest surprise was the fact that Bryan Cranston didn't win Best Actor, and neither did Jon Hamm or Damian Lewis or Hugh Bonneville. It was a moment that was crying out for a TOLDJA that never came. Finke had her own theories about Jeff Daniels' win for The Newsroom.

"
"
"The fix was in for Jeff Daniels to win on a treacly show that few people watch and most of Hollywood hates. Either HBO paid off every final Emmy jurist. Or else Aaron Sorkin blew them."
Everyone I know loves The Newsroom, and though I'd never speak on behalf of Hollywood like Nikki, I was under the understanding that it was well liked. And come on, lady: everyone knows Aaron Sorkin wouldn't have to blow anybody - he'd be way more efficient at talking you off. He could probably bring me to orgasm by reciting Jed Bartlet.

"
"
"My spies in the auditorium tell me everybody is frustratingly restless and furiously texting. This show needs a filter from Instagram."
Isn't it cute when old people try to talk about technology? It's like when my Mum tells me she listens to music on her "iTunes player". Boop!

The night is over and Finke is ready to return to her hiatus, to disappear into the mists of anonymity once more. But not before one final incisive put-down: the KO blow that would reverberate around the world and become legend as the insult that finally ended the Emmys.

"
"
"I'm now going to watch Breaking Bad. I'd call this Emmys "Breaking Sad"."
And Nikki Finke wept, for there were no more words for her to conquer.