It's a proud moment when

gets to share the same breathing space as Sir Nicolas of Cage. The man - nay, the legend - has not only provided us with years of onscreen entertainment, but also a lifetime's worth of curious offscreen antics and reason for much debate and deliberation. Needless to say, if he knew the amount of love we have shown him on the site over the years, I probably would have been asked to leave the room.


Seeing as the press junket for Ghost Rider: Spirit Of Vengeance (out on Friday 17th Feb, PR-friendly fans) was little more than a small Q&A sesh with The Cage, I got to speak to a man that, for some time now, has been the focus of much love and attention on these sticky webpages. While he proved to be very intense – passionate about his acting methodology (no matter what film he was talking about), and mulling over every answer in that slow, determined drawl of his – he still managed to have fun, crack a smile and shatter the illusion that he might actually be a god who just happened to be wearing a strange, thick-knitted half-jumper/half-cardigan thing.

Talking about everything from filming on this latest comic-book adaptation, to his own religious beliefs, as well as discussing his reputation for being (*cough*) a little eccentric, it's safe to say that SHIT WAS SHOT. Here are the five best quotes that came out of one of my favourite things I've ever done.
1. On being described as a lunatic

"
"
"I'M not insane - Damon Macready from Kick-Ass is insane. HE'S the one who's 48 years old and dresses up like Batman and goes out and tries to seek vengeance. HE's the one that probably watched a lot of Adam West and tried to talk like him. Not me. That's a character. I don't do that in my life."
2. On his love of comic-books 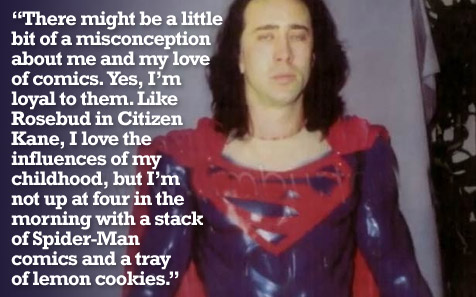 "
"
"I'm attracted to characters that allow me to realise my more surrealistic and abstract dreams for film acting. Acting should be no different to painting or music in that, if you can get very 'outside the box' or, as critics like to say, 'over the top' in a Francis Bacon painting, why can't you do it in a movie? But in order to do that as an actor, you have to find characters that allow for that behaviour to make sense within the context of the movie.

"So I'm attracted to characters like Terence in Bad Lieutenant – he's high on cocaine so I can make those sounds and those moves and do crazy things with old ladies and handguns. Or in Ghost Rider 2, because you see that my face is morphing into a skull and there's pain in that, I can then do things like [crazy Cage moment in the film] "scraping at the door, scraping at the door" and make those notes come to life."
4. On The Wicker Man 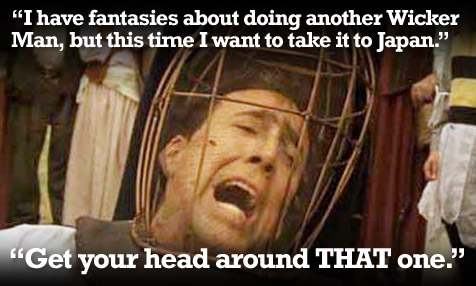 5. On what it was like to play Ghost Rider

"
"
"It was an opportunity to experiment with movement and with my state of mind; to truly believe that I was this character. It was actually Brian Taylor who had the idea for me to do that – he was an enormous advocate of it – and the first thing I said was 'Can I wear a mask?' so as not to feel totally ridiculous as I walk on the set and play this part.

"But there was a writer called Brian Bates who wrote a book called The Way Of The Wyrd, and also The Way Of The Actor, and in that book he put forward the notion that all actors, whether they know it or not, come from a long distant past of medicine men and shamans. And the shaman would go into these altered states of consciousness to try to find answers and solutions to give to the village people.

"In this day and age, that person would be considered psychotic, but when you think about it, it was a way of channelling the imagination to talk to spirits to get answers for the village. So they would wear masks or they would gather objects that had some magical relevance and I thought 'Well, because I'm dealing with this supernatural character, why don't I try a little bit of that and see what happens?'

"So I would paint my face with black and white make-up to look like a skull, like some kind of Afro-Caribbean voodoo icon or New Orleanian voodoo icon by the name of Baron Samedi, who looks like a skeleton but is very finely dressed. He's the spirit of death, he's also a spirit that loves children and he's a very lusty voodoo icon.

"I would paint my face and I would put black contact lenses in my eyes so it would look more like a skull and you couldn't see any pupils or any whites of the eyes. And then I would sew some ancient Egyptian artefacts into my costume and get some rocks that had some alleged frequencies to them – who knows if they worked or not.

"The point is that it stimulated my imagination to make me think that I really was this character. And then I would walk on set projecting this aura of horror and I would see in the eyes of my co-stars that the fear was there and it was just like oxygen to a fire… and that led me to believe that I really was this spirit of vengeance.

The problem is, if you have a Christmas party in Romania and some schnapps is involved and you're still in character, all hell can break loose. And I'm lucky I'm not in a Romanian prison."
At this point, it seems prudent to say: Dude... you were playing Ghost Rider. No one got to see any of that stuff because it got covered up by a big CGI flaming skull. Next time, can I suggest... I don't know... acting?

More:  Ghost Rider Spirit Of Vengeance  Ghost Rider  Nicolas Cage  Idris Elba  Neveldine And Taylor
Follow us on Twitter @The_Shiznit for more fun features, film reviews and occasional commentary on what the best type of crisps are.
We are using Patreon to cover our hosting fees. So please consider chucking a few digital pennies our way by clicking on this link. Thanks!