The five worst things about Dexter

My relationship with Dexter is much like that of the protagonist with his girlfriend in the Smokey Robinson song "You've Really Got a Hold on Me". She mistreats him constantly, but he keeps coming back for more without really knowing why. I watch Dexter every week, cringing at various aspects of the writing, then look forward to the next episode. I'm an idiot.


In fact, feel free to listen to this while you read.


Now, Dexter isn't a bad show; far from it. The acting and direction are excellent, and in its earlier seasons it did a great job of balancing a villain-of-the-week structure with its wider character arcs. And although it's probably ending at the right time, it's kept me wanting more for nearly eight seasons now.

It's problematic to have a psychopath as your lead character, obviously. Leave aside getting the audience to like him - which the show has done very successfully - but when you insist on using his voiced-over thoughts as exposition you might run into trouble.

In the first episode, Dexter informs us through his thoughts: "I don't have feelings about anything, but if I could have feelings at all, I'd have them for Deb." Kind of heavy-handed for someone who apparently doesn't experience empathy to acknowledge and discuss it.

Even though he's not strictly breaking the fourth wall, the fact that he punches up his thoughts for our benefit suggests a playfulness which doesn't chime with the character, particularly because he often thinks in awful expository puns. "Good morning, Dexter," someone might say to him. "The wife of the man I killed last night is doing some GOOD MOURNING too," he might then think to himself. "You know, because I killed him. He's dead." Yeah thanks, got it.

"But I need to know if murder is part of the package." GROAN.
Harry

The first two seasons showed Dexter flashing back regularly to times in his childhood when his adoptive father Harry was giving him advice. From the third onwards, though, they decided that was too much like hard work so Harry's ghost just started appearing in the back seat of Dexter's car whenever he was driving anywhere. The actor who played Dexter as a teenager must have been pissed.

Because the show doesn't entertain the prospect of the supernatural you presume we're dealing with a hallucination of some kind, or just a manifestation for our benefit of Dexter's conscience. But why? We can already hear the guy's every thought. Why do we need to see him arguing with his dead dad whenever he reaches any decision point? If you've already got one fairly shaky narrative device in place, why introduce another? Especially when it raises the suggestion that Dexter is delusional, which clashes with the idea of his being a calculating psychopath.

Couldn't we have just heard Dexter thinking his side of this conversation? Everything else is just him saying: "But Daaaaaad..."
Computers and phones

Yeah, text messages don't look like this. Nor do computers go "beep" when they return a search result.
That ain't working

Every season premiere brings with it some hasty backstory about why something is now different. Batista and Barbara Gianna are together in season three, but she's nowhere to be seen when the next one starts. Then Batista and LaGuerta, having been married and seemingly very much in love, are suddenly divorced at the beginning of season six. And didn't Batista used to have a daughter?

Plots are jettisoned for the writers' convenience. Quinn is being investigated doggedly by Internal Affairs in season three, raising the question of whether he's dirty, but the investigating officer seems to give up without explanation and we hear no more about it. Debra finds out that Dexter is the Ice Truck Killer's brother, then handily forgets about it for a season or two.

So yeah, there's a lot of "Wait, what?" You end up just going with it.
Incest

Given that Dexter and Deb aren't biologically related but have grown up as brother and sister, the idea of a romantic relationship is something the writers were always going to try. Genuinely platonic close male-female relationships between characters are pretty rare on screen: it always gets written in sooner or later.

In Deb and Dexter's case it bombed pretty spectacularly. She began to acknowledge that she had feelings for him back in season six, told him about it, then found out he was a serial killer. Which is a bit of a turn-off, in my experience. It was barely mentioned again, and you got the impression the writers thought her discovery was a good opportunity to junk it. That decision was for the best, but it remains a half-baked, unrealised idea that should've stayed in the writers' room.
On the plus side, though, here's a picture of Angel and Dexter in which the word 'cock' appears between them. I'll miss these guys. They really had a hold on me. 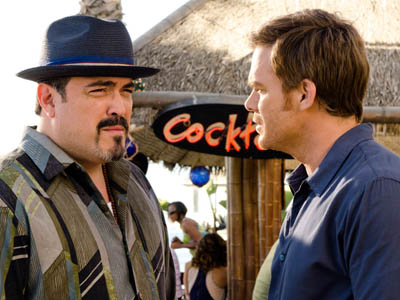 HAHAHAHAHAHAHAHAHA!!!!1
More:  Dexter  Michael C Hall  Jennifer Carpenter  Showtime  FOX
Follow us on Twitter @The_Shiznit for more fun features, film reviews and occasional commentary on what the best type of crisps are.
We are using Patreon to cover our hosting fees. So please consider chucking a few digital pennies our way by clicking on this link. Thanks!