Now You See Me 2 is the pub magic trick of movie sequels. No one asked to see your mate Steve attempt to pass a £10 note through the middle of a coin, and no one really cares either way, but there's something oddly fascinating about his insistence that it's going to blow your mind. And yet it always, inevitably, disappoints. Hey, let's talk about this film poster.


Now You See Me 2 has a new poster that performs quite a nifty sleight-of-logic trick. Here it is in all its indignity: 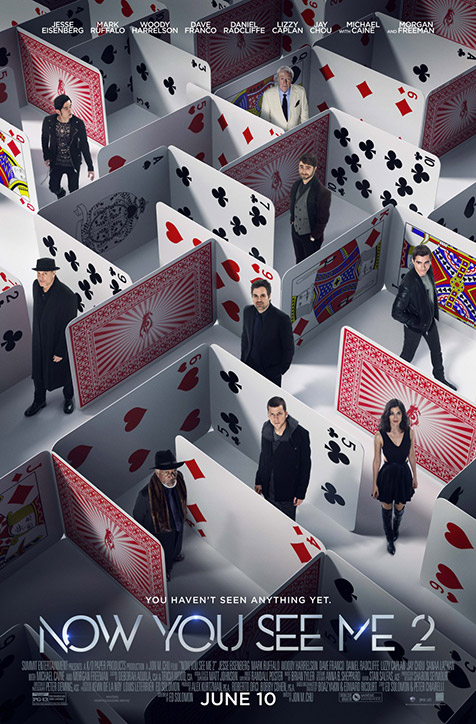 Not that bad, you might think. A bit rubbish, but ultimately a fair, visual analogy for the twisted, complicated illusions that will no doubt come to play in the film, you might say. Let me correct you.
1. This is the most useless maze there ever was

So the key cast members appear to be stuck in a maze made of giant, unshuffle-able cards. What kind of ruse is this? Is it a trap set to capture these renegade magicians, or is it a scenario of their own devising, one that illustrates the complex plotting of whatever meticulous strategy they carry out in the film?

It doesn't matter because they can all SEE OVER THE CARDS. This is a small, ineffective maze; the kind usually enjoyed by children. It's an activity to keep class 5b entertained for 20 minutes while on a school trip in Cornwall."Oh look, the exit sign's over there. Let's head that way. Nah, we can just climb over if we get stuck."
2. No one is really there

None of the characters seem particularly perturbed that they are in a maze of cards. In fact, it's only Dave Franco and Jay Chou who seem to be making any effort to leave. Poor old Michael Caine is left looking like he is going 'hands-free' at the the only urinal in the whole labyrinth.

Of course, this is because all of the actors have merely been superimposed on to the page. You can tell because none of them look like they even remotely belong in that setting, with that lighting, or within 100 yards of each other. Daniel Radcliffe in particular looks like he has turned up to the premiere.
3. It's a loaded deck

If this maze is supposed to have been built from a single deck of cards, why the fuck are there three nine of hearts? Someone's cheating, but no one has any idea at what.
4. Actually, it's a REALLY loaded deck

Wait, there are three five of hearts too! Are they part of some kind of subliminal message for the Illuminati? Am I a Scientologist now?
5. Cards, famous for their rock-solid stability

Given that a house of cards is synonymous with structural fragility, this maze doesn't actually pose much of a problem, does it? One quick nudge - nay, one quick puff and blow - will show up that the whole tangled web of mystery and intrigue has been based on a rather flimsy construction. Much like the first film.
Consider this a warning shot, Now You See Me 2. I am already calling you out on your bullshit. I can see the wires. I can tell you have mirrors up your sleeves. And Steve, I know you bought a fake coin from that odd toy store in the shopping centre. I saw them do the same demonstration there last weekend. They did it better.

More:  Now You See Me 2  Now You See Me  Jesse Eisenberg  Woody Harrelson
Follow us on Twitter @The_Shiznit for more fun features, film reviews and occasional commentary on what the best type of crisps are.
We are using Patreon to cover our hosting fees. So please consider chucking a few digital pennies our way by clicking on this link. Thanks!