The problem with Pixels: game over for Jane Krakowski

Adam Sandler's latest movie Pixels has lots of problems - the foremost being that it's an Adam Sandler movie - but its most heinous crime is surely the egregious waste of Jane Krakowski. The actress, who is by any measure the most comedically gifted of the entire Pixels cast, plays the First Lady to US President Kevin James and has approximately three lines in the entire movie (none of which are jokes). Pixels is a case study in how to waste funny women.


Krakowski, who you probably know as 30 Rock's vain TV star Jenna Maroney ("Listen up fives, a ten is speaking!"), is without a doubt one of the funniest women in Hollywood. She's the kind of gifted actress that people write characters for; Tina Fey enjoyed writing for Jane/Jenna so much she basically had her reprise the role of the psychotic egomaniac in Unbreakable Kimmy Schmidt in the form of Jacqueline Lannister-Voorhees. In other words, Jane Krakowski is the kind of woman you wouldn't expect to see playing arm candy in an Adam Sandler movie.

I repeat again: she plays US President Kevin James' wife, joining the unique and special club of beautiful women who have played the Princess Leia in the gold bikini opposite James' Jabba the Hutt (see also: Salma Hayek, Jayma Mays, Rosario Dawson and supermodel Amber Valletta). I wonder if they have a support group. The Brides of Kevin James.

It's not Krakowski's pairing opposite Kevin James that is the issue, more that director Chris Columbus and his casting agents have hired one of the most talented women in showbusiness to play an entirely empty role. It's no exaggeration to say that the role of a First Lady Cooper could have been played by anyone, actress or not, such is the dearth of the character's screen time. Here is an approximation of every line of her dialogue:

(making a cake)
"Whoah big man, settle down there with the butterscotch frosting!"

Krakowski playing such a dud is like De Niro doing a Cillit Bang advert ("Bang, and the scum on the streets is gone!"). Part of me thinks her hire was a kind of charity, much in the same way that Adam Sandler looks after all his friends by hiring them to play bit-parts in his shitty movies then flying them out to Hawaii for two days' work like a ponzi scheme. Seeing Jane Krakowski in anything is better than seeing her in nothing, right? 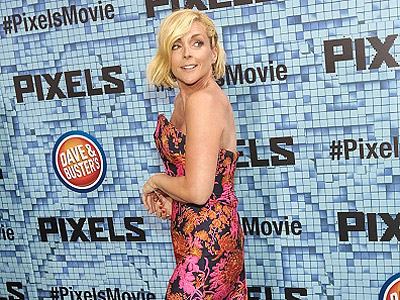 Jane, pictured here trying to sneak into the Pixels premiere.


Well, no. Not really. Because a part like First Lady Cooper devalues Jane Krakowski in ways she is all too likely to be aware of. I bet there wasn't a part of her that thought this movie would be good for her career; it's more likely it was a necessary payday between projects worth caring for. There's something very sad indeed about seeing someone as funny as Jane Krakowski going through the motions and knowing she was complicit. I bet she has some interesting stories about her time on set that I'd love to hear. I can't imagine she had any fun.

Maybe Krakowski's character had some gags that got cut? Maybe she was promised more of a substantial role? It's unlikely that her character looked better on paper; after Michelle Monaghan, the only other female character of note in Pixels is Ashley Benson, who plays a sexy videogame character called Lady Lisa who wears a tight red top and hotpants. She's a mute, obviously, and she ends up falling for Josh Gad's pathetic conspiracy nut. All of the women in this film end up caught in the non-existent lure of the podgy, directionless nerds.

You can't blame Jane Krakowski for accepting work, especially when roles for women over 40 are so scarce. The people you can blame are the dullards who wrote the script to Pixels - the laziest, most casually misogynistic, first-draftiest movie I've ever seen - and Chris Columbus, the idiot who cast a ten in the role of a two.

More:  Pixels  Adam Sandler  Jane Krakowski  Ashley Benson  Videogames  Misogyny
Follow us on Twitter @The_Shiznit for more fun features, film reviews and occasional commentary on what the best type of crisps are.
We are using Patreon to cover our hosting fees. So please consider chucking a few digital pennies our way by clicking on this link. Thanks!