The real villains of Home Alone

Like every other person on the planet, I've used this festive season as an excuse to rewatch Home Alone and the sequel, Home Alone 2: Lost In New York. One thing has become abundantly clear in doing so: these are the only movies that use horrific parental negligence as a jumping off point for comedy.


The sooner you realise Home Alone and Home Alone 2 are basically ACME movies, the better. Because if you take them at face value, they're movies that promote vigilantism, present physical violence as valid solutions to serious problems and mine child abuse for shits and giggles. Merry... Christmas? Let's not get too 'Daily Mail' about this: when filtered through a Tom & Jerry-style lens of cartoon violence, the Home Alone films are plainly harmless, fun Christmas movies.

Except Kevin's parents are inhuman monsters and need to be jailed for life.

Except for that small caveat, they are perfect Christmas films. 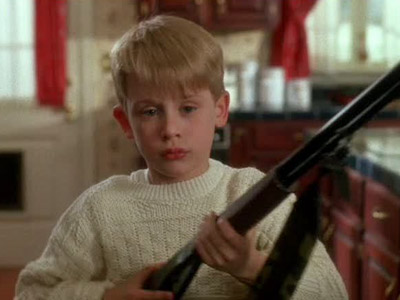 
There's no need to explain. The utter failure of Kate and Peter McCallister to adequately care for their 8-year-old son is the narrative thrust for the entire Home Alone series. I can think of no other fun festive family franchise that uses criminal parental neglect as a comedic trampet. The concept of a kid left to fend for himself against a pair of inept burglars is unique in that at any given time, the lead character - an innocent, doe-eyed, eight-year-old boy - is seconds away from being brutally murdered. Ho ho ho! Pass the Quality Street, gran!

Let's not blame Harry and Marv, the Wet Bandits. They only know a life of crime. They are victims of a society that has completely failed them. Neither man appears capable of holding down a regular job, displaying as they do a near comical lack of equilibrium. In many ways, they are the true victims of Home Alone. Frankly it's a miracle they weren't killed.

And if they were killed - say, by a blowtorch to the face, or a nail gun to the anus, or a broken neck - who'd be liable for blame? Oh, that's right: I guess eight-year-olds can't be held legally responsible for their actions. I guess this one's on you, Kevin's parents. 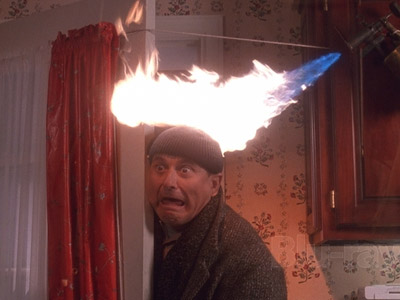 The Tony Martin defence won't help you on this one.


Kate and Peter's actions are almost forgiveable in the first movie. I'm sure we've all been in a mad rush on the morning of a big trip, and though I'd imagine most of us have stopped short of completely forgetting about the existence of one of our helpless infant children, we've all had that moment on the plane or train where we've realised the phone charger is still on the bedside table. D'oh, am I right? Ha ha. What are we like?

Due to a suspect series of plot contrivances, we are led to believe there is no one in town who can come to Kevin's aid - not the police, not their neighbours and certainly not any McCallister family friends within a 4,256-mile radius. As it happens, Kevin is pretty good at survival techniques, which is no surprise, given that his cunt parents plum forgot they birthed and raised him for almost an entire decade.

Mercifully, we're spared the grisly scene of two adult males disposing of a suspiciously child-sized corpse thanks to Kevin's moxie. But when Mom eventually finds her way home to her child, what's the first thing she does when she gets through the door? Admires the decorations, stands still and says "Merry Christmas, Kevin!" No tearful apology. No endless embrace. No snot-addled wailing. A mere festive greeting. She could have sent a card from Paris, it would have had the same emotional resonance.

The least you would expect from the McCallisters would be for them to live up to the most obvious promise: "Nothing like this will ever happen again!" Perhaps they should have added the following clause: [Family holiday scenarios are not covered under this promise. Any parental negligence that takes place on or around the festive season will be considered hilarious].

OH NO I LEFT MY IPAD IN THE TAXI


Again, don't blame the Sticky née Wet Bandits. What a cruel fate that their paths should cross with Kevin's once more. This time around, Kevin isn't even directly involved in the criminal activity - he cottons onto their plan to rob a toy store and makes it his business to fuck with them, and later, attempt to kill them. Ladies and gentlemen of the jury, I give you your criminal mastermind.

It's the sheer bloody gall of the McCallisters in Home Alone 2 that defies belief. Kevin's parents register their grievance at the police station (sadly stopping short of turning themselves in) and find time for some light-hearted jokes: "Funnily enough, we've never lost our luggage!" Ha ha, good one Peter! P.S. We found your kid, he's dead now. "Isn't there anything you can do?" pleads Kate? Oh, sure: let SOCIETY pick up the slack. How many man-hours would you like us to waste on amending your mistakes? Say, you look hungry - should we order you a pizza? How about a foot rub?

Later, Kate scours the streets of New York looking for Kevin, when she stumbles on a parked police car and requests the help of the officer inside (who's clearly on his break - no boundaries, Jesus Christ, this woman). When he gives her a perfectly reasonable response ("I'm sure we're doing all we can do"), she shoots him a shitty look, narrows her eyes and asks in the most condescending and sanctimonious way imaginable: "Do you have kids, officer?"

Surely it must have taken every ounce of strength this nameless officer had not to respond: "Yes, they're at home tucked up in bed. There are a hell of a lot of crackhead rapists out there. Well, goodnight ma'am." 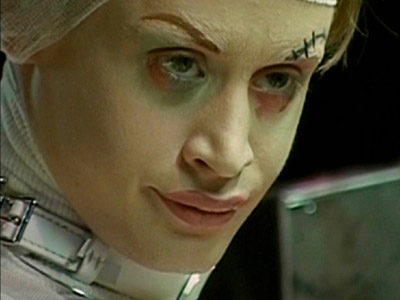 
Kevin, once again, is fine, despite making friends with a mentally-ill park dweller, jumping off a three-storey building's roof and playing with kerosene. But do the McCallister family face any penalty for their ongoing inability to protect their own offspring? No: they have fucking Christmas presents delivered to their hotel as a reward. I do not recognise this America. Thanks Obama. Thanks a bunch.

Let me state the obvious just for clarity to emphasise just how awful the McCallisters are. Joe Pesci's bandit tells a nine-year-old child he'd take great pleasure in shooting him and he's still not the most morally unsound
character in the film. Home Alone is a movie whose villains are in plain sight throughout: the fact there's no Childline support number in the closing credits is surely a horrendous oversight.

More:  Home Alone  Christmas  Macaulay Culkin  Catherine OHara  John Heard  Parental Neglect
Follow us on Twitter @The_Shiznit for more fun features, film reviews and occasional commentary on what the best type of crisps are.
We are using Patreon to cover our hosting fees. So please consider chucking a few digital pennies our way by clicking on this link. Thanks!