Because what kind of Halloween would it be without someone telling you all about the films they're watching?


Every year, Shiznit HQ is decked out in full Halloween regalia - pumpkins, plastic bats, witches hats and cobwebs (although they may have already been there). This isn't an officially sanctioned site activity, more down to the fact that my wife is mental for Halloween and - in all honesty - a little bit weird in the head.

After a while, her enthusiasm for all things creepy, kooky, shrieky and spooky tends to rub off on you, so we set up a gigantic stack of horror DVDs to watch over the weekend. I'll be updating you with my new and highly intelligent findings all Saturday night and throughout Sunday too. Before we begin, get a load of the official site pumpkin. NAILED IT. 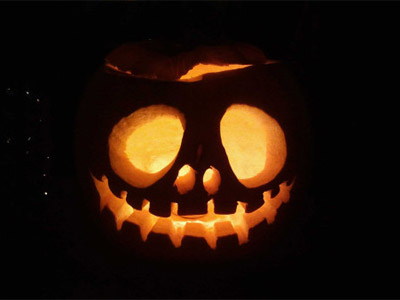 
Anyway, without further ado, here are my findings from this weekend's wacky Halloween adventures. Hold onto your butts.

13:00 - First up this afternoon was John Carpenter's The Ward, a film so bad you'd think John Carpenter would want his name taken off of the title. It's his first film in 10 years so you can forgive him for being a little rusty with the scares, but in all honesty, there are very few positive things you can say about it. Like, Amber Heard is quite pretty. But that's it.

It seems like curmudgeonly Carpenter is steadfastly refusing to accept that horror has moved on in the last 30 years - there are still loads of predictable mirror shots, cheap-ass scares, POV shots peering through windows followed by LOUD NOISES and so on. And the effects are really, really shit. The baddie is half ghost, half zombie, which isn't even a thing. She pops up behind people when they're not looking, but then tries to throw them over desks and into walls. Are you a ghost or not? I am not keen on this breed of zomghost. ZOMG indeed.

In conclusion, as it's set on a psych ward, I can confidently call The Ward by its new name: Shitter Island. That's only funny if you don't follow me on Twitter and didn't hear me tell it earlier. I award it two pumpkins out of five, in a new scoring system I am now planning to abandon.

15:35 - Next up, a rewatch of Drag Me To Hell, a film which I'm sure I previously owned but had mysteriously disappeared when I went to take it off the shelf. GHOSTLY GOINGS ON? Probably, but the wife bought another copy anyway just in case.

Most of what I said in my original review still stands - it's just as inventive, smart and blackly funny as you'd expect from Sam Raimi. The story of a female loan manager (Alison Lohmann, cute as a button LOL) who is cursed by a gypsy woman after she denies her a bank loan, it's an excuse for Raimi to ladle on the gore and get back to his roots (although not the rapey tree roots from The Evil Dead, just his spiritual roots).

It's straight-up as good a standalone horror film as you'll see - lean, mean and Raimi puts his leading lady through hell. I'm pretty sure it has the most badass horror movie title of all time, although I'm not sure if Terror At Blood Fart Lake technically qualifies as a real movie. 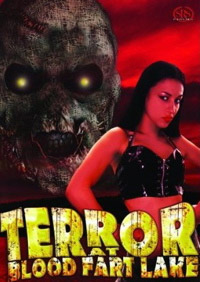 Probably not.
18:00 - Time for a break. That means the Dungeons & Dragons episode of Community (not Halloween related, but then SHUT UP) and a pizza from Dominos. Mighty Meaty with Gourmet Garlic Bread, before you ask. Finally, we tuck into the sweets we bought for the trick or treaters (in full knowledge that, as we live behind an electronically locked door, we won't be getting any). This is how to do Halloween properly.
18:30 - The wife is watching Strictly Come Dancing. AAARRRRGH IT'S HORRIBLE etc.

20:10 - Time for The Exorcist. Don't tell Mark Kermode, but it's one of those films that, though I'm fairly sure I've sat through it in its entirety when I was much younger/drunker, I probably couldn't walk you through it scene by scene. Right, I'm about to put the 'live' in 'liveblog', so keep stabbing F5 like a maniac for further updates throughout the night...

20:17 - The beginning of the movie has been delayed because two chocolate puddings have just gone in the oven. It's how Friedkin would have wanted us to watch it.

20:30 - The curse of The Exorcist strikes again! My stupid fucking computer just deleted the entire liveblog. CURSE YOU, SATAN. I restored it, using an open browser window, though, thus breaking the curse. And we're off.

20:41 - Five minutes in, and not a single cat in cupboard or zomghost for shame. William Friedkin's puce cardigan in his intro was the scariest bit so far.

21:02 - Nothing good has ever come of investigating a weird noise from an attic. Just nuke the fucker to be sure. It can only ever be ghosts, demons or pigeons - you win either way. 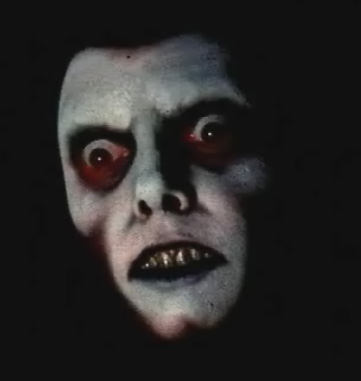 21:22 - Shit, as they say, just got real. This is all most unsettling. Those stupid doctors in their stupid waistcoasts don't know what they're doing. I do like the size of all the collars though. It's distracting me from the cursing and the bloody wanking.

21:30 - Parental pop quiz: Would you rather have your child possessed by the devil, or interested in the music of Justin Bieber? 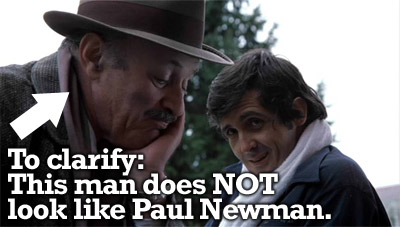 21:46 - Yeah, things are getting religulous now. I will NOT let Jesus fuck me, thank you. Still, you have to admire the use of the word "cunting". Only William Friedkin and Nick Love have ever used it properly.

21:52 - GUNGE ALERT! This is like the most horrendous episode of Noel's House Party ever.

22:01 - Totes resigned to the fact I'm getting no sleep tonight. 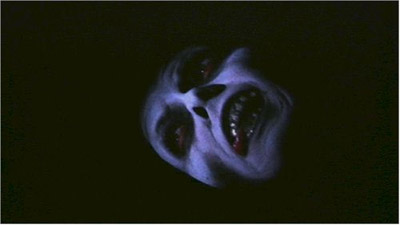 22:21 - Just realised we're watching the cut version. Kermode would be angry. That means we've missed out on the spiderwalk, the horror of which doesn't really come across in this animated gif.

22:27 - Wise words from the wife on Regan's final scene: "Her vagina would be ripped to shit after what she's been through." Comforting.

22:30 - So that's The Exorcist. A thoroughly fucking terrifying film which basically proves the existence of evil. Why did I think pea soup would be a wise meal tonight, why? Stupid, Ali! Stupid! At least tonight's last movie is something a little lighter...

22:39 - Tonight's last film is Happy Birthday To Me, a slasher film I know nothing about, other than its ridiculous poster and a potentially brilliant tagline: "Six of the most bizarre murders you'll ever see." I'll be keeping count. Let them eat cake!

22:49 - Murder #1: Young lady has her throat slit. This shit is so bizarre! I'm not sure it can get much weirder, but whatever!

22:54 - Five minutes in and I already wish a bizarre death of everyone in this movie. These punk kids are joyriding and boozing and pranking the locals. They all have extremely shit haircuts. They deserve to suffer.

22:57 - It's cool that the graveyards in this movie could afford to be fitted with dry ice machines. Makes for some atmospheric grieving, no doubt.

23:14 - No one has died for AGES. Here comes the killer though, all dressed in black - albeit with white trainers on. Foolish.

23:16 - Murder #2: French boy gets scarf thrown in motorcycle engine. Strangles him. My head is spinning! How can they top that?

23:19 - During this moment of downtime, here's that ridiculous Happy Birthday To Me poster in full. 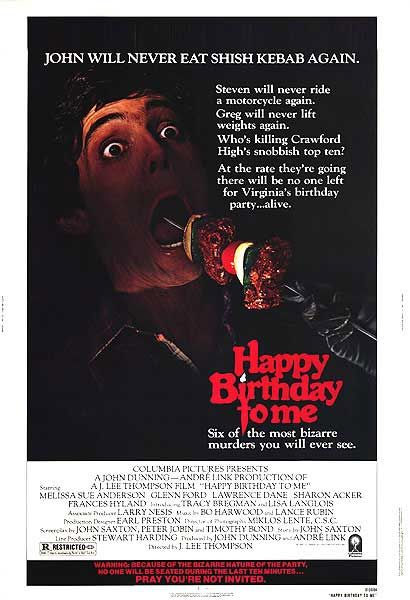 23:27 - Murder #3: Assailant adds extra weights to gym asshat's dumbbells. He drops them on his neck, which then explodes with blood. That was kind of bizarre. This sort of predates Final Destination in a way - everytime someone starts performing any kind of physical activity or event, they have approximately three minutes to live.

23:43 - I wonder how much the guy who yelled "HEY EVERYONE! I THINK THEY FOUND SOMETHING OUTSIDE!" got paid? And just in case you're counting...

I am disappoint ಠ_ಠ

23:46 - There has been at least one double-bluff per death so far in this movie. And one flashback per death as well. I think this is all to paper over the cracks, the problem being NONE OF THE DEATHS HAVE BEEN BIZARRE.

23:50 - Murder #4: The taxidermist just got STUFFED! By which I mean 'stabbed'. My pun was actually far more clever than his death.

00:02 - Someone needs to do a supercut of shower curtain reveals. To clarify: someone else.

00:04 - So it turns out that the female protagonist might also be the villain, unless she's going crazy, or her amnesia (seriously) is incorrect. At any rate, that total cunt from earlier still hasn't been killed yet. Hoping he's being saved for last. I vote for Monster Truck up the ass. 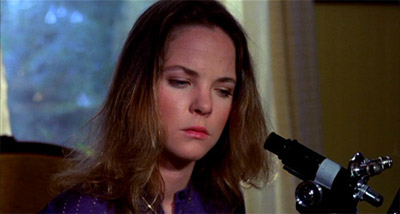 I don't even think SHE cares at this point.


00:09 - Believe it or not, they can sell adverts on The Horror Channel. Welcome relief, if far too brief.

00:15 - I think Murder #6 was the doctor getting his head smashed in with a poker, although you didn't even really get to see it. Hello, Trading Standards? I'd like to quibble over the usage of the word 'bizarre'...

00:20 - Wahey! All the movie's corpses made it to the girl's birthday party after all. Little tiny birthday hats on dead bodies make everything better!

00:21 - Now the dad's been killed all over the cake. "Not on the cake!" yells the wife, who is apparently rooting for the cake.

00:27 - Well that was entirely ludicrous. More twists than Shyamalan on the dancefloor. It was HER! No, it was her SISTER! No, wait! It was SOME OTHER RANDOM GIRL! The most important thing is that it's over. The second most important thing was the tiny little birthday hats on the corpses. Tee hee.


That was Saturday. See you Sunday! OR WILL I etc.

More:  Halloween  Liveblog  Horror
Follow us on Twitter @The_Shiznit for more fun features, film reviews and occasional commentary on what the best type of crisps are.
We are using Patreon to cover our hosting fees. So please consider chucking a few digital pennies our way by clicking on this link. Thanks!