You may or may not have seen the first official image of Henry Cavill as Superman from The Man Of Steel this week. Here it is. I won't be looking at it, or anything-else Superman-related for that matter, until its release in 2013, as part of a self-enforced Kryptonian diet – an experiment to experience a blockbuster knowing as little about it as possible.


Though I may be a film fan and a blogger, I feel the way movie news is presented and consumed online has led to a culture of obsessive compulsive consumption – the exhaustive need to analyse everything, endlessly. Yes, technically it's a marvel that set snappers and insiders can divulge every last detail of a film's production to a salivating audience in an instant. But does this 24/7 buffet of information actually improve the experience of a movie as a whole? I suspect it does the opposite: raising impossibly high hopes that are almost always dashed.

It's easy to see why this 'micro-blogging' can be such a turn-off. The online coverage of a high-profile movie generally follows a template like this: 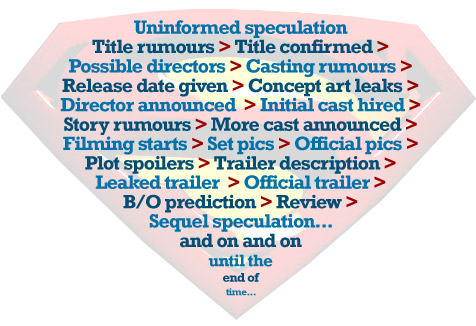 I get it. It slakes a lust for information; scratches an itch. But it's unhealthy and often unnecessary. For example, SlashFilm.com – a fine website who I pick on more often because they're the biggest and most popular, not because they're not very good – ran approximately 57 stories on the new Superman movie before the first official still was released this week. That's more than one story a week for a whole year with barely anything to go on. Check out these two articles, posted within a week of each other:

So does that mean it'll have Inception Horn or not?


If you choose to opt in to this media frenzy – and for fanboys, the curiosity almost always proves too much – then by the time your favourite movie is released, you'll know absolutely everything it's possible to know about it, including the cast, the story, the major scenes and characters and, if you're a real sucker for punishment, the ending. The chances of being surprised, pleasantly or otherwise? Zero. Where's the fun in that?

Here's what I'm proposing: a total media blackout on a forthcoming tentpole movie. I won't be looking at any official stills. I won't watch any trailers. I won't read any news stories or spoilers or casting announcements. If I'm driving and see it advertised on the side of a bus, I'll ram the damn thing off the road. Hopefully, this will result in a unique experience: viewing a big-budget film with no idea what to expect.

The movie I've chosen is The Man Of Steel, Zack Snyder's reboot of the Superman story. The reasons for this are two-fold:

Superhero and comic-book films are subject to increased scrutiny due to their existing userbase, with Superman a particular fan favourite. The level of interest in the cast, the character and the movie in general is high, and will only get more frenzied towards release. It's a franchise that lends itself to the kind of media saturation and precision analysis that I spoke of above. In other words, it's the perfect candidate. Also, 'The Superman Project' is a great name for a project. Way better than 'The Hobbit Project'.

I don't much care for Superman anyway. What, you think I'm going to resist watching the trailer for The Dark Knight Rises? Are you crazy? Me and Kal-El don't have a lot of history so the blackout shouldn't be too hard. I'm neither predisposed to froth up my fanboy juices or go in with a negative attitude. It's the perfect control movie for the project, even if Superman Returns was a bit gash. 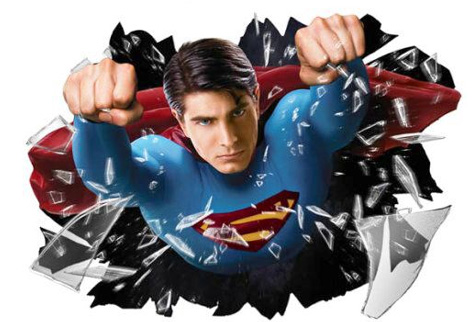 
Obviously there are things I already know. Henry Cavill is playing Clark Kent. Amy Adams is Lois Lane. Zack Snyder is directing. I think perhaps Kevin Costner is in it, somehow. Also, I'm pretty sure Superman can fly and wears a cape. But that's about as far as my knowledge of The Man Of Steel goes, and I'd like to keep it that way. Don't worry though, Luke and Matt will keep the site up to date with any really important Superman stories. I just won't be reading them. Expect the percentage of typos to rise sharply.

So, with production underway and official images starting to appear, The Superman Project has taken flight. Will it make for an interesting experiment? Will the less-is-more approach result in a different opinion on the finished movie? I'm intrigued to find out and genuinely excited at the thought of watching a mega-bucks superhero movie without the slightest inkling of what's to come. JOIN ME.

Naturally, this provides all of you with a great opportunity to link-bomb me with pics and videos when the time comes – rest assured, your insolence will only make my resolve more steely. A bit like Superman.

More:  The Superman Project  The Man Of Steel  Superman  Henry Cavill  Amy Adams  Zack Snyder
Follow us on Twitter @The_Shiznit for more fun features, film reviews and occasional commentary on what the best type of crisps are.
We are using Patreon to cover our hosting fees. So please consider chucking a few digital pennies our way by clicking on this link. Thanks!