JUSTICE. IT JUST IS

A new Imax poster has been released for The Equalizer 2 and, on first glance, it may just look like a silhouette of Lady Justice superimposed on Denzel Washington’s shirt, but look closer. Look deeper.


Here’s the poster in question. Study it. Soak it in. Cover all the angles and let it speak to you in all the ways that it needs to communicate with you. Then let me tell you below all the things you missed. 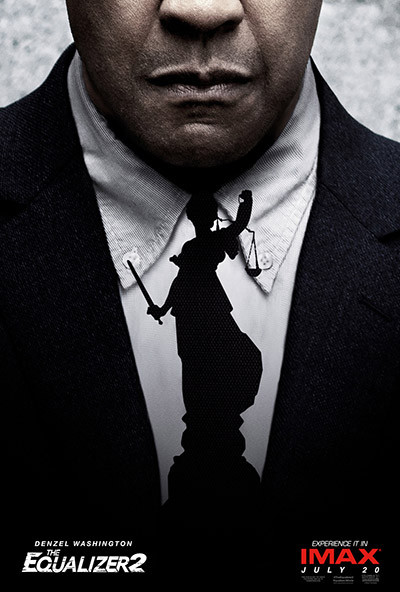 Firstly, with her scales of justice, this popularised representation of the Roman mythological Iustitia stands for moral equivalence for all in the judicial system. And this is perfectly in keeping with the way that Denzel Washington’s Robert McCall smashes people’s faces in and shoots them in the throat if they kidnap someone or whatever.

Often overlooked, the sword in her other hand represents the swift execution of justice, a nod to McCall’s ability to quickly dodge a punch and then grab the other guy’s arm and break it, or just pistol whip him into unconsciousness, for example.

The other aspect about Lady Justice is her blindfold, which you can’t see here because she is entirely a silhouette, which means that, in this version of the famous figure, it’s not just her eyes that are blind, but all of her. Also, notice that we don’t see Denzel’s eyes on this poster either. This usually indicates impartiality, but in this case the intent of the film is clear: McCall doesn’t see your bullshit. He doesn’t want to hear it (no ears either). And he’s going to dish out some swift swords of justice execution if you get in his way.

Most importantly though, this depiction of Lady Justice is positioned against a very calm, poised Denzel Washington, his buttoned-down collar representing the restrained nature of his inner rage and barely concealed… wait is it supposed to be his tie?

It’s supposed to be his tie, isn’t it.

More:  The Equalizer 2  The Equalizer  Denzel Washington  Posters
Follow us on Twitter @The_Shiznit for more fun features, film reviews and occasional commentary on what the best type of crisps are.
We are using Patreon to cover our hosting fees. So please consider chucking a few digital pennies our way by clicking on this link. Thanks!