It's one of the weirdest phenomenons in modern movie history: how is it that so many Coen regulars wind up in Transformers movies? See the culprits as we attempt to figure out what possible motives the guilty parties could have.


Michael Bay is clearly a fan of Joel and Ethan Coen: how else could you explain the fact he keeps hiring frequent Coen collaborators - not to mention family members - to appear in his Transformers franchise? If it's an attempt to bring some dramatic oomph to the projects, it was misguided: no one came out of Transformers: Dark Of The Moon saying "Well it sucked, but Frances McDormand hit it out of the park". Let's look at what we're dealing with. 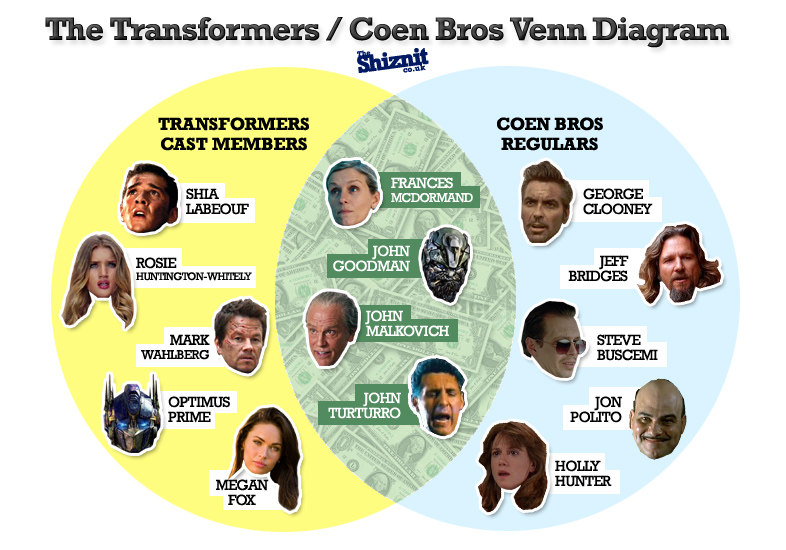 I don't know if you noticed, but when you mix together the two completely random colours I used for this Venn diagram, it makes the colour green - and an image of dollar bills mysteriously appeared in the background. Weird! As you can see, Michael Bay has tainted all of the Coen's best Johns: Goodman, Malkovich and Turturro have all been tarnished (in Turturro's case, a Transformer literally pissed in his hair). Given Steve Buscemi's friendship with Michael Bay, it's surely only a matter of time before he's playing a Decepticon called Weasel who dies horribly.

So what can we extrapolate from this information? Well, either Transformers 5 is going to lit by Roger Deakins and scored by Carter Burwell, or Josh Duhamel is going to blow our freaking minds in the new Coen Bros movie.