The Deaders are back, and Rick's playing Lemmings on the Mayhem level. "Let's go!"


Confident, aren't they? The Walking Dead showrunners and the characters too. First episode of the first season since it's been established beyond doubt that this is a big hit show, not a cult sleeper, and they plunge you into confusion from the start.

You're expecting us to pick up straight after Rick shoots Pete and turns to see Morgan watching him, and we see a quick glimpse of this but then we're off to a quarry somewhere nearby, with thousands of walkers trapped in it - easily more than we've ever seen at once, because this is now a big show that does big set-pieces - blocked off by trucks at either end. We're in medias res, and Rick's ordering everyone around. Is this weeks or hours later? Why do they have flare guns? Who's the bloke with the specs and the dreadlocks? One of the trucks slips off the crumbling precipice and into the quarry, letting them loose. The gang apparently have a plan (Carter says "This was only supposed to be a dry run!" confirming him as a weak link and surefire neck-gusher within the hour) and they set about it. 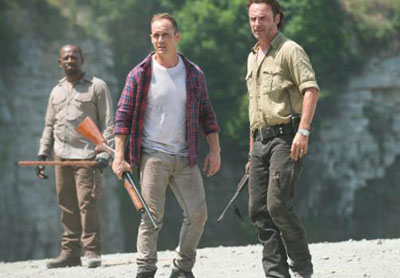 
Christ knows what this plan is, though. We're in black and white now, cutting back to who knows when, but over the course of the episode we flit back and forth into colour, pushing us expertly closer to the real-time conclusion.

Now we get it. To divert them away from Alexandria, Rick's playing Lemmings. They draw the walkers out with Daryl's motorbike (which would've been far more awesome were it a pushbike with a basket, like in a slow-cycling race at a village fete) and Abraham and Sasha in a car, driving slowly. They set up steel walls and fire the flares to draw and divert the walkers in the right direction. Rick explains everything as we go along. A miner here, a bomber there, send two up the wall so the first one can block and the other one turns around and bashes through because the arrows point back the other way. As long as his Amiga doesn't crash, nothing can go wrong.

Except it does, of course. Carter, a berk who had the gall to question Rick's authority and even plot to kill him, nearly ruins it by getting his face bitten and screaming too much while it happens, the big girl. Rick gives him a knife to the base of the skull, one of the many examples of him doing the right thing for the collective without hesitation, no matter how brutal. Morgan might not see it that way, though. Still, it sees the way clear for the drivers to lead the horde the remaining 20 miles, until a massive, inexplicable horn sounds, turning them back towards Alexandria. 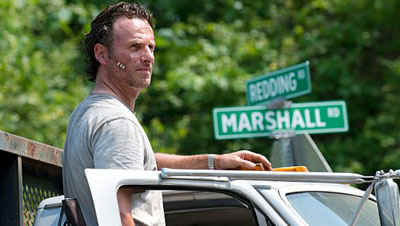 There must be a hidden meaning in those signs. I will devote the next week to devising an unsubstantiated theory about them and arguing about it on the internet.


Now Morgan's back, he's acting as Rick's judge; a sort of higher power where he previously just saw empty sky. He knew Rick when he was first out of the hospital, looking for Carl and Lori, and he's seen the scared human before the unrelenting brute took over. They take Pete's body out to bury in the woods, and Rick wants to just dump him. "That's not who you are," Morgan tells him. "I know."

"Hey: you don't," Rick says. He's probably right. There was a sense in the last season that Rick had overcome his struggle to regain his humanity but he hasn't, not really. In repose, like in some of the black and white scenes here, especially on the porch with Morgan and the baby, he seems calm and centred, but a wall goes up whenever there's the slightest threat, and it's total focus on survival. I imagine he'll end up killing Morgan because his chiding towards a moral approach will eventually get in the way. And in fairness, Morgan does say stupid things, like "Way I look at it, sometimes you're safer when there's no way out", which makes fuck-all sense. You're on borrowed time, mate.

There are a couple of daft bits, like the unexplained decision to wait till later before easily clearing a small building of its walkers in advance, when the noise they're making will draw the horde towards them. This forces Glenn, new guy Heath (Corey Hawkins, No Longer D.R.E.) and Nicholas to clear it on the hoof for no good reason. Also Abraham is drinking and taking stupid risks, so file him under "face bitten off by Christmas". But this is a celebration of the main characters' confidence and ingenuity, and a brilliantly realised logistical challenge. The time jumps are just the right level of confusing then eventually satisfying, and the plan is clarified by the aerial shots and Rick's explanation. If it weren't for the horn, Rick would've been sitting back and hitting fast-forward, watching them all spring into the exit. 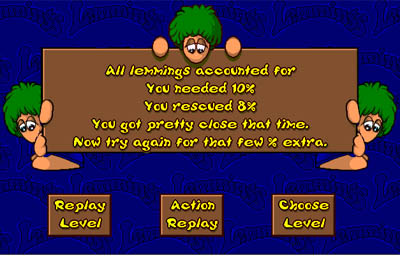