The third live show of this year's X Factor was a total fiasco. They also had problems with the sound. Thank goodness Nile Rodgers was there to save the day, the Chic disco don standing in for Robbie Williams when he swans off on tour to South America or whatever excuse he's using to strand his wife in the UK without him for a fortnight. Still, Nile Rodgers. The elusive Nile Rodgers. Did you know you only get to see Nile if you say his name into a mirror three times? And every time you turn on the telly.


Saturday night
As is traditional on 3rd November, it was Halloween. Or Fright Night, just to throw smartarses off the scent. Simon Cowell had come as a mummy, Robbie Williams had come as Simon Cowell, Ayda Field had come as barely a shadow of Nicole Scherzinger and Louis Tomlinson had unfortunately come at all. Oh, and Dermot O'Leary had come as someone who'd forgotten to wipe the Marmite off his forehead oh god what was he doing in the dressing room a minute ago for it to end up THERE? 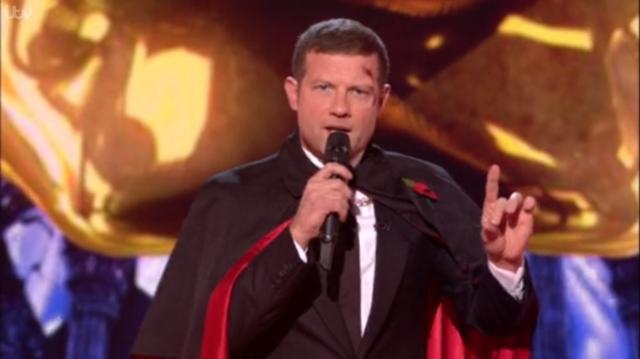 
We soon had Molly Scott to take our minds off it but maybe he was eating some of it on toast and fell asleep onto the plate? Molly made Britney's Toxic her own by wearing PVC dungarees and I guess he might have mistaken it for hair gel in a There's Something About Mary style? Sure it's all within the bounds of legality anyway.

Moving on, there were three treats before everything went wrong: Dalton Harris singing Radiohead's Creep like a Frank Ocean who gets hits; Robbie providing the biggest scare of the night, pulling a manic ‘JUST PRETEND IT'S GOOD' face as his charges United Vibe invested Leona Lewis's Bleeding Love with all the personality of, say, Louis Tomlinson; then Shan Ako finding the paradoxical ground-levelling volume in Simon & Garfunkel's The Sound Of Silence. Perhaps she was the one who broke the audio, because when Dermot came back after the break he was gurgling like a Dalek who'd just wheeled through a curtain of love-it-or-hate-it yeast extract spread.

So we couldn't really hear Danny Tetley's take on Queen's Who Wants To Live Forever? – an unwittingly sarcastic tribute to his late aunt – and missed what looked like the banter singularity itself in Anthony Russell's pre-performance VT. Everything was back to normal for Misunderstood – the first, and presumably last, LMFAO tribute act of the century, who'd be more convincing if they weren't so enjoyable to witness – and Scarlett Lee, who bravely sang through a burned eye. No, the mechanics fox me too.

Yet again, it was up to teen livewires Acacia & Aaliyah to bring the fun, which they did by dressing as clowns, bouncing off the scenery and singing sartorial-direction agnostics Kriss Kross's Jump. "I'm worried we've lost you a little bit in this performance," whined Wrong Louis. "It feels a little less cool than I think you are." A little less? They're made up as clowns, Louis. Doubt they're aiming for the latest look down Berghain. (Actually, I've no idea. Every one of Berlin's hottest clubs could be rammed to the rafters with Mr Tumbles, for all I know).

Last, but not least – well, not understated anyway – was Giovanni Spano, channelling the admittedly still breathing (and we've all got mixed feelings about that) spirits of Paloma Faith and Alice Cooper in his rendition of Paul McCartney & Wings' Live And Let Die, a festival of sickly excess that still wasn't as shocking as Simon's ensuing comments. "I feel like I've had 25 bottles of beer," swooned the puffy-cheeked nemesis of all that's spontaneous and joyful in popular music. "I feel drunk." My god, 25 beers? Is that what it takes? No wonder he can never be killed. 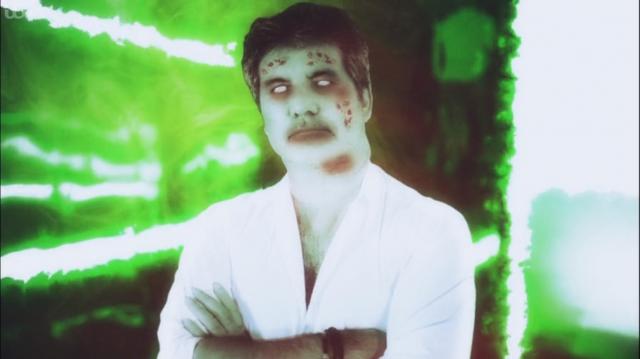 Probably time to lay off the cosmetic enhancements


Sunday night
It's Fright Night Part II as we have to listen to Danny and Anthony sing again, this time without the entertaining electronic croak. Turns out voting was suspended to make everything fair and now the price of a level playing field is an extended recap that means the end of James Arthur's guest performance is even further away.

Charisma James isn't the only returning X Factor hero. We also get Liam Payne, ensuring we don't forget him when we're rushing to vote Tomlinson on the Least Appealing One Directioner ballot, but these are all ciphers to the main event: the ejection of United Vibe, first out after the public speaks. They'll be Disbanded Vibe before you can say, "You remind me of a young Eton Road…"

Does it go to DEADLOCK?
It does not. Acacia & Aaliyah are possibly not as wonderful as some verbose writers think, because they end up in the bottom two, but at least they're memorable, unlike unlike unlike

MOLLY. Molly Scott. Acacia & Aaliyah do Stormzy's Too Big For Your Boots, Molly does Christina ‘only ever mentioned on X Factor' Perri's Human, and A&A steal a march when stand-in judge Nile Rodgers sends them through because they danced as well as sung. This isn't Strictly, Nile. People are watching Strictly.

As it happens, the unfortunate Molly is condemned by all but her mentor, Simon, who demands a recount. "Yeah, that's not gonna happen," says Dermot and drops the mic. Hopefully not into an aquarium this time.

Next week
Movie Week! Bring on Theme from Gummo! One for the old skool there. Oh, they've all gone.