Theatre review: Let The Right One In

Remember when Let The Right One In was all Americanised as Let Me In for a new subtitle-ignorant audience and everyone lost their shit? "How dare they take this awesome vampire movie and try to make an awesome vampire movie out of it!" the Internet screamed. Well, now they've done it again, but this time with real-life people acting on a small stage in front of a live audience. Is anyone outraged now? No, because this is theatre, darling. No one can be angry at theatre.


Already it is apparent that I am vastly under-qualified to critique a West End show, and yet somehow I still got sent along to check out this new, relocated production at London’s Apollo Theatre with the vague hope that I would be able to provide a reasoned criticism without saying things like "real-life acting on a stage? How twee! What’s next, sock puppets?" I will do my best.

That said, I’ll skip the usual "I'm just very much aware that I'm watching actors on a stage" cliché complaints, and just come right out and answer the one question you are likely to ask: Yes, the movie is better.

You would think that, given Let The Right One In's minimalist setting and clinical tone, it would be an easy fit for a stage play, but it seems obvious here that the production is limited by certain story constraints, and it doesn't overcome these obstacles gracefully. The overall feeling of desolation is all present and correct, but the show falls just short when it needs to demonstrate any supernatural elements of this particular brand of vampirism. 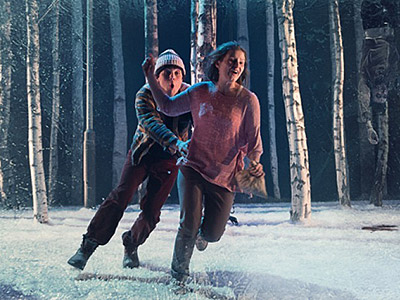 
With a familiar, stark Nordic woodland setting (despite the cast’s accents locating the action to Scotland instead) and frequently wheeled-on shop and locker room scenery, the bleak backdrop is set, but the show never quite manages to shock when it needs to. Gore is sparse, jumps are infrequent and those cool, vampire reactive moments are almost non-existent. At the same time, Oskar is more of a jolly victim than a weirdo outsider, and Eli is a robotic alien rather than a peculiar, curious child. The result is a realistic take on the vampire myth that just lacks bite in all the important places.

To be fair to the cast, Martin Quinn does an excellent job of carrying the whole show, forced to imbue his Oskar with more personality than ever before in order to project the character all the way to the back row seats, but it does mean that he loses almost all of his edge as a result. Meanwhile, Rebecca Benson makes a brave choice with her take on the estranged vampiress, giving Eli a unique, sometimes irritating, singsong voice that does the job of selling her eerie alien presence, while also giving the impression that, at any moment, she will enquire mechanically "Oskar, what is this emotion you call... love?" 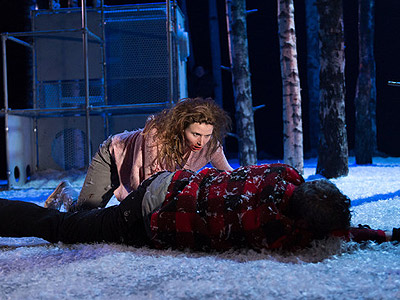 
Another added element unique to this version is the inclusion of what can only be described as ‘interpretative dance’. Call me a philistine all you want, but the sudden appearance of fluid background dancers to provide a certain... something... to particular scenes seems like an odd artistic choice for this story in particular.

Sometimes it works; several other actors shadowing Oskar’s knife-attack on a tree makes the scene stand out, even if the reason for it is open to debate, and a later occurrence which sees the rest of the cast rest their heads against background trees like they have just met the Blair Witch adds an unnerving atmosphere to proceedings. And yet – for example – a silent scene in which a restless night is played out as a fluid dance routine on a bed seems stolen from a different production altogether. 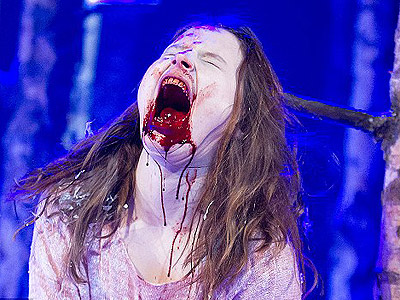 LESS OF THAT AND MORE OF THIS PLEASE.


As the story creeps towards its climactic showdown, the show feels like it hasn’t quite delivered on its promise of horror, but perhaps the best is yet to come? And, as the frozen climbing frame set slowly spins round to reveal a swimming pool-like water tank, you’d be forgiven for getting a little excited that your bloodlust is finally going to be satisfied. Sadly, what should be Let The Right One In’s defining set-piece becomes a missed opportunity as action and violence is switched out for confusion and drum and bass.

Still, there’s still much to admire about the production overall. It’s a perfectly unsettling piece of theatre and Ólafur Arnalds’ electronic score throughout provides a welcome retro flavour, but this still isn’t quite a patch on the original. By which I mean Let The Right One In: The Film. Wait, they made a novel as well? Ugh, why ruin an awesome vampire movie by trying to turn it into an awesome vampire book? This is everything wrong with Hollywood, etc.

Let The Right One In is on at the Apollo Theatre in London's West End. Buy tickets for it here and then come back to tell me that I just don't appreciate the arts.

More:  Let The Right One In  West End  Theatre
Follow us on Twitter @The_Shiznit for more fun features, film reviews and occasional commentary on what the best type of crisps are.
We are using Patreon to cover our hosting fees. So please consider chucking a few digital pennies our way by clicking on this link. Thanks!