Ditch any plans you have for Thursday March 15th, because you're coming to the Stratford East Picturehouse cinema to see our special screening of Fight Club. Tyler Durden politely requests your attendance. 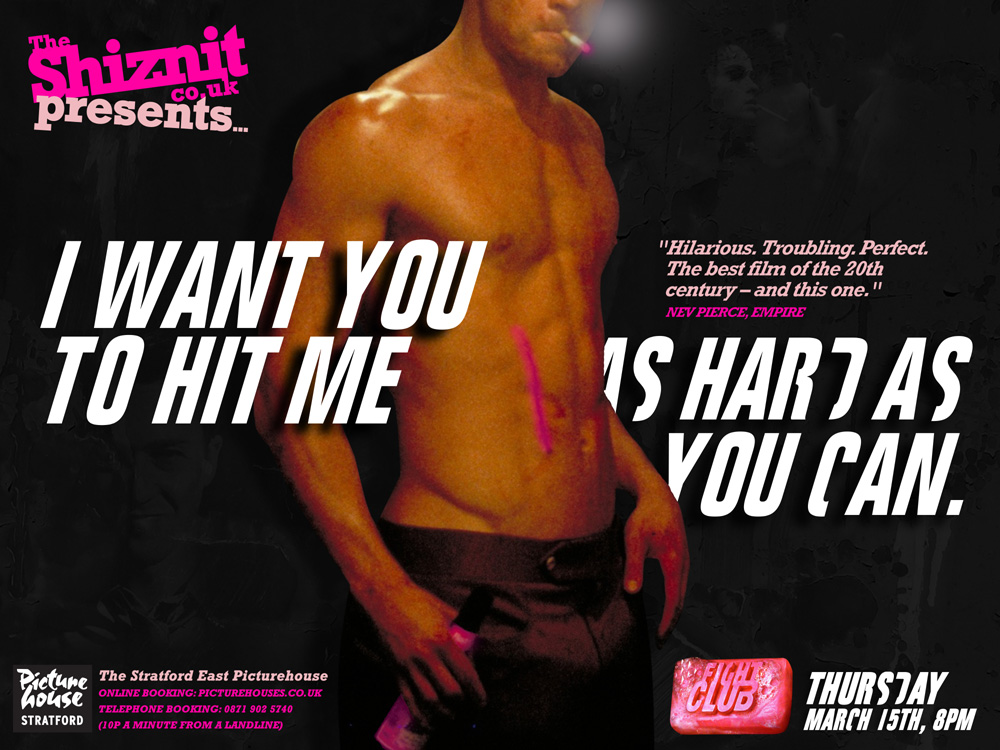 
Yes folks, we've gone beyond blogging and out into the real world. It's cold out here and everyone's looking us funny. Come and join us!

On Thursday 15th March at 8pm, we're showing an original print of David Fincher's late-nineties masterpiece, Fight Club, at the Stratford East Picturehouse. Meet us earlier for drinks in the bar (also known as 'fun in the foyer') and there will be fun, games and giveaways before the film starts. I'll say one thing: I will be giving out homework assignments beforehand. I'm foolishly attempting to start a hashtag at #projectmayhem, so look out for that crashing and burning.

If you're already convinced and don't even want to read the rest of this article, then go right ahead and order your tickets by clicking here. If you've never been before, the Stratford Picturehouse is one of East London's loveliest film emporiums, with a fully-stocked bar, fancy nuts and staff that are actually nice, smiling human beings and not acne-scarred teenagers on day release. All this, and it's a two-minute saunter from the tube station, and approximately one zillion times more enjoyable a cinematic experience than the Westfield VUE.

You noticed our subliminal Tylers, right? Maybe they worked TOO well.


Why Fight Club? It's not only one of the most bruising assaults on consumer culture since a pissed-off Naomi Klein got a shit toy in her Happy Meal, it's one of the last truly great films of the '90s – a middle-finger to the bullshit, logo-obsessed century it was about to swagger into. I can't think of a movie more in tune with TheShiznit.co.uk's policies of photoshopping funny captions on pictures of Taylor Lautner and making stupid animated gifs of Spider-Man.

Can you believe it's 13 years old? I can't remember a film that proved to be so eerily prescient – predicting the ubiquity of Apple even before the iPod and the rise of grass-roots social anarchy before Anonymous had a name. It delivers its message like a molotov cocktail through a window.

Who wouldn't snap up the chance to watch it again, in a cinema environment, with loads of cool people? And me? An idiot, that's who. Are you an idiot? No? Then order your tickets NOW. 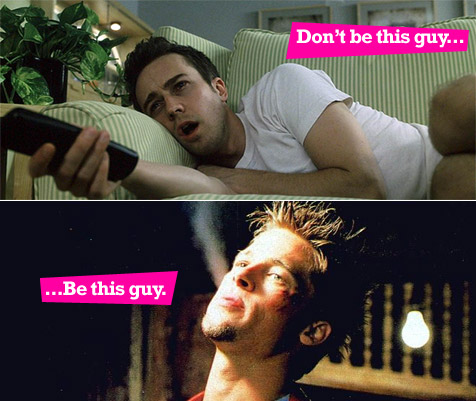 Seriously though. Do order your tickets now. I'll keep you all updated with new developments, including your homework assignments. See you there, you beautiful, unique snowflakes!

UPDATE: Do us a favour: if you're going, let us know on the official Facebook event page, there's a dear.

More:  Site News  Fight Club  David Fincher  Events  Brad Pitt  The Shiznit Presents
Follow us on Twitter @The_Shiznit for more fun features, film reviews and occasional commentary on what the best type of crisps are.
We are using Patreon to cover our hosting fees. So please consider chucking a few digital pennies our way by clicking on this link. Thanks!