First came Fight Club, now it's time for the Swingers among you to assemble. Come one come all to The Shiznit's second screening, Doug Liman's Swingers, at the Stratford East Picturehouse. 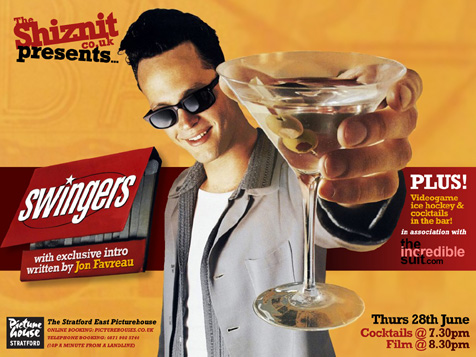 TheShiznit.co.uk Presents: Swingers
Thursday 28th June, from 7.30pm
Stratford East Picturehouse
Order tickets now - £6.50 (£3.50 members)
EXTRA SPECIAL, SCARCELY BELIEVABLE UPDATE: Jon Favreau himself has very kindly written a special intro for our screening. Come along if you want to hear me read it out before the film. I know, holy shit, right?

After the huge (read: 'moderate') success of our Fight Club screening, here at Team Shiznit we decided we wanted to do another event, albeit one with slightly less face-punching. So, I typed 'movie with less punching than Fight Club' into Google, before realising that actually, fuck it, let's just show Doug Liman's brilliant indie hipster comedy Swingers.

If you've never seen Swingers before, then you're in for a treat my friends. If you have seen it, you'll know it's an hilarious - and painfully accurate - deconstruction of the dating game: a how-to manual for getting back on the horse after being ungamely bucked. It's also one of the coolest movies ever made, with a soundtrack to die for, pin-sharp style, quotable dialogue and a Vegas setting that channels a finger clickin', Martini sippin' Rat Pack vibe. Plus, it's the thinnest Vince Vaughn has ever been on film. Thince.

Come along to the Stratford Picturehouse on Thursday 28th June from 7.30pm, where we'll be serving cocktails in the upstairs bar in association with The Incredible Suit (the guy behind the guy) to get you in the mood. We'll also have videogame ice hockey to play on before the main event. Bring your own pig-dogs, though. 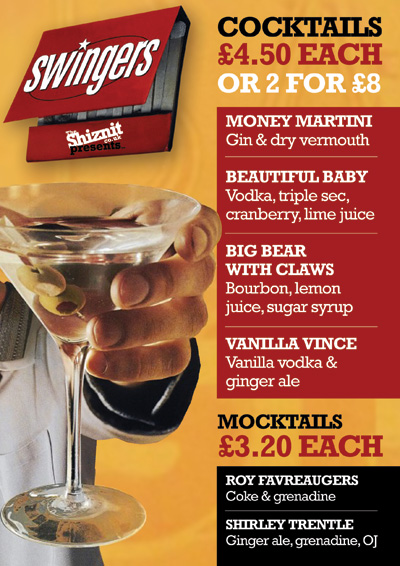 Obviously we can't enforce a dress code, but you'll want to rock up wearing some smart threads if you want to impress all the fly fellas and beautiful babies in attendance. Then you can sit down and crumple your nice outfit when the film begins at 8.30pm. At least you'll have a nice buzz going from the cocktails and the swing music.

Seriously, if you have something cooler to be doing on Thursday 28th June in the East of London, then... um, can you let me know where it is so I can call in a bomb threat? Alternatively, book your tickets now and save me the trouble. See you there, swingers! Vegas, baby! And other quotes!

INEVITABLE FACEBOOKERY: Let us know you're swinging on our Facebook page so we can get an idea how many gallons of gin to order.

This may or may not be based on my life.
More:  The Shiznit Presents  Swingers  Doug Liman  Jon Favreau  Vince Vaughn  Events  Site News
Follow us on Twitter @The_Shiznit for more fun features, film reviews and occasional commentary on what the best type of crisps are.
We are using Patreon to cover our hosting fees. So please consider chucking a few digital pennies our way by clicking on this link. Thanks!