True: TheShiznit.co.uk are hosting a screening of James Cameron's underrated action epic True Lies on Weds 3rd April, 8.30pm, at the Prince Charles Cinema in Leicester Square. Lie: it will not be awesome.


TheShiznit.co.uk Presents: True Lies
with Arnold-themed 'fun' in the foyer
Wednesday 3rd April, 8.30pm
The Prince Charles Cinema, Leicester Square
Order tickets now - £6.50 (£4 members)
Yes. This is happening. On Wednesday 3rd of April, in London's glittering Leicester Square, us here at Team Shiznit will be making good on our promise to follow up Fight Club and Swingers with a third film screening: True Lies. Criminally underrated, True Lies is James Cameron's most successful movie ever, if you conveniently ignore Avatar, Titanic and Terminator 2. Bizarrely for such an ace film, this will mark the first time it has been screened in London since its theatrical release almost two decades ago and we're so totally stoked to have found an original 35mm print, just for you. 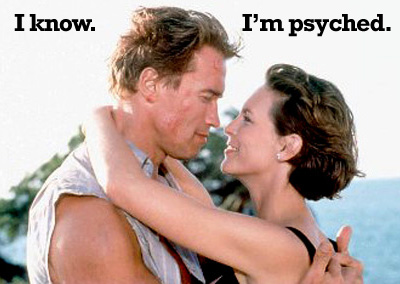 With Arnie mania sweeping the nation once more, there's no better time to revisit True Lies. A typically bombastic James Cameron romp, it's a sort-of Commando meets James Bond action adventure, with Schwarzenegger playing Harry Tasker, a government spy who has to keep his nation safe from terrorists while keeping his profession secret from wife Jamie Lee Curtis. Tom Arnold is in it too, but he's really funny. We promise.

Oh, and check out the new digs: The Prince Charles Cinema is one of the UK's most respected cinemas and has been frequented by movie lovers since 1991. It's the spiritual home of independent film in London, yet it's just a stone's throw away from the West End. Frankly, when it comes to watching movies of all sorts, I'd pick The PCC and its fantastic, passionate community over any other cinema chain in the country. (Don't worry, Picturehouse Cinemas: I still love you too). Tickets are just £6.50, or £4 for members, which obviously you already are because you're all cool dudes.

It should go without saying that, as it's a Shiznit film screening, you'll be getting much more for your money than just the film. Guys, 'fun in the foyer' is, like, totally my middle name [citation needed]. Exact activities are yet to be finalised, but rest assured, it'll be way better than my current terrible idea of throwing t-shirts at you. Let us guide you through a brief period of Arnold-shaped fun before we settle in to watch THE BEST MOVIE EVER MADE (if you conveniently ignore Jurassic Park and a few others).

Seriously. Arnie pilots a Harrier. Jamie Lee Curtis strips then hangs off a helicopter. Charlton Heston wears an eye-patch. Arnie tries to jump a horse off a roof. This is going to be off the freakin' chain. Be there.

More:  TheShiznitcouk Presents  Site News  True Lies  Arnold Schwarzenegger  James Cameron
Follow us on Twitter @The_Shiznit for more fun features, film reviews and occasional commentary on what the best type of crisps are.
We are using Patreon to cover our hosting fees. So please consider chucking a few digital pennies our way by clicking on this link. Thanks!