Tide yourself over with Mad Men season four and a half

Grrr, no more Mad Men till 2012. This is seemingly down to network bigwigs arguing about stuff. But don't just sit around cursing anyone who's big and/or wears a wig: we've spent literally minutes plotting out an entire 2011 season just for you. Could you maybe put on a suit while you read it? It'll probably help it along.

A man reckons he does something better than Peggy does, and laughs at her because of it. She then publicly proves that she can do the thing better than he can. This earns his grudging respect and he decides he wants to sleep with her. She says she doesn't want to sleep with him. Roll credits over 'All Woman' by Lisa Stansfield.
Episode 2: Valhallaland

Some significant cultural event of the sixties happens and the characters all react to it somehow. The moon landings, probably. Did they do the moon landings already? 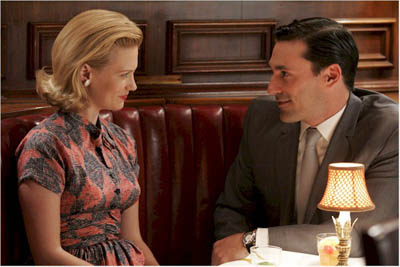 "We just put a man on the moon!"
"I know! Amazebags!"
"By the way, I cheat on you a lot."
Episode 3: Whatever Martin Luther King Said

Don meets Martin Luther King. The two of them head out and hit lower Manhattan, get drunk, have an awful lot of sex with hookers, and then at the end Dr King says something really profound that ends up being the episode title and you're like, "Wow, man. That shit is deep."
Episode 4: Memory Lane

Lane Price sits about and thinks a lot, remembering stuff that used to happen to him when he was younger. At first you think the punning episode title is a bit prosaic but then some douche at The Guardian points out how it actually works on a number of other levels you hadn't considered before, but he definitely had and he thinks that somehow justifies his existence.
Episode 5: Joan Gets Her Rack Out

Yep. Then she just sort of stands there for a bit. Smoking, probably. And saying something arch every now and then. 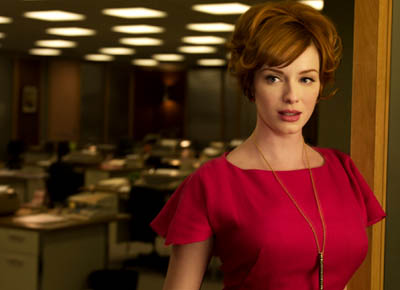 Come on, we were all thinking it.
Episode 6: Every Butterfly's Paintbrush is a Terrible Sunday Afternoon in Nova Scotia

Nothing much happens and you think it was rubbish, but later on you look it up on Wikipedia and you find out the episode title is a quote from a Robert Frost poem or something, and you're like, "Wow, man. That shit is deep."
Episode 7: LA Noire

Ken Cosgrove moseys about LA for a couple of weeks, solves a crime, roughs up a few crooks and does so all the while with incredibly realistic facial expressions. 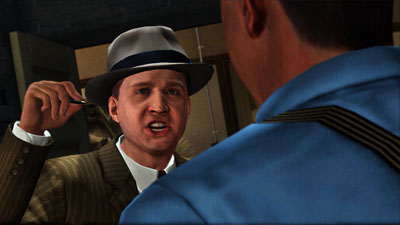 No idea what I'm on about? Ask somebody.
Episode 8: Emerald Bernstein

Everyone just sits around smoking fags for forty minutes. Crucially, they do so in a really postmodern way.
Episode 9: Conquistadors

Pete Campbell goes a bit batzoid because no one in the office respects him or his father-in-law doesn't like him or something like that, and sleeps with someone other than his wife. The one with the glasses or maybe the one who grew a beard but isn't in it any more finds out about it, and blackmails him, but then they all get drunk and in some way the whole thing's an allegory for, I don't know, McCarthyism or whatever. 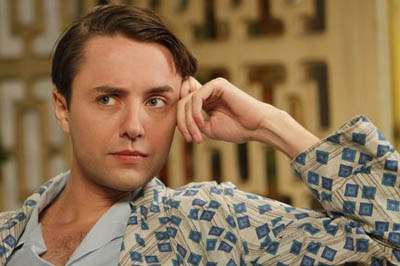 "My pyjamas are a MAJOR plot point, I tell you! Major!"
Episode 10: The Sharabang

It is strongly implied that we are witnessing the shifting cultural landscape of America by some event depicting a discriminatory injustice about which most of the characters are ambivalent; perhaps a racial attack or an incident in which a woman is expected to be subservient. But all the while you're mainly thinking: "Ooooh, they look ace in those suits."

More:  Mad Men  AMC  Sky Atlantic  Jon Hamm  Christina Hendricks  Vincent Kartheiser  January Jones
Follow us on Twitter @The_Shiznit for more fun features, film reviews and occasional commentary on what the best type of crisps are.
We are using Patreon to cover our hosting fees. So please consider chucking a few digital pennies our way by clicking on this link. Thanks!