Good news, the easily pleased! Mike Myers has revealed he's making another Austin Powers movie! Because his gold-plated mansion isn't going to build an extension on itself!


Fans of double entrendes rejoice, because Austin Powers 4 is 'coming' soon. (Get it? 'Coming'? As in spunking? I'll give you a minute). Hitfix are reporting that Mike Myers - last seen in comedy train crash The Love Guru - has signed on to reprise the role of the British secret agent with the wonky teeth. This is where a writer of less stature than I would add something like 'Shagadelic!' or 'Yeah, baby!' I will maintain a dignified silence.

If you happened to have travelled to 2011 in a time machine with no knowledge of movies after 1999, Austin Powers is basically a half-decent joke stretched paper thin: a groovy, James Bond-esque secret agent who thinks with his penis and gets occasionally hilarious, frequently sexy results. Or, in mathematical terms...

I was of the age to enjoy the first two Austin Powers movies for the tongue-in-cheek parodies they were supposed to be (still chuckle at the weeing joke in the first one), but I'll admit, I have absolutely no clue what threequel Goldmember was all about. The villain was a Dutch guy on roller-skates who had a golden penis and liked eating his own skin. Maybe that's taking the mickey out of one of the Bonds I haven't seen. The Welsh ones.

With a script in the works, we thought we'd give Mr Myers a head-start and think up a hilarious James Bond-themed title for Austin Powers 4 with added naughtiness to really push that 12A rating to the limit. 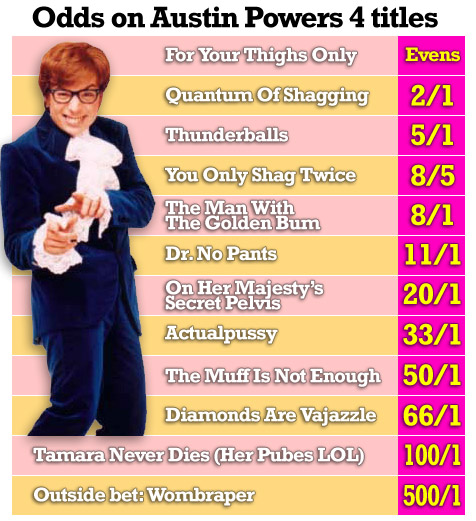 Caution: betting real money on these odds will result in idiocy


Of course, we could always wait and see what Bond 23 ends up being called: I'd like to see Myers come up with a rude take on The Hildebrand Rarity. Then he'd really be earning his money.

More:  Austin Powers 4  Austin Powers  Mike Myers  James Bond
Follow us on Twitter @The_Shiznit for more fun features, film reviews and occasional commentary on what the best type of crisps are.
We are using Patreon to cover our hosting fees. So please consider chucking a few digital pennies our way by clicking on this link. Thanks!